Derek Lowe looks at the recent failure of Pfizer's cholesterol drug, torcetrapib, and asks what it means for the future of pharmaceutical research

Derek Lowe looks at the recent failure of Pfizer’s cholesterol drug, torcetrapib, and asks what it means for the future of pharmaceutical research

The biggest story in the drug industry for 2006 took until December to announce itself, and many people immediately wished they’d never heard of it. Pfizer’s massive clinical failure with torcetrapib was more than enough of a catastrophe for everyone.

The drug, which saw its first clinical tests in 1999, appeared to sail through subsequent trials which proved torcetrapib could boost the amount of ’good’ cholesterol, or high-density lipoprotein (HDL), in patients. 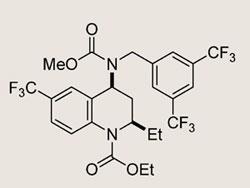 But on 2 December, Pfizer announced that the latter stages of Phase III trails had shown an increased risk of mortality and cardiovascular events in people taking the drug, and immediately stopped all clinical trials.

The drug works by inhibiting cholesteryl ester transfer protein (CETP), which regulates the exchange of cholesterol and triglycerides between plasma lipoproteins. Less CETP activity essentially means more HDL, which helps to reduce the build up of fatty atherosclerotic plaques that block blood vessels. This mechanism nicely complements drugs that reduce the body’s levels of low-density lipoprotein, such as Pfizer’s own blockbuster statin, Lipitor.

Inhibiting CETP has been a target for drug development teams for many years now. A number of companies have had compounds in this area, but many have fallen by the wayside, often for reasons that haven’t been made clear. One difficulty has surely been the nature of the protein itself. Built for binding lipids, most of the compounds that can alter its function have to be large and greasy themselves, and that never helps a drug’s chances. Those properties mark a compound as a foreign interloper, and affect everything from the time the compound reaches the gut to the rate it’s cleared from the bloodstream.

People are spending hundreds of millions of dollars to find out more about CETP. Roche (with their partners at Japan Tobacco) and Merck are known to be in the clinic with CETP inhibitors of their own. It must not have been a fun weekend around their clinical departments when the Pfizer news broke. If torcetrapib’s failure had immediately doomed the competing compounds, at least the pain would have been over with in one shot. But all the competing companies are going to have to live in a thick atmosphere of fear and hope for some time, because - as could be carved in stone over the doors of clinical research departments everywhere - it isn’t that simple.

For one thing, it’s not clear whether torcetrapib failed because of its CETP activity, or just because it there was something odd about torcetrapib itself. And there’s an added complication - the trouble only showed up in the patients that were also getting Lipitor, which means that drug-drug (or mechanism-mechanism) interactions can’t be ruled out yet.

What really obscures things is that Roche’s compound seems to act on CETP through a different mechanism, and thus probably through a different binding site. We’re going to know a lot more about HDL and cholesterol trafficking by the time all this is over, and we’ll certainly have paid to find out.

There’s a lot of money riding on such mysteries, and yet no one has the slightest idea how everything will play out. It’s this ’place-your-bets’ atmosphere that drives upper management insane all across the business. Compared to some industries, it’s like making a living by staggering blindly around in a casino, waving a wad of cash in one hand and a fistful of test tubes in the other. It’s tempting to think that modern management techniques, better scientists, or more software must surely make this stuff manageable, but nothing has worked so far.

Just ask Pfizer. The largest drug company in the world just lost what could have been their biggest-selling drug ever, and only time will tell whether the clinical disaster was avoidable. But for now, everyone in the field is holding their breath, because nothing’s obvious and nothing’s for certain. You could carve that in stone, too.