Fizzy drinks were an instant hit, but could their tongue-tingling success be captured in solid form?

Alcohol has always been a popular drink, and is traditionally made by fermenting various plant parts. One of the invariable by-products is carbon dioxide gas – it is responsible for the foamy head on top of a pint of beer, as well as the bubbles in champagne. During the 18th century, carbon dioxide itself began to be considered a tasty product. It is significantly soluble in water, and the solution can be a drink. Joseph Priestley discovered that water suspended over a beer fermentation tank absorbed carbon dioxide, and became more palatable. As gas technology advanced it became possible to pump the gas under pressure into water, which dissolved a lot more carbon dioxide. The solution, like carbon dioxide itself, was slightly acidic. It could be made more palatable still by adding a feeble alkali, such as bicarbonate of soda, to counter its mildly annoying acidity (hence the name ‘soda water’). One unexpected chemical effect that made the solution a firm favourite was supersaturation. A strong solution of carbon dioxide has to be kept under pressure (siphons and bottles contain it at about 6 atmospheres). When poured at atmospheric pressure, a lot of the gas remains dissolved although it readily bubbles out. This supersaturated ‘fizziness’ adds a new and interesting physical sensation to a drink. 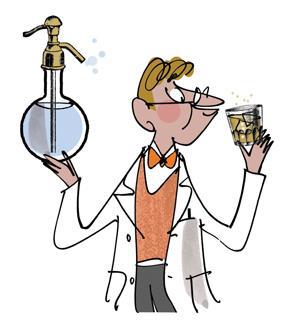 Fizzy drinks took off dramatically. Soda water became a standard mixer for cocktails, and a necessary fixture in bars. Gas carbonation became an important process, even for making soft drinks – of which most these days are routinely sold under pressure as ‘carbonated beverages’. The polyester bottle, which withstands pressure much more readily and safely than glass does, was another chemical invention which helped to spread soda water and other fizzy drinks widely.

But pumping carbon dioxide into water under pressure needs all sorts of complex gas gadgetry. In 1957 a chemist, William Mitchell of the US company General Foods, had the idea of making a solid powder which could be dissolved in water to make a fizzy drink. He came up with a scheme for pumping carbon dioxide into melted sugar under about 40 atmospheres of pressure, and letting it set. The result was a ‘fizzy solid’. A gram of Mitchell’s sugar contained about 2cm3 of carbon dioxide dissolved in the crystal lattice, and about 4cm3 of the gas as tiny bubbles. General Foods was greatly intrigued. Sadly, it did not dissolve in water to make a good fizzy drink. Maybe it could not hold enough gas. But put on the tongue, it had a strange and appealing fizzy ‘mouth-feel’ as the bubbles expanded. It suggested a number of interesting new sweets. General Foods patented it and tried to sell the patents to sweet makers, but without success. Only in 1978, when the patents were about to expire, did General Foods take the plunge itself, and market the stuff as a sweet. In the UK it was sold as ‘Space Dust’, and was mainly aimed at children.

The sweet was greatly successful at first, and carved out a significant niche of the market. It had to counter an entirely false claim that was sometimes made about it – Space Dust was said to evolve so much gas internally that an enthusiastic consumer might explode! General Foods soon proved this claim to be absurd and wrong. More significantly, however, its shelf-life was limited – I suppose the gas slowly escaped. In 1983 the company stopped selling it, but it still exists as the ever popular ‘popping candy’ which is enjoyed embedded in chocolate, on top of cakes or simply alone by fizz fanatics everywhere.