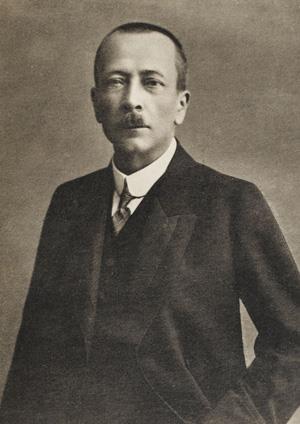 Getting older you notice that things have changed in size. While cars, people and NMR magnets seem to be getting bigger, many tools that we use in the lab have shrunk and become more powerful. This trend was recognised surprisingly early in the Nobel prize awarded in 1923 to Fritz Pregl, the man who shrank elemental analysis.

Pregl was born in Laibach, today’s Ljubljana, one of the cities of the Austro-Hungarian empire. He lost his father, a bank manager, as a small child and was brought up by his rather severe mother. A top student in secondary school, he studied medicine in Graz, where Ludwig Boltzmann was among the faculty. By the time he graduated in 1894, Pregl had caught the attention of the professor of physiology, Alexander Rollett, and became one of his assistants.

Pregl began working on cholic and other bile acids. As he struggled with the research, his interests began to take a strongly chemical slant. When Rollett died suddenly in 1903, Pregl acted temporarily in his stead, but once a permanent replacement was found, Pregl decided to broaden his horizons.

Embarking on a chemical expedition across Germany, he visited the physical chemist Wilhelm Ostwald in Leipzig, studied the carbon monoxide adducts of blood pigments in Tübingen with Gustav von Hüfner, and then spent time in Berlin with Emil Fischer, Germany’s leading organic chemist. During his time in the German capital, Pregl worked alongside Emil Abderhalden, with whom he developed a firm friendship and collaborated on the characterisation of the hydrolysis products of albumen.

Returning to Graz, he continued to work on the composition of biological materials, but with samples that were only available in minute quantities, the traditional tools of organic analysis such as Justus Liebig’s absorption tube were simply inadequate. Pregl realised that he needed new, more sensitive analytical procedures. The first hurdle he faced was to find a balance to weigh small amounts of material.

Microbalances were a hot topic. In 1903, Walter Nernst, today remembered as an electrochemist, reported a quartz fibre torsion microbalance. The design was improved by Pregl’s colleague in Graz, Friederich Emich, who had written the first textbook of ‘microchemistry’. But  although exquisitely sensitive, it could only weigh tiny samples.

Instead Pregl turned to the Hamburg-based instrument maker W H F Kuhlmann whose balance was capable of weighing up to 20g of material to a precision of 1mg. It was a twin pan balance housed in a double casing to shield it from draughts and changes in temperature. The beam which carried the minuscule riders had a long pointer that hung down between the pans. The pointer oscillated slowly back and forth, and was read with a small telescope. The design would become the analyst’s microbalance of choice for decades after, with air, and later magnetic, damping introduced.

Pregl now turned his attention to Liebig’s combustion method for determining carbon and hydrogen compositions. Samples were placed in a tiny platinum boat in a narrow tube of hard Jena glass and heated strongly in a gentle flow of purified air, which had passed through a bubbler of caustic potash and then a U-tube packed with ‘peppercorn-sized’ granules of calcium chloride. Alternating layers of copper oxide, platinised asbestos and lead superoxide ensured complete conversion to CO2 and water. The gas then passed to little absorption tubes packed with calcium chloride and potassium hydroxide. The tubes were weighed after each determination and reused many times. But above all, analyses could be done on samples one hundredth the previous size.

Pregl worked almost entirely alone, making the most of the delicate manipulative skills he had developed when training as an eye surgeon in medical school. He was also an outstanding glassblower. By 1912 he had a complete system of analysis that included nitrogen and sulfur. 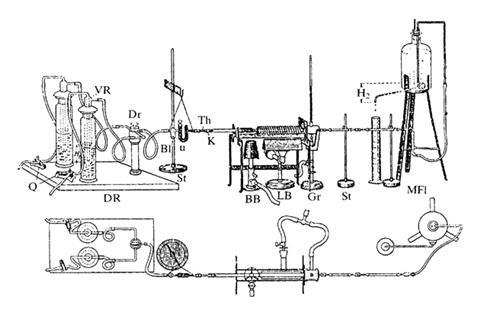 Intriguingly, in a chapter contributed to Abderhalden’s series on biochemical methods, Pregl describes a device for drying samples that is an exact copy of the design by the Czech chemist Ludwig Storch, though Pregl does not mention its inventor. Ironically, the ‘drying pistol’ would eventually become associated with Abderhalden instead.

Pregl’s methods expanded to include tests for organic functionality and micro­chemical determinations of many elements; the Nobel prize was a tribute to the revolution that his methods brought to laboratory practice. In 1962 Wilhelm Simon and his colleagues in Zürich automated Pregl’s process, replacing the absorption tubes with a gas chromatograph and thermal conductivity detector. Though Simon’s prototype was the size of an SUV, it could analyse 200 samples a day. Within a couple of years, commercial versions were sitting on the lab bench.

It just goes to show that size does matter.

I am grateful to Bill Brock and Alwyn Davies for discussions about ‘old school’ analysis.