Progress at the pace of the slowest

Chemistry is rarely the rate-limiting process in getting a drug to market, says Derek Lowe

I’ve written before about the mental adjustment that many new medicinal chemists have to make when they begin a career in drug discovery. Chemistry is a means to an end in drug research, not an end in itself, and that can take some getting used to. Beyond each individual’s experience, though, it’s worth thinking about where chemistry fits into the big picture.

Chemistry is not cheap, but there are more expensive things. And nothing in drug R&D can touch the outlays needed for a complete set of clinical trials. Those get more and more costly as the process goes on, making a big Phase III program a very serious thing to undertake (and beyond the means of many smaller companies on their own). But by the time you’re in Phase III, most of the chemical questions have been answered – if they haven’t, you have major problems. Answering them will have cost the company a lot less money than the decision to push forward into human trials. To be honest, all the expense of the classic preclinical medicinal chemistry work can be a rounding error compared with what’s spent in the clinic.

If the money is largely spent downstream of chemistry, what about the time? Some projects, it’s true, do spend quite a while in the preclinical wilderness before going into trials, but it’s not always the chemistry that’s slowing things down. Assay development, animal models, formulation and toxicology studies are equally likely candidates. Time is money, for sure, but chemistry is rarely the real rate-limiting step. 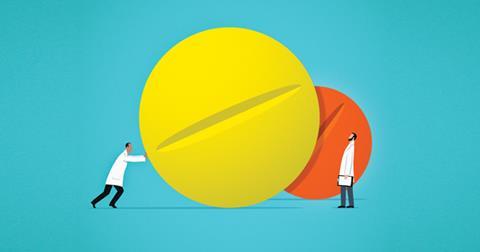 So how much can cutting costs at the chemistry-intensive end of the process accomplish? Well, every department has its own budget, and savings can look significant when they’re isolated like that. But having one extra Phase III success every few years (or one fewer failure!) would make up for anything a chemistry budget can accomplish, and far more besides. That doesn’t stop such budgets from getting cut and rearranged anyway, however, because the savings are tangible and immediate. Clinical successes and failures are pies in the sky, pies of rather divergent flavour, and they take years to materialise, if ever. But layoffs and cutbacks are guaranteed to show up in the next quarterly earnings report. The bad effects are diffuse and delayed, since no-one ever sees the projects that don’t get run.

Given this state of affairs, then, how much time should we be devoting to improving medicinal chemistry? That depends on what improvements are being proposed. New, faster ways to make the types of compounds we already know how to make are probably going to have minimal effects. The best hope is if chemistry can be directed towards something that affects clinical success, because very little else really matters. Of the two major reasons for failure, though, lack of efficacy in Phase II is almost entirely a biological problem. And toxicology problems in Phase III are the same, unless there’s something about particular chemical structures that make them more likely to be troublesome.

There we have the driving force for nearly all the talk about chemical properties in early-stage drug discovery: the hope that toxicity surprises can be diminished if you make sure that your compounds are in a certain region of property space. It’s an appealing idea, but the evidence is not very strong so far. A 2008 paper from Pfizer1 helped to popularise the connection, but a more recent study from AstraZeneca2 can’t reproduce the Pfizer trends at all. That’s quite worrisome – odds are that if two large datasets can disagree on a topic like this, it means that there is no strong effect there to be discovered.

All we can apparently say, then, is that there are some broad trends that we didn’t need a ghost from the grave to tell us about: higher molecular weight compounds are gradually less successful, for example. Thanks so much! This has been clear for decades, in as much as a correlation with so many exceptions in it can be called ‘clear’. But if we really can’t correlate aromaticity, polarity, solubility and other properties with clinical success, where does that leave us?

Back to where we began, I’d say. Back to relying on our wits and all the hard data we can get, and treating every new drug candidate on its own merits, case by case.
Is that such a bad thing?