Pandemic conditions led to my longest hiatus from the chemistry bench in nearly 40 years, going back to my undergraduate days. To be sure, I have not been cranking out piles of analogue compounds in recent years, but I do like to keep my hand in, and I enjoy running reactions. Turning one substance into another has never quite stopped feeling a bit like sorcery. But among the things that I have missed the most was another sorcerous aspect: the familiar smells. 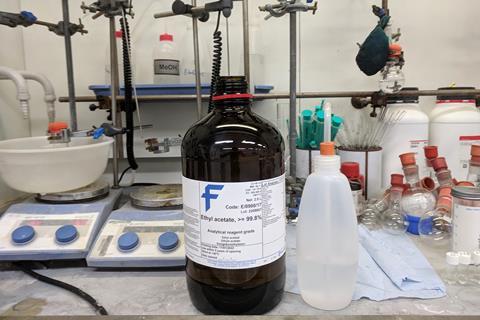 Can you smell this picture?

That might sound a bit odd to someone who’s not a chemist, I admit. The science has a reputation for producing some strange and intense nasal experiences, and I’ve certainly had my share. But after all these years, the cheap-fruit-candy smell of ethyl acetate and the familiar clean-glassware note of acetone from the wash bottle are like old friends, and I felt the lack. It’s not that I have such an amazing sense of smell: I’ve had colleagues who could distinguish things like acetonitrile and methanol, and I can’t say that I pick up anything from either one. But you don’t need a sensitive nose to appreciate most of what an organic chemistry lab has to offer; I believe we can all agree on that.

The cheap-fruit-candy smell of ethyl acetate and the clean-glassware note of acetone are like old friends, and I felt the lack

The sense of smell is famously tied to memory. But it has to be said that many of chemistry’s smells don’t remind a person of anything other than more chemistry. An old university lab I frequented in 1982 had a pungent reek that had permanently attached itself to every fixture in the room. Perhaps three or four times since then, I have been unexpectedly transported back to that era by something similar. Once or twice I’ve even come across smells that reminded me of the miscellaneous collection of chemicals I had when I was about 12 (powdered sulfur being a key ingredient). Both times the experience stopped me in my tracks, as a sudden trip back to the summer of 1974 would tend to.

There are some non-laboratory memories here and there that can also be called up. For example, some low-molecular-weight carbohydrate compounds smell a great deal like various grades of maple syrup. To be more accurate, maple syrup probably smells like them – I would not be surprised if they or some close analogues were present in the real product. On the other hand, I was once startled by a pyridine derivative that smelled exactly like a brand of corn chips that my family used to buy back in the 1970s (this is not an endorsement). And while there are a lot of small heterocycles that add smell and taste to cooked foods, I’m still not sure if that one was anything but a coincidence.

When you find yourself getting nostalgic about alkyl thiols, you know that you’re in a bad way

I have certainly not encountered any snack foods that remind me of pyridine itself, and for good reason. Those who have encountered it will know that it smells truly awful, with no redeeming qualities whatsoever. They will also be at a loss for words if they try to tell you what it’s like. Pyridine is in a class of its own, impossible to describe in terms of any other smells. Low-molecular-weight isocyanides and trialkyl phosphites are in that category as well. Even though you’ve never smelled anything like them, no time is needed to form an opinion of their profound demerits. Sulfur compounds of all sorts are famous in that way, even among non-chemists, so I’ll pause only to (dis)recommend cyclopropylmethanethiol, the final step of whose preparation included an unusual burnt component as if someone had been incinerating a pile of deceased skunks. Not very recently deceased ones, either, now that I think about it.

When you find yourself getting nostalgic about alkyl thiols, you know that you’re in a bad way. I’m not quite to the point of wanting to experience that one again. The pyridine can wait as well. Just the day-to-day smells of lab work will be enough for now, since I’ve been deprived of them. Bring on the ethyl acetate, then, since it’s at least a lot safer to encounter than its usual solvent partners like hexane. And truth be told, I could use a bit of that 1974 too, if there’s still any to be had.