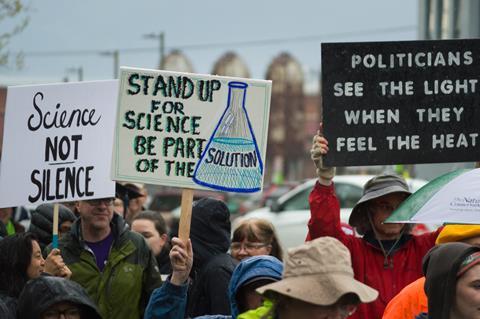 The Trump administration is in the news again, upsetting environmentalists and scientists amid reports that the term ‘climate change’ is being suppressed by government departments and new questions over whether the US is in or out of the Paris climate accord. Trump made no secret of his contempt for expertise on the campaign trail and in office he has continued in this vein. As Isaac Asimov had it: ‘Anti-intellectualism has been a constant thread winding its way through our political and cultural life, nurtured by the false notion that democracy means “my ignorance is as good as your knowledge”.’ That was in 1980 and I fear little has changed since then; anti-intellectualism remains a worldwide phenomenon.

This month we reported that academics in India fear the growing strength of Hindu nationalism, emboldened by the premiership of Narendra Modi. Some ancient Hindu beliefs are now being uncritically added to courses at top universities. And the government has publicly lent credence to pseudoscientific beliefs such as astrology and Ayurvedic medicine, as well as introducing an unusual and uncritical focus on the health benefits of mixtures of cow products – everything from milk and butter to urine and manure.

The UK itself has had a similar dalliance with pseudoscience in universities and healthcare courtesy of homeopathy. A number of universities offered courses on homeopathy, much to the annoyance and even outrage of many scientists and defenders of evidence-based medicine. Hospitals backed by public funding were even prescribing these ‘treatments’ to patients despite study after study showing that they are no more effective than a placebo.

The backlash against homeopathy in the UK was spearheaded by scientists and medical professionals, who demanded that therapies be based on evidence, not obscurantist 18th century bunkum. Their tireless work lobbying government and talking to the public and press helped to end the prescription of homeopathy. Since then most universities have wound up their homeopathy courses.

In India, there are now similar promising signs that scientists are organising to oppose the promotion of unscientific beliefs. Such action is not for the faint-hearted: some of the most vocal and prominent rationalists and critics of Hindu nationalism have been murdered. The working theory is that right-wing nationalists were behind the killings but no one has been brought to justice in the high profile cases. Yet as one Indian scientist notes, if we don’t defend science then who will?