Nascent substances have unique properties, and some age faster than others

The compounds we handle as chemists usually come in bottles. They are simple and stable solids and liquids, and have often been there for months. By contrast, newly made chemical substances are often ‘nascent’, and far more reactive than later.

The lung disease silicosis, one of the many hazards of coal mining, occurs because the hewing of coal releases ‘nascent silica’ from the rock. The miner breathes it in, when it can start lung damage. It takes maybe half an hour for the newly-hewn silica particles to lose their biological danger. Another example is the fire extinguishing agent Monnex, a dry powder made by dissolving potassium bicarbonate in molten urea, letting the solution set, and grinding the solid up. 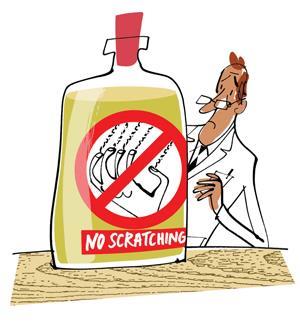 When you put the powder in a flame, the urea evaporates. It precipitates the potassium bicarbonate as millions of tiny crystals, which collectively have a huge total surface area – many hundreds of square metres per gram of solid. All that huge newly created surface area is dense with nascent and reactive instabilities: electrons, holes, incomplete molecules and so on. We refer to them collectively as free radicals – incomplete and highly reactive molecules (such as •CH3 or •OH). Fire itself is a gaseous free radical reaction. It generates only a tiny proportion of free radicals, but as a chain reaction it is propagated through the air by them. The sudden huge new powder surface Monnex creates reacts with many of those free radicals. By combining with them and removing them, it damps out the fire.

Nobody seems to have invented a good theory of nascence in solids, but chemists often exploit it informally. Most of us know the trick of crystallising a solid from its solution by scratching the glass wall of its container. It probably works by releasing nascent silica or ‘nascent glass’ particles which start the crystals growing. Diazomethane, that useful but dangerously explosive reagent, may also be set off by scratching the glass wall of the container holding its solution. In these cases, the glass or the silica seem to lose their nascence in seconds.

Every solid must start off nascent. Imagine a newly-formed bit of solid – a crystal, say. When first created, it will have an incomplete and unstable surface, and will need to reach some sort of chemical equilibrium with the fluid around it – which may be the solvent it crystallised from, or may be the air. I imagine that it will react with that fluid to produce, perhaps, a monolayer of oxide. Or it may attract water vapour from the air, and form a monolayer of hydrate.

The chemist making it will notice nothing. That small surface area of monolayer will not affect its chemical properties in any obvious way, and the analysis, which is conducted on a weighed sample of bulk material, will not register it either. Nonetheless, every solid must be impure because of that monolayer. Only in a few special cases, such as Monnex, do we make crystals so small that the surface starts to matter.