The people in our care

What makes a good boss? It’s an important question. And, hidden among the hailstorm of stressors in research, one that is often neglected.

Some years ago, a conversation gave me pause to consider leadership more deeply than I ever had before. Walking the streets of an American metropolis, sun-kissed by summer and protected by the towering buildings casting strips of shade, I was enjoying a chat with a friend. During our pleasant stroll among the pedestrians, buskers and car horns, I asked how things were going now she was finishing her PhD. What was she working on? What did she want to do next? Was she having fun? I was genuinely curious and poised to hear what she had to say. 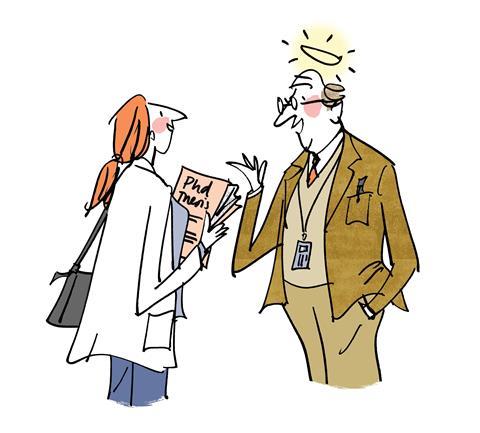 But where I had placed the cues for a response, none came. A silence fell. In the unexpected hush, I became conscious that we hadn’t really made much eye contact during our walk. Relaxed in our stride, we had been talking to each other while looking at the ground and the sights of the city, never turning to face each other. Now, in the silence, I raised my head and looked over to my friend to see why she had become so quiet. She was still looking to the ground. We passed out from the shadow of a lofty skyscraper and crossed into to the chasm of light-soaked roadway. Only then, under the brightness of unblocked sunlight, could I see the tears in her eyes. She was crying.

I had expected my questions to reveal an interesting, unique story of science. Instead, I had unwittingly made my friend reflect on a painful and unspoken truth. Through the amorphous noise of the streets, her timid and trembling story emerged.

My friend worked with a supervisor whose leadership priorities were all wrong. The supervisor had never once complimented her work or acknowledged the contributions she had made to the research programme. He paid little attention to the group culture or to making his expectations clear. When communications broke down, he always had someone else to blame – it was never his fault.

My friend’s spirit was broken. This fiercely intelligent scientist was not thinking about her valuable contributions, her stellar publications or her wonderful, welcoming character; she was lost in the dark neuroticism of self-doubt, wondering if her supervisor was actually right to be so cruel. What if she wasn’t smart enough? What if it would be better for her to give up now?

As I listened on, I was consumed by the paradox of what she was saying. She clearly had a promising career ahead, but was now on the verge of surrender. She had been so drained by her PhD supervisor’s poor leadership that she was ready to leave her life in research behind.

Or so I thought. To my relief, she went on to tell me about her proposed postdoctoral supervisor, with whom she had been preparing a collaborative fellowship application to join his group after her PhD. During their meetings, this new colleague would offer constructive criticism on my friend’s writing. He would point out strong parts of her proposal and provide help on areas that needed improvement. Summarising the honesty, encouragement, and attentiveness of her new supervisor, she uttered words that I will never forget: ‘These words… they mean the world to me.’

Through the tears and the pain, she now felt relief, happiness and hope. In that instant, I thought about the kind of leader I would be to my own emerging research team. I was paralysed by the prospect of acting anything like my friend’s reckless PhD supervisor, but lifted with the promise of being like her prospective postdoctoral supervisor. With clarity and attentiveness, this new mentor had uttered words that meant everything to a person not yet fully in his care.

As we crossed the streets one thing became clear to me. Management and leadership are not the same thing. It takes little training to point the finger and tell someone what to do. Becoming an empathetic, encouraging and challenging leader takes infinitely more effort and attention.

If we, as leaders, remember only one thing, it should be this: one day, our words could mean the world to someone, too.