Thank you for smoking

Smoking foods may have its roots in preservation, but its chemistry can produce a range of delicious tastes, says Ali Bouzari 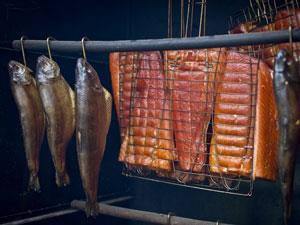 Salmon (Salmo salar) is ideal for hot smoking, although the temperature, smoke composition and meat dehydration

Lightning strikes in a pine forest and a conifer erupts into a fiery blaze. Bits of charred matter float into the air, raising an airborne distress signal. Downwind, every living creature breaks into a panicked dash, for the smell of smoke heralds the approach of a deadly force that doesn’t distinguish predator from prey. Humans are the only exception.

Having long ago conquered fire and its destructive power, smoke makes us think ‘bacon’ when every other animal thinks ‘danger’.

Smoke represents one of the deepest wells from which we can draw flavour for our meals. We first began smoking our food for survival – the antibacterial and antioxidant properties of smoke stave off rancidity as well as spoilage, allowing food to be preserved. While refrigeration, canning, and other methods of food preservation have eliminated that uncertainty in many parts of the world, a lingering craving for the flavour of smoke remains embedded in our minds.

Combustion, the fundamental chemistry of fire, is fairly straightforward when we’re burning simple substrates. Hydrocarbons combine with O2, then decompose to yield CO2, H2O and heat. Heat causes carbohydrates, proteins and lipids within our food to decompose and create the delicious tastes and aromas of cooking. However, these are all indirect contributions to flavour because perfectly efficient fires produce nothing but odourless compounds and thermal energy. To access the complex cocktail of aromas contained within smoke, we need to lose some of that efficiency; we need the fire to struggle.

The flavour of smoke is derived from incomplete combustion – the remnants of substrates unable to be broken down into tidy packages of CO2 and H2O. These leftovers are spat out as a mixture of solid particulate and volatile compounds, lifted skyward by a rising current of hot air. Historically, desperate cooks have relied on everything from bison bones and sheep dung to moss and dried seaweed to fuel fires, but the substrate best suited for making delicious smoked food is wood.

Wood is primarily made of the carbohydrates cellulose, hemicellulose, and lignin. These chains of sugars are sturdy, so they break down slowly, depolymerising before the individual monomers fragment further into a complex mixture of tastes and aromas. Cellulose, a homopolymer of glucose, is the least chemically complex constituent of wood. It yields a fairly bland mixture of aldehydes that form part of the background flavours of wood smoke. Hemicellulose and lignin are comprised of several different types of sugars with variable linkages between them, so they are more likely to decompose into a spectrum of aromas: from clove and vanilla aromas like eugenols and vanillin to buttery diacetyl and fruity organic acids. Some aromas are so readily gleaned from wood pulp that imitation vanilla and clove flavourings have been made as a byproduct of paper processing.

The heterogeneous structures of hemicellulose and lignin also vary between types of wood. This natural variability is why woods like alder, cherry, hickory, and mesquite generate different flavour profiles when burned.

Once we’ve selected a wood, temperature and oxygen are the primary factors that affect the flavours we can generate. Low temperatures and lack of oxygen produce an acrid-smelling mixture of compounds like acetic acid and formic acid that become unpleasantly sour when dissolved on the surface of food. Larger quantities of oxygen allow combustion to proceed more rapidly, but if the temperature climbs too high many of the desirable aromatic compounds become too short-lived to make a meaningful impact on the flavour of the food. The ideal temperature for most smoke generation is around 400°C – high enough to decompose lignin, yet not so high that delicate flavours are completely incinerated.

In the kitchen, we can introduce smoke flavour by two methods: hot smoking and cold smoking. The difference between these two techniques lies in the different temperatures of smoke when it interacts with the food. Both techniques stick to the 400°C sweet spot for smoke generation, but in cold smoking, that smoke is then funneled towards food in a separate, chilled chamber. This technique is best suited for foods that can’t take too much heat – for example cheeses, delicate fruits and even olive oil. 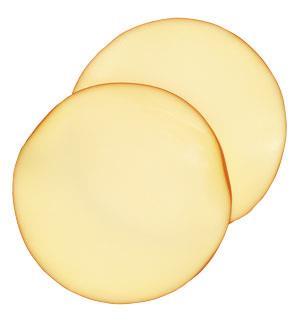 Cheeses are best suited to cold smoking, as this protects the food against the high temperatures required during the smoking

In hot smoking, the food is held in the same chamber as the smoke, so the residual heat of combustion also heats the food. The heat of hot smoking allows the food to contribute additional flavour in the form of Maillard browning. Controlling cooking temperature, the composition of the smoke and the rate of dehydration of foods in a hot smoker is a delicate, high-wire balance act that can yield sublime smoked salmon, barbecue brisket and smoked sausages.

Because of the difficulty of controlling so many variables simultaneously in hot smoking, many home cooks opt to first try their hand at cold smoking, thus decoupling the cooking and smoking processes. A wide variety of cheap cold smoking gadgets are available, including refrigerated cabinets and handheld smoking guns that use a small fan to waft flavourful smoke from a small chamber of smoldering woodchips.

Whatever the provenance of the smoky volatiles, those aromas need a comfortable place to land in order to adequately flavour a dish. Smoke flavour is comprised of both hydrophobic and hydrophilic constituents, so foods with reservoirs for both types of compounds are best suited to capture the full spectrum of smoke flavour. Water is abundant in most foods, so hydrophobic constituents such as proteins and lipids are often the keys to smoking success. Meat, dairy and eggs are thus naturally suited for smoking, but brushing any food with oil or fat allows us to capture the flavour that most definitively separates us from other animals and links us to our innovative ancestors. 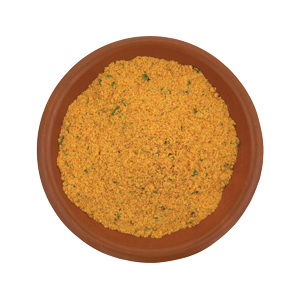 This simple recipe allows home cooks to experiment with smoke flavours in a wide variety of applications without any additional equipment.

While there is no perfect substitute for the flavour of true, live fire smoking, there are several smoke powders currently on the market that are an improvement over traditional liquid smoke flavourings, which can often yield harsh, one-dimensional flavours. Most smoke powders also use some form of starch-derived maltodextrin as a bulking agent, so they have the added advantage of stabilising the emulsion in a vinaigrette.

Using your favourite combination of vinegar (sherry, cider or red wine) and a neutral-flavoured oil such as canola or grapeseed, this vinaigrette can be used as a dressing, marinade or sauce for everything from salads and soups to grilled vegetables and roasted meat. 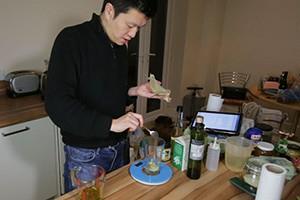 1. Whisk together the vinegar, mustard, smoke powder and salt
2. Slowly drizzle oil into vinegar mixture while whisking to form an emulsion
3. Store in refrigerated, sealed container for up to one week
4. Agitate the vinaigrette to re-emulsify before use
5. Enjoy