Smoke in the water

Yuandi Li puts our smoked vinaigrette recipe to the test

‘Can you actually smoke water?’ asked my housemate.

‘Of course, why not?’ I responded derisively, knowing full well I’d have asked the exact same question before reading this month’s The Hot Plate.

Like many beloved cooking techniques, smoking was originally a method for preservation. These days, we just love the aroma. It’s reminiscent of both summer and winter and adds a welcome dimension to many fatty foods.

This month’s recipe is for smoked vinaigrette, using smoke powder. However, I was also intrigued by his remarks about water and fat taking on different flavours from smoking I decided to try it for myself.

I placed a jug of water and a ramekin of flavourless oil into a large basin. I started the smoking process by heating oak chips in an aluminium foil parcel over the hob. Coughing and crying, I transferred the parcel to the basin and covered it tightly. After 40 minutes I uncovered the basin and repeated the process twice using the same chips. (I’ve since heard that similar results can be obtained without the coughing and crying). 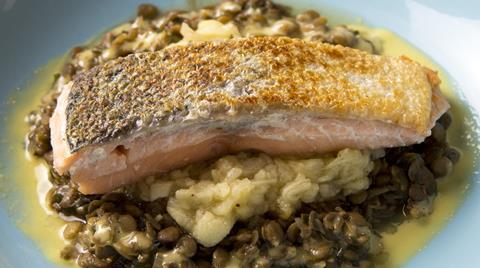 Vinaigrette is a classic salad dressing. In its simplest form, it is one part vinegar to three parts oil, shaken to create a temporary emulsion. However, most will also contain mustard, which acts as a surfactant and prolongs the emulsion. Although you can use any vinegar and oil for the recipe, I decided to keep it neutral with white wine vinegar and a light olive oil to allow the smoke flavour to come through.

I cooked lentils with the smoked water and flavoured it with chives and balsamic vinegar. This was served with roast salmon and a puree of charred aubergine. The vinaigrette was drizzled over to finish the dish, completing a hat-trick of smoke (powder, wood smoke, charring). I found the powder to be surprisingly forgiving. Without scales sensitive enough to weigh out 0.5g, I simply added the powder to taste, doubtless exceeding the prescribed amount. I thought the smoky flavour worked well with the acidity of the vinegar and the piquancy of the mustard.

I also compared the smoked water and oil. The differences were night and day. The water was acrid, with a harsh ash-like aroma, whereas the oil was smoother, more fragrant and altogether more recognisable as food (imagine smoked salmon without the salmon). Neither were unpleasant, but the water was borderline overwhelming. However, it did work well with the lentils, which were able to soften its harshness.

Vinaigrette made with smoke powder

The best thing about the recipe was how easy it was, even without proper equipment, and it’s a good platform for experimentation; I’m sure infusing the oil with some herbs and garlic would work really well; a charred steak served with a simple salad dressed with the vinaigrette to accentuate the meat’s smokiness could be spectacular.

If you give smoking a go (and I would recommend it), just make sure those under the same roof are happy with living with the smell for about a week! Otherwise, smoke powder (liquid smoke is also available) is a fine substitute and a useful addition to the kitchen.