If artificial intelligence can revolutionise chess, what might it do to chemistry? 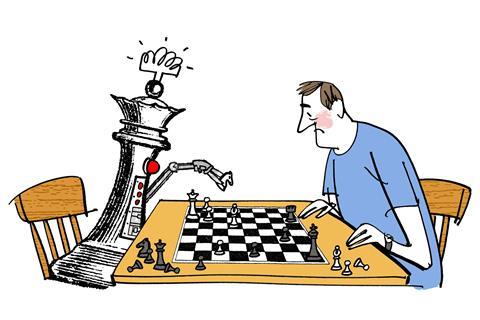 Elegant retrosynthesis is an artform, it is strategic: you need to plan ahead, but also be able to adapt, if reactions do not work out. When the lockdown in 2020 started, I came upon those very same patterns in completely different field – chess. With everyone stuck at home, online chess suddenly became highly popular, especially after the release of the series The Queen’s Gambit. My friends and I were among those who gave it a shot. Out of curiosity, I also read a bit into the history of the game: interesting anecdotes, big names like Paul Morphy or Bobby Fischer and – around 25 years ago – the rise of the machine, as Deep Blue became the first computer to beat a reigning world champion, Garry Kasparov.

As I went deeper down the rabbit hole of chess, I talked with a colleague about the use of machine learning in chemistry. With Deep Blue on my mind, I was a bit worried: Will all my years of study be useless if artificial intelligence (AI) takes over research as soon as I finish my degree?

I think this fear of the ‘rise of the machines’ lies in many people. Hollywood has added more than its fair share to that with villains like Skynet in The Terminator. Frankly, with only malevolent examples like that and my future job at risk, I was also infected by that fear. Therefore, to follow The Art of War, I decided to get to know my rival better and read into the topic.

In contrast to AI in the classic sense, where the program follows predefined laws, machine learning predicts outcomes from patterns and parameters it has found itself in the data it has been fed. The more data you feed it, the better the result. Deep Blue, for example, had a predefined database of chess openings but also analysed thousands of chess games itself to perfect its decision-making.

The machine learning approach proves useful in any field where there is a lot of trial and error, such as research and development in the pharmaceutical industry. There, AI is already used to predict the properties of molecules or to design compounds with similar effects to known drugs. The method becomes even more powerful when combined with other prediction systems or empirical data in a process called stacking. Even problems that are simply too complex for the human mind, like protein folding, can be simulated with AI. Machine learning programs are so far unmatched in processing the plenitude of parameters required in these tasks ­– and even they are not always 100% accurate.

So, could AI steal my job? Not really. A scientist needs to be involved to validate AI-generated predictions and synthesise the molecules it suggests. I personally would love AI to help me to find a synthetic strategy towards a new compound; it basically works like an automated, super-fast literature search – without me clicking through the web for hours. It feels like those futuristic spaceship computer assistants from sci-fi movies. Those turn evil rather often, but again: Hollywood is a bad influence.

A worthy comparison, in my opinion, is the implementation of computers in science. Without programs like ChemDraw or Word I could barely survive today. I can hardly imagine how time-consuming and annoying it must have been to solve multiple pages of mathematical equations by hand. Evaluating crystallographic or NMR data without computers must have been nearly impossible, or at least unthinkably slow. However, we are not done yet. Computer automation is on the rise in all fields: flash chromatography and automated catalytic screenings, to name only a couple that use robotic approaches (incidentally, I have never seen a self-aware flash chromatograph trying to take over the world in a movie). In 20 years, scientists will view machine learning AI in the same way: a tool that will allow us to do our jobs faster, better and more easily than ever before. This is not only important from an economic perspective, but also ethically, as it is our obligation to society to provide advancements as quickly as we can. For this, we should use the best technological innovations available.

After Deep Blue was victorious, chess lost some of its magic at first. The computer’s success provided tangible mathematical proof of which moves were best, allowing players to abandon analysis and just memorise the top strategies. To counteract this, more and more players tried uncommon positions to put their opponent in uncharted territory, then catch them off guard. As a result, matches became much more attractive to watch.

I see a similar trend for chemistry: regular, tedious tasks like column chromatography or solvent screenings will be performed by computers automatically and AI can assist our decision-making. In return, we, the scientists, will be able to focus on checkmating new, unknown challenges.