The European Research Area is often sold as a boon to nations: the collective power of EU membership fuelling innovation. From funding mechanisms such as Horizon 2020 through to cross-country collaboration, the common narrative is that the 12 Eastern European countries that joined the EU in 2004 and 2007 have garnered a boost to their science output. The problem, according to a paper last month from Science Advances, is that this isn’t the case.1 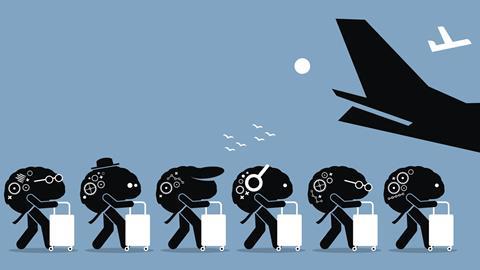 The paper, by the University of California’s Alexander Petersen and colleagues, looked at collaboration from academic papers around Europe from 1996 to 2012. Creating a predictive model, they found that cross-border collaboration would have been higher had the 12 entrants hadn’t joined. The reason for this seemingly paradoxical shift is, the researchers suggest, down to brain drain. While the newcomers benefit from the EU’s lack of red tape, the free movement of people means that the best researchers head off to the established academic climes of France, Germany and (Brexit excepted) the UK.

It’s not all bad, though. The paper’s authors emphasise that policies put in place through Horizon 2020 to counter specialisation of regions gets an uptick. The authors also point out that brain drain isn’t universally bad – it results in governments creating educational incentives within its own country that might not exist. And while this first generation of Eastern European academics may not return, it’ll be interesting to see how this relationship plays out in the long term: having a well-known Romanian researcher in, say, Paris, might encourage Romanian students to study there, only to return to their home country with all the benefits of their overseas experience (rather charmingly, the authors refer to this as ‘brain circulation’).

We have already seen the brain drain in other countries, most notably China and India, who have began to correct the problem aggressively with incentives to return. The EU’s situation is more nuanced (decisions are made for the benefit of the grouped member states, as well as individual countries), but there’s no reason similar levers couldn’t begin to appear. And, as always, Brexit is a wildcard: nobody knows what the future holds for British science. Petersen spectulates that ’while it may not be great for the UK … the prospects for labour mobility and competitiveness in the rest of Europe may become more egalitarian’.

Regardless of the future, the Petersen study emphasises that science is not equally doled out between countries. Funding, personnel and projects remain political beasts and, even within the EU, some countries will be winners, and others – particularly newer entrants – are going to lose out.