The fascinating in the familiar

A simple droplet shows that there are still plenty of puzzles to ponder in everyday observations, says Philip Ball 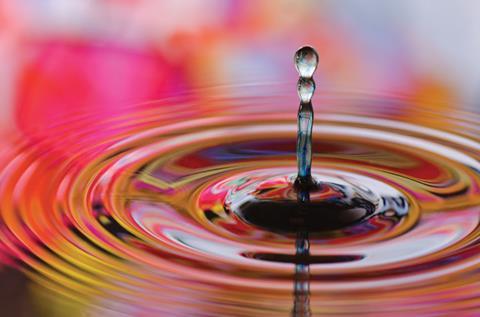 One of the joys, but also one of the challenges, of the liberation of curiosity in the 17th century – when it became permissible to ask any question about anything – is that the questions seem to have no end. By this, I don’t mean that explaining a phenomenon at one scale raises new questions at a smaller scale, as we move from visible matter to atoms and subatomic particles, and then to strings or quantum gravity. This happens, certainly, but we also find a proliferating richness of behaviour at the everyday scales where chemistry still has things to say.

One of the delights in the study of condensed matter over the past several decades is the re-emergence of problems that we can imagine vexing the likes of Faraday, Kelvin and Rayleigh – from light scattering in disordered media to self-organisation in granular materials or the spreading of coffee stains. Often these topics resurface because instrumental techniques permit studies at previously inaccessible scales of space and time. Equally, new conceptual tools might allow a problem to be framed in a theoretically tractable manner that was previously just ‘stuff that happens’. Physics, for example, can now say something about granular media, which were once assigned to the realm of engineers and tackled with little more than empirical rules of thumb. It’s surely also significant that such questions, while accessible with cheap benchtop experiments, are now recognised as having as much intellectual heft as those that confront high-energy physicists.

All this is true of a topic that combines great visual appeal with conceptual subtlety and practical importance: the behaviour of droplets, and in particular of droplet impacts. It is astonishing to think how little we know about a raindrop falling into a puddle or onto a windscreen. Inkjet printing has injected some urgency into this issue, but droplet interactions have also gained kudos from climate science, self-cleaning and superhydrophobic surfaces, and microfluidics.

The last of these has revitalised interest in the Leidenfrost effect: the skittering of droplets over a hot surface, levitated by the gas evaporating from their underside. There’s something rather wonderful in finding that the German physician Johann Leidenfrost’s observations in his alchemically slanted book A tract about some qualities of common water (1756) are not only topical, but still await a full explanation. The jittery animation of these suspended droplets still seems almost magical, especially when a modulation of the heat transfer from the surface by controlling its texture allows the drops to perform feats such as climbing uphill or negotiating mazes.1

But it’s those splashing drops that perhaps astonish most in their delicate geometries. It has been clear ever since Arthur Worthington first took high-speed photographs of droplets plunging into milk in the 1870s that this is a complex affair that breaks the circular symmetry of the system in interesting and rather beautiful ways. I suspect that Worthington, employed by the navy to understand impacts in fluids for mundane reasons, was seduced far from his brief by the wonder of it.2

This hidden order seems to exist beyond the range of even today’s cameras. But if numerical simulations are a good guide, it appears that the interface between the drop and the liquid into which it falls can become embellished into a glorious fractal-like train of microscopic vortices:3 a so-called von Kármán vortex street, like those seen at the planetary scale in the belts of gases encircling Jupiter.

Even the apparently straightforward question of why an impacting drop may or may not produce a ragged splash on a solid surface – an important matter for inkjet printing, dispersal of pesticides and other industrial processes – has only just been unravelled.4 Here, high-speed video shows what a complicated and many-factored issue this is. The fluid is ejected sideways in a thin radial sheet, but this only breaks up and spits out little secondary drops if its ‘flight’ above the surface is sustained by aerodynamic lift from the gas below. That criterion involves a concatenation of many parameters: the speed of impact, the liquid viscosity, gas pressure and so forth. Surprisingly, this mesoscale process, involving length scales from micrometres to millimetres, also depends on a molecular-scale parameter: the mean free path of molecules in the ambient gas. Here, then, is a familiar process that happens all over the place every day (not least in a British summer), and yet which can be comprehended only by reaching deep into the molecular physics involved.