At a party a few years back, instead of nametags the guests wore stickers that said 'hello, my URL is... 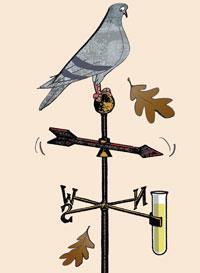 Several years ago, I was at a Christmas party for local bloggers. Instead of nametags, the guests wore stickers that said ’hello, my URL is...’. The party guests all had different backgrounds: there were food bloggers, knitting bloggers, photographers, writers and technology geeks. Halfway through the evening, one of the other attendees read my tag and said ’easternblot.net? You must be a biochemist!’

I registered the domain easternblot.net in 2002, and have been using the name online ever since. Many people have no clue what it means, but once in a while I run into someone who studied biochemistry and they all immediately get the joke: there is no such thing as an eastern blot.

A Southern blot is a technique to transfer (or ’blot’) DNA fragments that have been separated by gel electrophoresis onto a membrane, on which they can be identified. It’s named after its inventor, Edwin Southern from the University of Oxford, UK. DNA carries out its functions in the cell by being transcribed to RNA, which can then be translated into proteins. These three macromolecules are the building blocks of life. They go so well together that, with a wink to Southern’s name, the equivalent detection methods for RNA and proteins were named ’northern blot’ and ’western blot’, respectively. There are no other molecules in the DNA-RNA-protein triad, so the fourth compass point remains empty. At least, that’s what the textbooks tell you.

In 2007, Yukihiro Shoyama and a group at Kyushu University, Japan, claimed the name for a technique to study ginseng compounds, and more recently I found out that the detection of post-translational modifications of proteins (the addition of lipids, sugars, or other compounds after protein synthesis) has also been called an ’eastern blot’. That’s confusing, because another method for detecting lipids has been called ’far-eastern blotting’ since the 1990s, and a variation of this was termed ’eastern-western blotting’ by William Dowhan from the University of Texas in a 1996 paper. Eastern blot is also a name for western blotting in a different buffer system, a commercial product to detect proteins without antibodies, and various other methods. The phrase has now been attached to so many different things that it loses its meaning. How would you know which ’eastern blot’ someone meant?

Some biochemists humorously use the phrase to refer to a common lab accident, in which they switched the electrodes in the transfer step of a western blot experiment, sending the proteins away from the membrane instead of toward it. Eastern blot has become a running joke: a missing technique that we only feel we need because Ed Southern happens to have had a compass-related name. The inside joke nature of the phrase is why I use it as online name. But I’m not the only one: according to MySpace, easternblot is also a 33-year-old man in San Francisco, and I don’t think he’s the same person as the student who contacted me to try to sell me the domain name easternblot.com. There may be as many people using ’easternblot’ as a screen name as there are scientists using ’eastern blot’ to name their techniques. Most of the online easternblots are me, though, and as yet none of the biochemical techniques seem to have much of a monopoly on the name.

Easternblot.com is still for sale, and says: ’the eastern blot is a yet to be discovered technique for identifying biomolecules. When the next big technique is discovered it will be named the eastern blot!’ Well, easternblot.com, it’s already been done. Lipids, sugars, other compounds - detection methods for all of these, and more, have been called ’eastern blot’ for years, but none of them is catching on the way ’northern blot’ or ’western blot’ did. The name ’eastern blot’ is probably too synonymous with ’non-existent’ to ever be the next big thing.

I find it quite useful as online handle, though.