I thought about this, and said by the combustion of hydrogen-containing fuels, but immediately realised that this was only half an answer. How can you understand H2 + ? O2 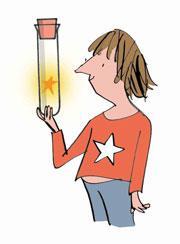 We started with the real basics. Back when the universe formed, I said, we only had hydrogen atoms (I lied), and drew a little circle. I said that there’s more hydrogen than anything else in the universe and that hydrogen atoms are actually friendly little things and like to go around in pairs. I then said that if you squish hydrogen molecules together you can turn them into liquid, but if you do this even more they fuse and become ’helium’. I said that hydrogen atoms weigh ’one’ (’one what?’ she asked. Good girl), but that helium atoms are number ’two’, weigh ’four’, and are very unfriendly.

And the incredible thing is that all these atoms were made in stars right back at the beginning of the Universe, billions of years ago. And when a star dies - ’That’s when the sun gets bigger than the solar system and then shrinks to nothing,’ she said.

Exactly. When a star dies, these new atoms are spread into space and form part of new stars, and planets, and you and me. We’re made from bits of old stars.

So what happens, I said, drawing butane, is if you have a molecule like this with carbons and hydrogens, and add an oxygen molecule - which is what happens when you burn things - then because oxygen is friendlier than most atoms, you break up the butane and get carbon dioxide (because oxygen is such a good friend with carbon there only needs to be two) and.water. H2O. And that’s how we make it.

I said that we can break water apart: if we stick an electric current through water it splits back into hydrogen and oxygen. Her little eyes lit up, but before she could ask if we might try it, I changed the subject.

I asked her if she knew what ’fission’ was. I drew a uranium atom. I explained about neutrons and chain reactions and atomic bombs and nuclear power, and what happened in 1945, and as powerful as fission is; fusion - how stars get hot, how all the atoms (the H and the O and the C and everything) that make you and me and the earth and everything in it get made - is even more powerful. Each time you fuse hydrogen, I said, you get much more energy than you do from splitting uranium.

’Oh,’ she said, nonchalantly, ’we’ve been told about fusion power. Why don’t we use it?’ and then I had to explain why she couldn’t come into the lab and try to fuse hydrogen or make liquid helium: except it was time for school and we were running late.