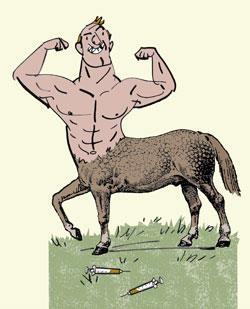 ’Science sells’ may not be as lucrative a clich? as its alliterative, sleazier relation, but it’s big business, nonetheless. Not a commercial break goes past without at least one optimistic advertising agency shoehorning the most questionable of scientific studies into their 30 seconds of air time. There are literally millions to be made, and the various manufacturers, vendors and truth-benders do not have to go through the rigmarole of peer review in order to manipulate our beloved subject to sell their products to the world.

Sex may sell, but it’s science which makes people beautiful, and not just through airbrushing. Chemists make the world a prettier place by manipulating elements into creams and ointments which guarantee age-defying effects. Cynicism not aside, the scientific evidence is always provided with the use of the advertiser’s other best friend: statistics. If you’re fast, and can read the sentence that’s flashed across the white background in white letters, in under a nanosecond, you will know that the latest anti-(insert natural process here) cream’s effectiveness was proved because ’18 out of 35 people tested agreed that the product made them look at least 3 days younger.’ Or as if they’d had a good night’s sleep, perhaps.

Creatine monohydrate is used extensively by athletes and body-builders, at all levels. There are many scientific studies citing its effectiveness, and I’ve no cause to doubt them (well, not all of them). Creatine, the product of the amino acids arginine, glycine and methionine, is produced naturally in the body, and found in foods such as fish and red meat. Athletes supplement their diets with approximately 5-10 grams per day.

When a muscle contracts, ATP (adenosine triphosphate) loses a phosphate molecule, releasing energy and resulting in the formation of ADP (adenosine diphosphate). Creatine, which the body converts to phosphocreatine, acts as a source of phosphate that can convert the ADP back to ATP. Therefore, having more phosphocreatine in the muscle means there’s more energy available for muscle contractions, giving the athlete the power of 10 tigers.

The big advertising fad at the moment is selling creatine at ’100 per cent purity.’ That’s all well and good until you take into consideration that: firstly, body-builders who obsess with not being muscular enough suffer from what is unimaginatively called bigorexia, or muscular dysmorphia. Some of these guys have been known to inject methionyl equine somatotropin into their bodies, which is horse growth hormone. If you’re willing to do that, then I can’t imagine that a 99 per cent specification is going to scare you away. Secondly, the 100 per cent purity is determined by - and they are clear that the potential customer knows this - HPLC. Wow. Letters. Which mean ...erm... absolutely nothing to Jonny Sixpack, or Joe Public for that matter.

A classic meaningless clich? from the sporting world is: ’you have to give it 110 per cent.’ Is it possible, that one day we will be able to buy creatine 110 per cent pure?