This year marks the 50th anniversary of C P Snow’s famous Rede Lecture entitled ’The Two Cultures and the Scientific Revolution’. His lecture, given at the University of Cambridge, UK, sought to define the heated issues surrounding the division between science and the arts, and to illustrate the impact of this divide on education and industry. The lecture outlined the ongoing battle between the ’literary intellectuals’ and ’natural scientists’ of the day. 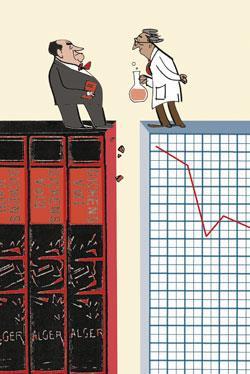 Born in 1905 into a lower middle class family, Snow excelled from an early age. He gained a first in chemistry from the University of Leicester and went on to study for a PhD in infrared spectroscopy at Cambridge’s Cavendish laboratory under Lord Rutherford. He seemed destined for a great career in research. But, at the age of 27, a retracted paper from Nature  on the synthesis of vitamin A propelled Snow into notoriety. The distress of the incident cut short his research career and he turned to fiction writing, publishing a string of successful novels and pursuing his interest in social commentary.

Snow had become disillusioned with what he referred to as ’literary intellectuals’, whom he saw as wielding undeserved power within government and enjoying unearned prestige in broader culture. Snow even blamed these ’intellectuals’ for the ongoing economic depression and the beginnings of the second world war. He attributed this imbalance in power to the antiquated 19th century view of science as a ’vocational, grubby activity not befitting the education of a gentleman’. Snow made it his life’s mission to displace the idea of the classically educated gentleman and allow for the new breed of scientist to enter into policy-making. Snow saw applied science and the industrial revolution as a basis for social hope to bring about the empowerment of the lower classes. He saw literary intellectuals as despising the utilitarian aura of applied science, yet still reaping its benefits.

Well, since Snow’s lecture, the cultural landscape across the globe has changed exponentially. The propagation of information in the modern world via the internet, television and print, means that once abstract ideas are now common property. In this respect, bridges are being formed and communication between all parts of society and culture has become easier. However, the lecture’s themes still resonate within contemporary science and the arts, and the question of whether the cultural gap is narrowing is still open to debate.

Snow talked of creating bilingualism, so that even if there was no shared body of knowledge, there might be intelligible exchanges of views. With ever-increasing specialisation in many sciences, it could be argued that science communication, even within the confines of a single subject, has become limited. We are no longer speaking in a common tongue, let alone disseminating our ideas and breakthroughs across more traditional cultural divides. Rather than moving towards a united culture, are we creating even smaller sub-sets which share no common ground?

If we are to pre-empt ill-informed backlashes against emerging sciences - such as stem cell research and genetic engineering - and also allow for public opinion on moral, ethical and safe practice to steer research, we must be careful to ensure that informed opinion based on fact is reported responsibly and in a way that is engaging and accessible to all.

So, as Snow suggested, are we scientists still skim-reading Dickens as a disingenuous touch of the cap towards traditional culture? Are ’literary intellectuals’ still laughing at us illiterate scientists, yet remaining ignorant of the second law of thermodynamics? Or have we moved on from this traditional cultural polarity to a more productive relationship between the arts and sciences? Well, I shall leave that for you - and the future - to decide.