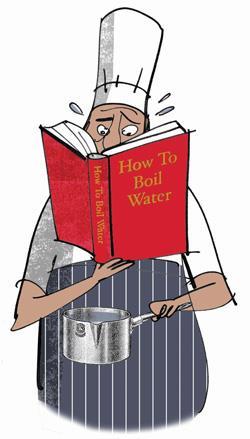 The boiling point of water is much more fluid than we’re led to believe. It can be pulled down as low as 97?C or as high as 109?C. As it turns out, there are a range of simple techniques, most not fully understood, which can seriously mess with the boiling point. For instance, if you heat water in a metallic vessel, it often struggles to hit 99?C whereas if you try heating water very slowly it can reach up to 104?C.

Superheating water became a craze in the 18th century and there were even claims of having heated water to 200?C without it boiling! In fact, in 1776 the Royal Society appointed a committee to decide on a boiling point of water. But rather than sorting the whole thing out, the committee simply recommended that the temperature of steam be measured instead, as it tended to be more stable (although not entirely).

But why care about the boiling point of water? Hasok Chang of the University of Cambridge, UK, who is responsible for much of this historical research, thinks it points to a problem with modern science: the tendancy towards extreme speciality. Modern chemists who spend all day investigating nickel phosphide nanoparticles or transition metal cyanides haven’t got the time, or indeed the inclination, to check over the basics. But, as Chang points out, ’the cutting edge is not all there is to science’.

What should we do about it then? Chang argues, and I agree, that we need to start funding what he calls ’complementary science’. That is, non-specialist research into the bits of science confined to history books. Was the concept of phlogiston really such a bad idea? Is the boiling point of water legitimate? What about the luminiferous aether?

Try not to cringe as you imagine an ’Historical Experiments Research Group’ right next to your pristine laboratory, working on these very problems. The aim isn’t to undermine modern science, but to help shed light on the gaps left behind by specialism.

In this vein, Chang took things into his own hands and actually repeated the 18th century superheating experiments in a modern lab. The result? You can see for yourself in the videos he recorded. As the water boils the thermometer slowly creeps somewhat eerily above 100?C. History, then, still has something to offer modern science.

So what next? Chang cites a 19th century experiment that sounds ripe for a modern makeover. In 1880 John Tyndall set up two concave metallic mirrors facing one another and separated by a few metres. At the focus of one mirror he placed a sensitive thermometer. At the focus of the other he placed a lit candle. On doing so the temperature on the thermometer increased. All well and good. We know about thermal radiation in the infrared spectrum.

The problem is that when Tyndall repeated the experiment with snow in place of the candle, Tyndall reported that the thermometer opposite measured a drop in temperature. This result seems to imply the existence of ’cold’ radiation. Cold as something positive, rather than the absence of heat. Could it be true? I scoffed at first, but then I was also pretty sure that water boiled at exactly 100?C. At the very least, I’m convinced by Chang of the need to go over the basics that our increasing specialism has left behind.