The physicist's guide to biology

How Erwin Schrödinger’s What is Life? overlooked the central science

There is symbolic irony in how Austrian physicist Erwin Schrödinger’s book What is Life? is hailed as a triumphant marriage of physics and biology. In the 1943 lectures on which the book was based – the 75th anniversary of which is being celebrated this year – argued that physicists might have something useful to say about the mysteries of life, which studies in genetics were at that time starting to elucidate.

The book, published in 1944, stimulated a cross-disciplinary dialogue that drew into biology such figures as Francis Crick and Maurice Wilkins, whose work led to the discovery of how genetic information is encoded in DNA. That’s all well and good. But this meeting of physics and biology already had another name: chemistry.

What is Life? is largely an exploration of what kind of chemistry is needed to sustain genetic inheritance across generations. Schrödinger’s answer was that ‘the most essential part of a living cell – the chromosome fibre’, then known to be the repository of genes, must be what he called ‘an aperiodic crystal’. He meant that it has an atomic structure that encodes a ‘code-script’ for the cell in a non-random arrangement of atoms that is stable and robust, yet lacks the regularity of a crystal. 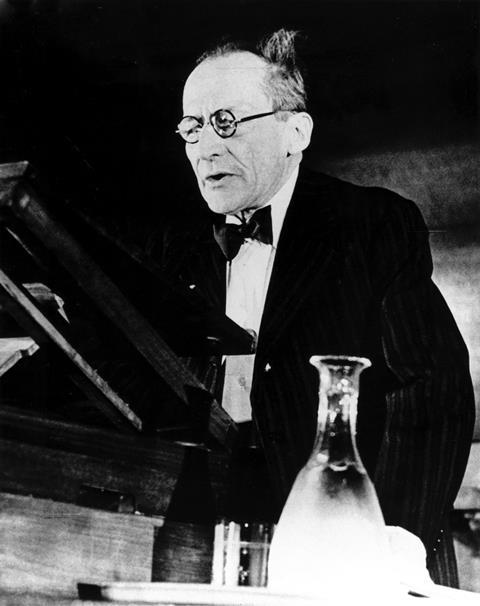 Erwin Schrödinger’s lectures in 1943 were later compiled to create What is Life? but by then the cat was out of the box.

You might wonder why he didn’t just use another familiar word for such a structure: a molecule. Schrödinger himself acknowledges as much. ‘Organic chemistry,’ he wrote, ‘in investigating more and more complicated molecules, has come very much nearer to that “aperiodic crystal” which, in my opinion, is the material carrier of life.’

Schrödinger goes on to ponder how this aperiodic crystal is able to remain stable against the disruptions of thermal motions and transmit traits across generations. A cynical reader might regard his efforts as a belated awakening to the quantum theory of chemical bonding and structure, which the likes of Linus Pauling had worked out in the preceding decade. Behold – chemical bonds can keep atoms in place! Molecules don’t isomerise or fall into entropic dissolution at the drop of a hat!

There’s a sense of such impatience in Pauling’s judgment of the book on the centenary of Schrödinger’s birth in 1987. ‘The real question about the nature of life, which Schrödinger failed to recognise,’ he wrote, ‘is the question as to how biological specificity is achieved.’ In other words, it’s no big deal that a molecular structure can encode a ‘code-script’ – but how is it actually enacted? Another pioneer of molecular structural biology, Max Perutz, was equally dismissive on that occasion. Why didn’t he just call his ‘aperiodic crystal’ a polymer, Perutz asked? Or talk about the fact, already known at the time of writing, that this mysterious agency of genes comes about by their encoding of enzymes? Both Pauling and Perutz criticise Schrödinger’s thermodynamics – he talks of the organism as harvesting ‘negative entropy’ from the environment – as simplistic and misleading.

There’s something in these complaints. You could almost get the impression from What is Life? that Schrödinger sees living cells as a baffling conspiracy of atomic organisation – as if a gas of particles were to assemble spontaneously into a Ferrari – without recognising the intermediate province of molecular structure that is chemistry’s domain. Schrödinger’s own intellectual heritage might account for this. Educated under Ludwig Boltzmann’s shadow in Vienna, he imbibed the language of statistical randomness at the molecular scale that seemed barely to accept molecules as well defined objects. Quantum indeterminacy only added to that hazy picture of the molecular world. To Perutz, this meant that What is Life? seemed to insist on unnecessary mystery.

Chemistry can cut through a great deal of the ballyhoo about physics meeting biology. Pauling was right to imply that Schrödinger’s speculations about ‘new physical laws’ being needed to explain life are less helpful than a calm and painstaking investigation of how specific molecules interact to engender the cell’s biochemical and metabolic pathways.

In retrospect, it would have delivered a powerfully apt message if Crick and James Watson’s 1962 Nobel for discovering the structure of DNA had been awarded in chemistry, not medicine. (There’s poetic consolation in the fact that Perutz himself got the chemistry Nobel that year, with John Kendrew, for their studies of enzyme structure.) It’s reassuring, then, that the conference to celebrate Schrödinger’s work, which was held at Trinity College Dublin on 5–6 September, included a talk by Nobel laureate Ben Feringa about the ‘future of chemistry’, as well as contributions from speakers – including another chemistry Nobel laureate, Ada Yonath, and Crispr pioneer Feng Zhang – that put molecules at their core.

And yet… there is a deeper resonance of What is Life? today. If life just becomes a dizzying succession of interactions between molecules, it vanishes into complexity. Some molecular biologists seem to want it that way. But Schrödinger hints that there must be overarching principles that sustain life as an out-of-equilibrium pocket of organisation. There is no reason to suppose these are unique: biology is not as exceptional as some biologists would have it.