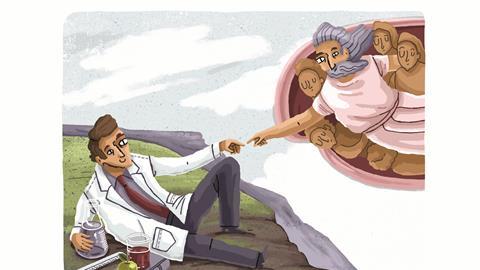 The three muses of scientific discovery

Inspiration, experimentation and happy accidents are all pathways to a breakthrough

How much of a great new idea is supposed to come from sheer inspiration? The related questions are how much should be coming from brute-force experimentation (these days generally machine-aided) and how much from sheer accident and coincidence? Those are, I would submit, three of the main sources for what looks, from a distance, like a single spring of knowledge. So when we triumphantly dip a cup into it, what’s the blend we’re drinking?

We can bring in some distinguished expert witnesses to speak to each point. For lone inspiration, we have Isaac Newton’s answer to a question about how he was able to come up with so many discoveries in mathematics and physics: ‘By thinking on them continually’. (Note: this is necessary, but not sufficient, to become the next Isaac Newton.)

For trial-by-error experimentation, there’s Thomas Edison’s remark about the perspiration-to-inspiration ratio of genius (99 to one was his estimate). And for being in the right place at the right time, I would cite Francis Crick on the discovery of the DNA structure: ‘It’s true that by blundering about we stumbled on gold, but the fact remains that we were looking for gold.’

The ability to pick the right area to look is not to be underestimated; it’s actually a high-level scientific function

Crick had a point there, as he often did. To quote one more distinguished witness, Louis Pasteur: ‘Fortune favours the prepared mind.’ Prize-winning discoveries have been wadded up and thrown into the trash or poured into the waste jar by people who didn’t realise what they were looking at. And that may be the most important ingredient of all: the ability to recognise something worthwhile when it does arrive. None of these methods (grabbing your head with both hands and staring at the ceiling, setting up hundreds of repetitive trials or blundering about) will prove efficacious otherwise. The ability to pick the right area to look is not to be underestimated; it’s actually a high-level scientific function. 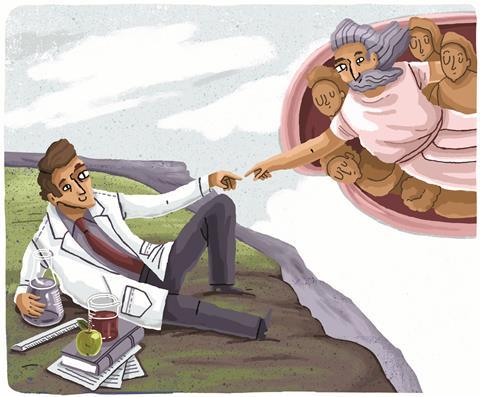 This is more important than ever before thanks to our increasing dependence on machines. This dependence has been increasing from at least the 17th century, but it’s been accelerated by advances in both the physical and intellectual sides of industry. Physically, automation and miniaturisation have made brute-force experimentation feasible in ways that would have made Edison completely lose consciousness. And intellectually, various data-mining and machine-learning approaches have allowed us to work with far more information than the human mind is capable of dealing with.

I believe we should celebrate this, but it’s not a view that’s shared universally. To pick one example, finding new chemical reactions by random experimentation, which is now feasible through automated reaction screening, is looked at by some as inelegant at best and somehow ‘cheating’ at worst. New reactions and new discoveries, they argue, should come through brainpower and inspiration and not through blundering about more rapidly than ever. But anyone in drug discovery who feels this way, frankly, should consider the intersection of that worldview with the realities of high-throughput screening. There is no greater display of experimental brute force. (As an aside, when I was first starting out in the drug industry a new room had been prepared for the hot new field of computer-aided drug design, with a ‘CADD’ sign on the door. The chemists across the hall responded with a sign of their own: BADD, for brain-aided drug design.)

Am I saying that flashes of insight and inspiration aren’t needed? Certainly not – they’re vital. But they are not sufficient, either. We have to be ready for happy accidents when they happen, and we have to be ready to let low-level experimentation show us the way when that’s appropriate, too. A romantic view of human capabilities is of little use against problems that we have no guarantee are even capable of being solved by humans. The Elizabethan scientist Francis Bacon called on science to achieve ‘the effecting of all things possible’, and we’ll need every tool in the chest to realise it. We should put down our pride and our preconceptions and get to work.