Throwing things over the fence 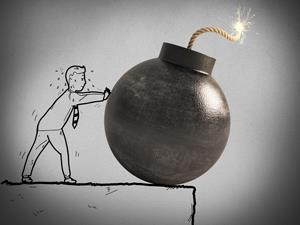 Listen to managers at a biopharma company, and you’re bound to hear mentions of ‘throwing things over the fence’. They won’t be made in approving tones – the phrase refers to the technique, whether deliberate or unconscious, of having the problems that have developed with a molecule be fixed by the next group that works on it. Those things are someone else’s job, not ours, you know.

These come in several varieties: the medicinal chemists may have a route to a key intermediate that just can’t be scaled up (too unreliable, too expensive, too hard to source the starting materials, too hard to purify etc). But that’s what the scale-up group and the process chemists are for, right? Or there may be a solubility problem: the drug itself may be easy to make, but is also a brick (which is pretty close to being a recognised term of the art). For the most part, compounds have to be tested by both oral and intravenous routes in order to really understand their dosing behaviour, and if the only thing the wonder-drug dissolves in is hot dimethyl sulfoxide, you’re going to have trouble with that. But fixing this is what a formulation team is for, right?

Well, maybe – but these groups (and others) generally have enough to do even without people casually tossing more problems at them. The big question is always whether these things could have been avoided if the people in the earlier stages had taken more care. The discovery med-chem team, for their part, might respond that they already had enough on their agenda just making a compound that was potent and selective enough.

When a problem comes flying over the wall, it’s impossible to know if anyone on the other side knew or cared

To be fair, the most egregious ‘Here, you fix it’ examples are probably not recent ones. Organisations are generally alert enough to know that there needs to be some sort of coordination between the different stages of development. But that leaves open the question of just how far you’d like to take this, because there is (as usual) an opposite error to be made. Ignoring the downstream difficulties is a mistake, but insisting that all of them be completely solved before a compound can advance is a blueprint for failure as well. A plan that calls for perfection is going to disappoint everyone, and it’s going to do so while looking superficially desirable and keeping everyone working ferociously hard, both of which can camouflage the trouble quite well.

There’s a saying among authors that the definition of a novel is ‘a substantial length of narrative fiction that has something wrong with it’. And a marketed drug will still have something wrong with it as well. Probably several things, all of which the project team would rather have been able to fix completely, but only managed to mitigate. Almost every compound could be improved, but the question is how much time and effort it might take to climb up the asymptote a little further. It can be very difficult to know when you’ve crossed over the line that separates ‘fixing a crucial show-stopper’ to ‘delaying the whole project in a futile search for perfection’.

So by all means, get the downstream groups involved, a bit, in the earlier stages of a drug project. Let them know that Drug Candidate #17 looks like it should have an easy path to a clinical formulation, but is going to be hard to scale up, while Drug Candidate #23, despite all efforts, is going to be a tough formulation, because all the structural changes that would make it easier seem to kill off its potency. When a problem just comes flying over the wall, it’s impossible to know if anyone back on the other side cared or even knew much about what would happen next. But this way, when it comes through the door and is handed off in person, people can have a better idea of what the biggest issues are in advance, and what tradeoffs were made just to get to that stage.