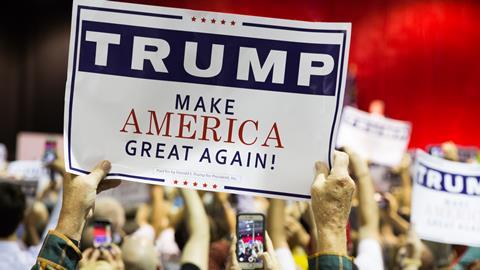 The US science community must reach out to Trump

It’s no secret that America’s research and science policy community almost unanimously backed Democrat Hillary Clinton to be the next US president, yet Republican Donald Trump won the race. So, the question is: what next?

Clinton was a known quantity – a vocal supporter of science who vowed to increase funding for science agencies. But Trump’s views on science remain something of an unknown. Although rarely discussing science or science policy during the campaign, Trump’s rhetoric was denounced as ‘anti-science’. This was a result of pronouncements that climate change is hoax, and his rejection of the scientific evidence that vaccines do not cause autism.

After his inauguration in January, Trump’s agenda will be aided by Congress, whose two chambers will both be under Republican control. This means that researchers and science policy wonks need to reach out to the Trump transition team and try to make their voices heard. It will be especially important to be heard on key science agencies appointments.

Many scientists and researchers are worried by the fact that Trump’s environmental policy transition team is headed by Myron Ebell, who chairs the Cooler Heads Coalition, which describes itself as ‘focused on dispelling the myths of global warming’. They fear Trump will appoint Ebell, or someone with similar views, to head up an organisation like the Environmental Protection Agency.

Also worrisome is Trump’s possible choice of director for the National Institutes of Health. He disparaged the well-respected biomedical research agency, describing it as ‘terrible’ without explanation during an interview on a conservative radio show in October 2015. Trump even appeared to agree with the request of the radio programme’s host, Michael Savage – who has a PhD in epidemiology and nutrition sciences – to lead the organisation.

The day after the election, the American Physical Society (APS) attempted to make contact with the incoming Trump administration, issuing a congratulatory statement that urged the president-elect to make ‘sustained and robust funding’ for research a top priority. But a swift and ferocious backlash from APS members, who argued that the statement appeared to endorse Trump, forced the organisation to retract the statement and apologise for ‘the offense it has caused’. APS later said it hadn’t been properly vetted.

This approach is misguided: now is not the time to disengage with Trump. Such a withdrawal could result in individuals with inadequate – or zero – scientific background being placed in key posts responsible for important policy decisions.

Despite their differences with Trump, researchers and science advocates must extend an olive branch. They are not a special interest group looking after their own welfare. All policies should be evidence-based.

The scientific community should reach out a hand to Trump, with the hope that he will accept it and the advice that comes with it. It’s time to build bridges, not walls.