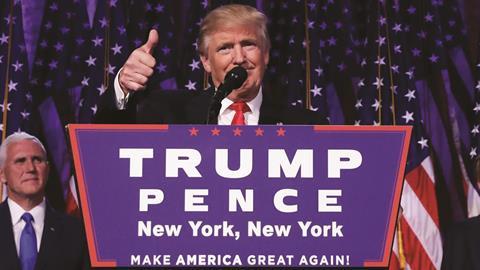 Research community fears a Trump presidency will harm US science, but the biotech and pharma industry are more upbeat

The election of Republican businessman and TV reality star Donald Trump as the US’s new president has prompted unease in the research community. However, industry seems to be embracing his 8 November victory, which may be beneficial for the biotechnology and pharmaceutical sector.

During the long presidential campaign, Democratic challenger Hillary Clinton advocated boosting the budgets of key US science agencies and automatically granting permanent residency to immigrants who earned master’s or PhD degrees in science, technology, engineering and mathematics fields. By contrast, observers said Trump offered little to no details on research funding or scientific issues. He also stands accused of having little respect for science, repeatedly dismissing the reality of climate change.

The Republican clean sweep of the White House and both chambers of Congress on election day worries many in the research community. ‘Unless President Trump considers science a particularly high priority, he is likely to leave the details to the Republican controlled congressional committees, which have negative views about certain fields of science and at least mixed support for peer review,’ remarks Neal Lane, a physicist who served as science adviser to former president Bill Clinton and previously as director of the National Science Foundation (NSF).

He adds that many of Trump’s plans will be ‘costly’, and Congress has ‘shown no interest’ in growing so-called non-defence discretionary spending, which is the pot of money from which US research agencies like the NSF draw their budgets. ‘I fear that research funding will get cut along with many other things,’ Lane tells Chemistry World. ‘It will be a huge challenge to the science community to make the case that research investments are very much in the national interest’.

Ben Corb, a spokesman for the American Society for Biochemistry and Molecular Biology, agrees that the new Trump administration will have an increased focus on fiscal policies that cut spending. He says that might not jibe well with bolstering funding for agencies like the NSF. ‘I don’t know what the stopgaps are going to be in Congress to stop going forward with some pretty dramatic cuts to domestic spending, and how that is going to play out,’ Corb adds. ‘I don’t know what Mr Trump’s scientific agenda would be.’

Michael Lubell, a spokesman for the American Physical Society, points out that Trump has vowed to increase defence spending substantially, while preserving social security and Medicare, reducing taxes across-the-board, and not raising the deficit. ‘There will be much less money available for non-defence discretionary spending, and that is where the bulk of support for scientific research resides,’ Lubell explains. ‘Therefore, I would expect to see a reduction in support for scientific research.’

It will be imperative for Congress to work on funding the government for fiscal year 2017 beyond the continuing resolution that is presently keeping agencies running at current levels, according to former congressman and physicist Rush Holt, who now serves as chief executive of the American Association for the Advancement of Science (AAAS). This will require the completion of bipartisan work already achieved in the two congressional chambers to develop and move along appropriations bills, he said.

Holt pointed out that the suite of bills already passed would increase federal research and development funding. The House of Representatives bill will up funding by roughly 2.1% over fiscal year 2016 levels, while the Senate one pushes it up 3.2% – slightly above the rate of inflation. A final compromise will be needed when the two bills are merged.

‘This real growth in federal investment in R&D is crucial fuel for the innovation engines that grow our economy, enhance our safety and security, and expand human knowledge,’ Holt said. He urged Congress to act swiftly to allow Trump to put in a budget request next year. Further delays, Holt warned, would hinder the scientific and technological innovation that helps to drive the US economy.

I do worry about what that will do for the national scientific workforce, which is really diverse

While Clinton’s advisers during the campaign included high profile researchers and science policy wonks, Trump’s did not. As he is far outside of the so-called ‘establishment’ there is no indication of who he might select to head the US’s research agencies. Trump’s potential science adviser remains a mystery too.

In addition, the research community is apprehensive about Trump’s stance on immigration, and fears that it might damage the nation’s scientific enterprise. The Republican nominee has proposed to suspend, at least temporarily, immigration from regions deemed to have a history of terrorism, like Iran and Pakistan.

‘The immigrations concerns are serious,’ says Corb. He points to anecdotal evidence that foreign born students at universities across the country have felt they were on the receiving end of more harassment during this election than previous ones. ‘I have had some of my members call me and say they have people in their labs that are concerned about what the future holds for them,’ he remarks. ‘Immigration discussions seem to have become more focused on how to limit numbers of immigrants here in this country – I do worry about what that will do for the national scientific workforce, which is really diverse.’

Others recount that many colleagues have threatened to leave the US, pointing out that Canada’s immigration website crashed – possibly due to being overloaded – after the election results came in. Although it remains to be seen whether these threats are empty words, some claim that the upheaval created by Trump’s election could reverse the ‘brain drain’ that sees the US drawing top scientists from the EU and Canada.

‘The immigration stance would be worrying,’ agrees Mark Wilson, who heads the chemistry department at the University of Durham in the UK. ‘In a similar way to Brexit, it is a major problem to UK scientists because we rely on easy movement of scientists and easy scientific exchanges.’

However, from a ‘purely selfish point of view’, Wilson suggests that Trump’s election could represent a boon for UK science. He notes that top US universities rely heavily on attracting the best students and researchers by bringing in talent from different countries.

‘There is a chance that we could benefit from the US having a much more aggressive immigration policy,’ Wilson remarks. However, he reiterates that any strict controls on immigration that limit the flow of scientific ideas or people will damage science in the long run.

Meanwhile, Trump has indicated that he wants to block the first ever US standards to limit carbon pollution from power plants, which President Obama established in August under his Clean Power Plan. In addition, Trump has indicated that he intends to pull out of the Paris climate change agreement, which came into force just days before the election. It sets a target to limit global temperature rises to ‘well below’ 2°C above pre-industrial levels.

When it comes to the chemical industry, questions remain over whether Trump’s repeated promises to gut the US Environmental Protection Agency could interfere with efforts to implement the newly reformed US chemicals law known as the Toxic Substances Control Act (TSCA). The National Association of Chemical Distributors (NACD) issued a statement encouraging Trump to continue the implementation of what it calls the ‘long-overdue’, bipartisan efforts to update the 40-year old TSCA. The Society of Chemical Manufacturers and Affiliates (Socma) also said it wants to see implementation of the modernised TSCA carried out in a ‘thoughtful and productive way’.

There is a sense of relief

By and large, the chemical sector appeared to welcome the change in leadership. ‘We look forward to working with the new administration, and President-elect Trump, to ensure policies are put in place that reduce the red tape on small businesses like chemical distributors enabling them to be the engines for growth, innovation and job creation,’ NACD stated.

Socma also said it wants to work with the new administration to ensure there is open and fair trade that levels the playing field, particularly for small and medium-sized chemical manufacturers who are competing globally. Further, the trade group said it aims to address with Trump barriers that impede the ability of US speciality chemical manufacturers from growing their businesses.

Meanwhile, Trump’s win appears to be good news for the US biotech and pharmaceutical industries. Tony Butler, an analyst at Guggenheim Securities in New York, recalls that the biotech sector had been hit hard, beginning about a year ago, when Clinton tweeted comments about excessive drug pricing.

Butler says Clinton’s tweet ‘sent investors scurrying for the hills’. He explains that they ‘wanted less and less to do with the healthcare space that generates pharmaceutical products’. With Trump in office, Butler says drug pricing is effectively pushed out of the political spotlight.

‘There is a sense of relief,’ Butler tells Chemistry World. ‘If you talk to the chief executives of major pharmaceutical companies, they all want anything with a free market component.’ The day after Trump’s election pharma and biotech stocks made significant gains, with the Nasdaq Biotechnology Index surging 9%.