Northwestern University’s Omar Farha, who hails from the West Bank, is all about MOFs and keeping America’s scientific community inclusive 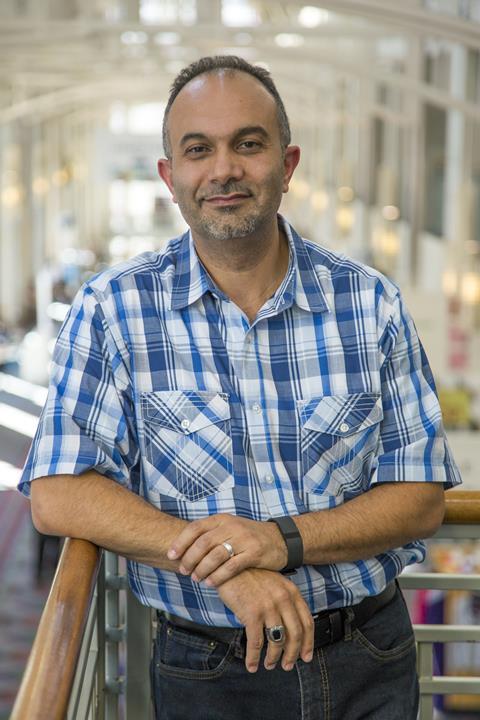 When he was growing up in the West Bank in Palestine, Omar Farha wanted to be a pilot, maybe even fly a fighter jet, but his second choice was a chemist. He came to the US right after high school, in the 1990s, and took off down that latter career path after earning his undergraduate and PhD degrees in chemistry in the US. Farha give the US a lot of the credit for his success, and wants to ensure that other immigrants have the same opportunities.

I would do anything for this country and I hope all of us here will vote and take this November very, very seriously

And last year, Farha received the RSC’s Early Career Award for his seminal contributions to developing MOFs for catalysis, storage and separation. He is currently a chemistry professor at Northwestern University in Illinois, US, and also the chief science officer and co-founder of NuMat Technologies, a start-up that develops MOFs for gas storage. NuMat has just developed what it considers to be the first MOF-based technology to be commercialised. Dubbed ION-X, the new product platform offers sub-atmospheric storage and delivery of hazardous gases for the electronics manufacturing industry.

‘I am really thankful that I chose to be a chemist and a scientist,’ Farha tells Chemistry World. ‘We are making materials, we are introducing new solutions to solve big problems’.

While earning his PhD at the University of California, Los Angeles, Farha says he became interested in the ability to ‘merge the organic and the inorganic’ to design useful compounds on demand that are unavailable in nature. ‘I started working on these materials in energy-related sectors, and it didn’t take long to figure out that some of those materials might be great catalysts for toxic agents,’ he explains. After receiving funding from the US Department of Defense eight years ago, Farha says he began working with colleagues on this area.

‘Nature gives us enzymes and proteins that require a specific environment, but under high temperature and harsh conditions they typically lose activity,’ Farha states. ‘We want to make a material to do what the enzymes do and be more rugged. I want to be inspired by nature to do what I want to do.’

Farha describes MOFs as ‘sponges made of chemicals’. MOFs have walls and holes, but instead of storing water like a sponge, they can store gases and chemicals. A MOF that is holding a gas can be ‘wrung out’ by pressure and temperature.

If you unfold the average MOF and lay it out flat, 1g of the material could cover an area the size of a soccer field, according to Farha. ‘You have such a huge amount of surface area in such a small volume: that’s what makes them tremendous materials to store and separate gases and chemicals,’ he explains.

Ultimately, Farha envisions a scenario where MOFs are designed in silico for specific applications and specific separations, and their properties will be able to be determined through computer modelling. ‘This is an exciting platform because it lets you design something before you go to the lab and make it,’ he says. That is very important from a financial perspective. ‘Now you don’t have to waste your grant money on just doing things randomly or doing things one by one,’ he notes.

Farha emphasises that the US’s success, especially its status as a global leader in innovation, is built upon the diverse and international nature of its scientific workforce. In any given year, there are up to 14 different countries represented in Farha’s group at Northwestern. He says these postdocs, graduate students and undergraduates hail from places like Asia, Europe, the Middle East and Australia. ‘We come from different backgrounds, train differently,’ Farha recalls. ‘Even though we have the same goal, most likely we approach solving the problem in a different manner – that becomes very crucial in a team dynamic.’

Opening his lecture at the ACS meeting, he stressed that the US is a scientific and technological powerhouse because of the global nature of its research community. Farha also got political on the upcoming US presidential election. ‘I would do anything for this country and I hope all of us here will vote and take this November very, very seriously,’ he said to significant applause from the audience.

‘This country is great because … the scientific community is very inclusive,’ he tells Chemistry World. ‘We get people from different backgrounds that think about solving very complex problems differently – I hope it will stay the same, regardless of who is the president in January.’ Republican presidential candidate Donald Trump’s remarks on restricting immigration and his attitude to science have caused consternation in the scientific community.

Farha adds: ‘Yes, I am a US citizen, and I will be voting in November.’