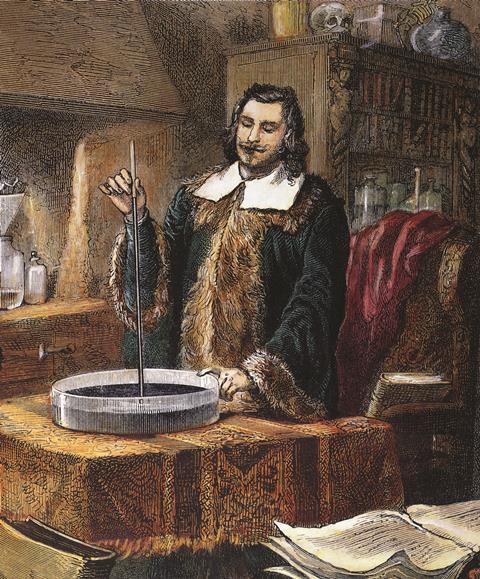 Galileo Galilei is a hero to many self-styled ‘sceptics’ of science, as his observations clashed with the church and saw him put on trial. Today, these sceptics argue, scientists are as guilty of a logical fallacy, the argumento ad verecundiam or appeal to authority, as the church. But there is another 17th century example of science questioning received wisdom that is often conveniently overlooked.

In 1630s Italy a puzzling question arose. Attempts to pump water from rivers and wells by suction failed when the column of water reached about 18 braccia (11m). Galileo incorrectly suggested that the limit was imposed by the weight of water: just as a rope would snap if subjected to too great a weight, so would water in a pipe if drawn too high. Mercury, being denser, would break at a lower level.

Around 1640, this idea was put to the test by Gasparo Berti. He set up a lead pipe 21 braccia high on the side of a palazzo in Rome, with a glass bell jar at the top and stopcocks at the top and bottom. Filled to the brim and sealed, the water plunged when the tap at the bottom was opened, leaving an empty space at the top. When the tap at the bottom was closed, air rushed in noisily as soon as the cock at the top was opened. Sounding showed the level of the water in the tube to be 18 braccia. Had the space at the top been empty? Was it a vacuum? The idea was shocking as it flew in the face of Aristotle’s assertion that vacuum was a logical impossibility – and seemed to impose a limitation on God’s omnipresence and omnipotence.

Berti died a few months after his experiment and into the discussion stepped Evangelista Torricelli.

Born in northern Italy, he read Galileo avidly while studying in Rome, and became a respected lens-maker and mathematician. Around 1643, he decided to study the vacuum and to ‘build an instrument to study the changes in the air’. It is likely that it was his friend Vincenzo Viviani, the elderly Galileo’s last assistant, who conducted the experiments under Torricelli’s guidance.

In a letter to another friend, Michelangelo Ricci, Torricelli described them. Several glass tubes of different diameters, sealed at one end, were filled with mercury. After placing a finger over the opening, they were upturned into a basin containing more mercury. When the mercury was released, its level in the tubes fell, stopping at a height of ‘one braccio, a quarter and a finger more’, leaving a seemingly empty space. Its emptiness was confirmed by pouring water into the basin. When the bottom of the tube was gently lifted to the level of the water, the mercury drained out, while the water ‘rushed in with horrible force’ until the tube was full. Torricelli concluded the weight of the mercury balanced the weight of the air pressing on the liquid in the bowl.

This conclusively refuted the ancient idea that air was weightless. Given that the atmosphere was estimated by observers of the sunset to be about 50 miles high, he estimated the density of air to be 1/400th that of water. We live, Torricelli observed, ‘nel fondo d’un pelago d’aria elementare’ (at the bottom of an ocean of air).

A week later, Ricci replied, noting that although the vacuum between atoms had been proposed by the Epicurean philosophers, modern theologians steered clear of the idea. He added that hoped that Torricelli was not ‘too disgusted by the bold opinions of the theologians, and their habit of bringing God into discussions of natural science, an area they should treat with greater respect’. Torricelli responded carefully to Ricci’s scientific objections, but discreetly sidestepped any mention of the church, adding that it would be easier if they spoke face to face. After that, Torricelli kept very quiet, perhaps to avoid getting into trouble with the Papal authorities. He died three years later.

But news of the experiment leaked out. It caused a huge commotion among scholars, including Marin Mersenne and Blaise Pascal in France, eventually leading to a ‘killer experiment’. Two identical barometers were set up in parallel at the base of a mountain in France, the Puy de Dôme. One was then carried to the summit. To the astonishment of the experimenters, the level of the mercury dropped steadily as the barometer was carried higher, confirming the progressive rarefaction of air in the atmosphere with altitude. The barometer could put numbers on the otherwise invisible atmosphere.

Torricelli’s barometer was one of the great revolutionary inventions that created far more science than it overturned. It uncovered the vacuum, the behaviour of gases and of the weather and much more besides. The next time a politician or pundit invokes Galileo to argue against scientific facts, perhaps it is worth paraphrasing an epic put-down from a past US vice-presidential debate: ‘Senator, you are no Galileo.’ Or Torricelli, for that matter.