What the market will bear?

By the time you read this, you may well be heartily sick of Martin Shkreli. His questionable drug development business model has hit the headlines recently, prompting a very public backlash. If you haven’t heard about it, be assured that it won’t take long for it to sicken you too. The plan is simple: buy up some obscure generic medication that’s vital for a handful of patients, close off its distribution chain under regulatory pretexts, and then raise its price by some multiple of ten.

That, literally, is all there is to it. Shkreli has applied this technique to more than one drug, and at more than one small company. The latest incident concerns Daraprim (pyrimethamine), a 60-year-old drug for toxoplasmosis. Shkreli’s startup, Turing Pharmaceuticals (whose name is also a source of irritation to many), raised the drug’s price by a factor of 50 overnight. Turing also made sure that no other generic company could obtain enough of its formulation to prove equivalence in a clinical trial, effectively closing off any competition in the US market. This loophole seems to have occurred to Shkreli during his career running an investment fund, appearing as an even more certain route to riches than his original job. 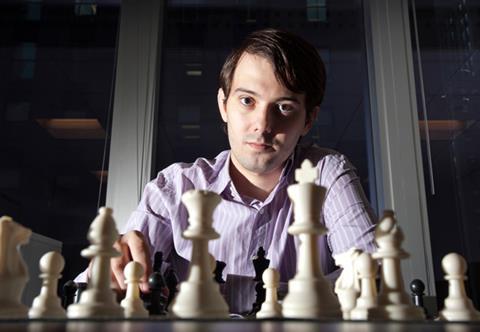 This sort of gamesmanship is so obnoxious that I actually have trouble organising my thoughts enough to say just how deeply it offends me. One particularly irritating feature is that it’s exactly the sort of behaviour that the drug industry’s most strident critics picture companies doing all the time. So to see someone flaunting this strategy and giving unrepentant interviews about how the price rise was completely legal and justified only confirms their views. Meanwhile, companies that actually take the risks of discovering and developing drugs can only seethe at being lumped in with the ones that take advantage of the rule book to engage in the most blatant sort of rent-seeking imaginable.

Yet, these companies have been slow to denounce the whole situation, quite possibly for fear of becoming involved in a larger conversation about drug pricing that they would rather avoid. Unfortunately, that conversation is already taking place, and if the R&D-driven companies aren’t there to participate in it, everyone else will be free to assume the worst (and will look to Turing as a fine example of it). There could indeed be consequences for speaking out, but at this point, the consequences of not speaking out have become worse.

The industry needs to clearly explain the difference between drugs under patent and generic drugs, and the Food and Drug Administration needs to take a new look at its own regulations to make sure that the latter market remains as open as it’s supposed to be.

Companies have been slow to denounce the situation, for fear of becoming involved in a conversation they would rather avoid

Members of the public tend to think that making drugs is like making cars or movies – the idea that a business can continue to operate while failing over nine out of 10 times to even get a product on the market is, perhaps understandably, strange to them. And they don’t differentiate much between the companies that are taking on those odds and dealing with patent expiries, versus the ones that manufacture older proven compounds that have gone off patent entirely. The latter are not supposed to even have enough pricing power to do what Turing has done, and the former should know better than to try it themselves.

There’s the conversation that people are trying to avoid, though. If some patented drugs are priced too high compared to the benefit they provide, the industry has to be ready for insurance companies and national health plans to push back (as they do). Patented drugs, in general, compete on utility, and generic ones compete on price. Shkreli’s business model, though, is not to have to compete at all. His company counts on insurance payers grimacing but paying up anyway in the case of such small markets, but this is not the way that a 60-year-old drug is supposed to be sold. Whether new ones should be sold quite that way is the question that the drug industry is dancing around, but the music is coming to a halt.