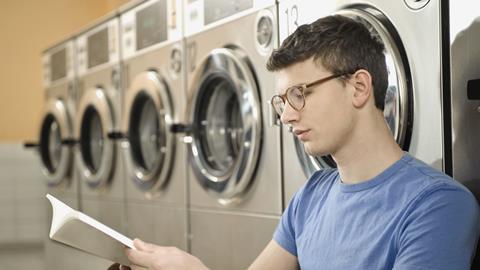 A shocking read in the launderette

What would a 1980s student make of modern nanoscience and macromolecular research?

I was trying, as one does, to stay current with the scientific literature the other day, when a list of abstracts made me realise something about chemistry the way it’s practised now, versus the sorts of papers I used to read when I first started keeping up with the field. That would be the mid-1980s, and back then I used to subscribe to the Journal of Organic Chemistry – around the time it switched to the dark blue covers – and read it in the launderette. That certainly kept the crowds away. Now, of course, I haven’t seen an actual physical copy of the journal in years, but I suppose that I could read one next to my own washing machine should an issue turn up.

The difference between the two eras shows up most markedly at the two ends of the molecular scale. There are far more papers concerned with nanochemistry, for one: surface chemistry followed down to the molecular level, the behaviour of individual atoms and molecules as they start to assemble together, the fine points of catalyst particles and their reactivity at vertices versus faces and so on. This is all at a granularity of detail that would mostly not have been possible 35 years ago, and from that perspective one has the sense of hidden worlds being uncovered. Very few of us who started research before the days of the atomic force microscope and its kin will ever forget our first glimpses of actual molecules sitting on a surface, looking for all the world like textbook pictures somehow transported off the page into the real world.

The other end, though, covers supramolecular chemistry – larger and larger structures investigated for their unusual physical and chemical properties and even their uses in molecular machines. What’s striking about these papers is that the compounds involved are not only huge by past standards, but that they’re well-characterised, and are likely synthesised in relatively pure form. It’s always been possible to fish some sort of gigantic molecule from an asphalt-like polymer mass, but determining exactly what it is and making it on demand are very different challenges.

Both of these represent extensions of our chemical abilities beyond the ‘safe zone’ of species with molecular weights up to the low hundreds. There are so many important molecules that fall into this range (drugs, catalysts, natural products etc) and their size is perfectly suited to the analytical methods that we’ve had with us for decades now. It’s only natural that almost all of those 35-year old papers would have worked in this range. Meanwhile, though, those instruments have become more powerful and capable of delivering specific information about ever-more-complex molecules. They make possible a widening circle of light in the huge darkness of chemical space.

What would I have made of such work, if I had been able to see it back then? If you’d revved up the time machine and transported a 2018 journal issue back into my 1984 laundry basket (making sure to work up a set of blue covers for it, of course), how long would it have taken me to notice that something strange had happened? To be sure, there are still papers published now that could have shown up back then, but their number is shrinking. It wouldn’t have been long – certainly well before the rinse cycle – before I encountered something that would have made me sit up in shock and puzzlement. Who were these people who could talk about metal clusters as if they could count the atoms in them? Who could run some sort of device over individual molecules and feel out their structures as if they were new words in Braille? Who could assemble structures so large that they began to look like what they actually were: machines and architecture?

And this makes a person wonder about what journal articles will look like in the 2050s. I already have enough ways to make a fool of myself without attempting to guess. And no, I will not attempt to predict the future of laundry, either. But I have little doubt that those articles will seem at least as oddly modern in comparison to today’s work as it is to the papers of the 1980s. Science really does march on, even if you can’t quite see it happening when you try to catch it by watching closely.