Making a mountain out of a molehill 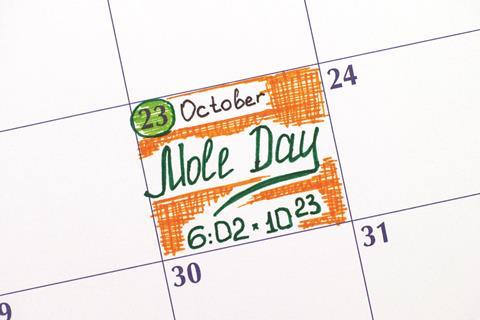 The mole is all set to be redefined. The International Union of Pure and Applied Chemistry (Iupac) has decreed that in future the unit no longer needs to be based upon the number of elemental entities in 12g of carbon-12 – a definition many of us had drilled into us at school. In a bid to uncouple the unit from another SI unit – the kilogram – the new definition relies on fixing Avogadro’s constant at precisely 6.02214076 × 1023mol−1. But it’s such a miniscule tweak, you might wonder why anyone aside from a few metrologists should care. In a nutshell, it’s because the mole is central to the story of chemistry.

The mole has a long and celebrated history. Its foundations were laid in the early 19th century with a great deal of work by some top names in chemistry, including Dalton, Berzelius and, of course, Avogadro. And it wasn’t always carbon-based: over the years, oxygen and hydrogen have also been used as the standardising substance at different points. It wasn’t until the latter half of the 20th century that the familiar definition based on carbon-12 was adopted. This shows that units like the mole aren’t set in stone, or carbon for that matter – they’re mutable and always evolving.

When people first meet the mole in school and learn how to calculate how many moles of a compound they’ve made, most would assume that the definition of a mole was fixed. The fact that it isn’t – that the textbooks are still being tweaked – is what makes it such a great story. The ins and outs of what a mole is might be esoteric – but that’s part of this story’s charm. It showcases chemistry as a living science, still changing and adapting.

The naysayers can, quite reasonably, point out that this change in the mole’s definition won’t make a jot of difference to how chemists go about their day-to-day work. The metrologists who have been working on this redefinition quite happily admit that we’re a long way from having instruments sensitive enough to work with the new figure. But that’s not the point. Striving to improve accuracy and be as precise as possible is key for science. The redefinition now awaits final approval at the end of the year – just in time for the international year of the periodic table – and perhaps this definition will hold for another 50 years or so. We await this next chapter in chemistry’s story with bated breath.