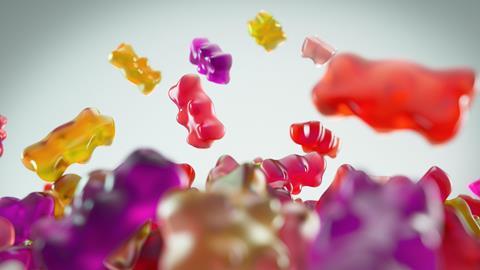 Why our choice of solvent matters more than we think

Imagine a jellybean in a jar of marbles. If we shake the jar, marbles jostle the jellybean, knocking it around the jar and squashing it. Often, condensed phase systems are thought of in similar terms: solute ‘jellybeans’ held in a sea of solvent ‘marbles’.

This simplification is reasonable if the solute and solvent do not strongly interact. Yet the solvent still has an influence – forming a cage around the solute, compressing its electron density. For dimer molecules, this actually shortens the average bond length and increases its vibrational frequency. Chemists have long known that interactions with the solvent can alter the dynamics and properties of the solute (the squishing and jostling of the jellybean, so to speak), For example, with Na2 in liquid argon the solvent fluctuations distort the solute electron density, leading to relatively large instantaneous dipole moments. This makes the otherwise completely symmetric solute infrared active.

But these effects are typically thought of in terms of an all-encompassing average. Knowledge of the local solvent environment at a given moment in time is not necessary; the ‘jellybean’ does not particularly care that it was surrounded by five marbles at one moment and six the next; it only cares about the marbles’ overall effects. We can simply declare it a jellybean in a jar of marbles and call it a day.

However, the simplification often breaks down because real solvents are not made of marbles – they are complex molecules with complex properties. That means they can interact with solute molecules, and that changes the whole picture – even when the interaction only about as strong as the hydrogen bonds present in liquid water. In this case, a more fitting analogy is a jellybean in a jar of gooey gummy bears: instead of simply compressing and squishing the jellybean, they also grab hold. This forces the jellybean to move according to the specific motions of its surroundings, which potentially pull, stretch, and contort the jellybean into new shapes.

This is the scenario explored using molecular dynamics simulations in our recent paper through the example of Na2 in liquid tetrahydrofuran (THF).1 Unlike liquid argon, polar THF is capable of interacting with Na2 with about the strength of the hydrogen bonding interactions in water. That causes the Na2 bond to stretch in liquid THF – the exact opposite of how it interacts with argon. The presence of the datively bound solvent also changes the electronic density of the Na2 bond, causing large distortions in its shape and inducing relatively large dipole moments in the molecule.

Perhaps the most interesting feature of this example is the reliance of these solute property distortions on the specific local environment. For Na2 in liquid Ar, average solvent effects were sufficient to understand the condensed phase system. For Na2 in liquid THF, however, average solvent effects alone do not explain the dynamics and properties of the Na2 solute: now, molecules are stablised in several unique states based on the number and arrangement of the THF molecules forming dative bonds.

While the interactions between the THF and Na2 would not be conventionally considered chemical bonds, these discrete states must surmount relatively large energy barriers – essentially undergoing a chemical reaction – to interconvert.

In this case, we cannot simply declare that we have a jellybean in a jar of gummy bears. Instead, we have several particular states of jellybean, each with unique properties that effectively behave as unique solute species. We must be ready to consider the presence of multiple stable solute states in equilibrium, or risk washing out the true solvent effects with a deceptive average.

But does any of this talk of jellybeans, marbles, and gummy bears really matter? After all, chemists already know that choosing the right solvent can stabilise products or change the reaction rate, for example. In short, yes it does: there are numerous cases where it is worth considering the solvent’s role in more detail. Many of the biological processes necessary for life, such as the folding of a protein into its biologically functional form, are controlled by delicate equilibria. The majority of chemical reactions, particularly those relevant to biological systems, take place in solution. In many of these scenarios, the solvent, far from a mere spectator, may play an integral role in the dynamics and even chemical identity of the solute. The same rules could apply on our lab benches too.

Choose your solvent with care; it may be sneakily integrating itself as part of the very chemical identity of the solute.