I recently had the chance to talk with an 85-year-old chemist, Don Batesky, who’s still doing bench work at the University of Rochester, US, after a long career at Kodak and working as a contract synthetic chemist. At one point I asked him what he thought the biggest change was in the sort of work he saw chemistry graduate students doing today. His immediate answer was ‘size’.

He meant reaction scale. This might be partly an artifact of his having worked in scale-up chemistry for much of his time at the bench, but his point was that the microscale work that’s more common today doesn’t give anyone much practice in manipulations such as distillation or crystallisation. When you work on only a few milligrams, though, things tend to be either oils of various viscosities or amorphous-looking solids, all of them more or less the same. Not so in larger quantities: just the varieties of crystal forms and behavior are enough to show that, even aside from their (considerable) aesthetic qualities. 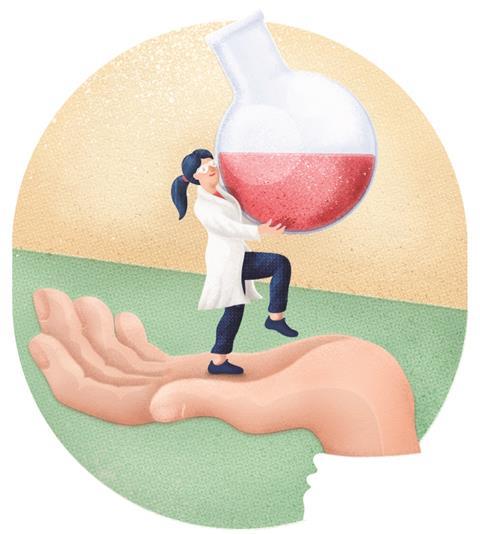 The ‘old school’ techniques are still valuable in teaching people how to handle compounds and how to interpret their bulk properties. I recently looked at a screening hit reported in the literature and said to a biologist colleague: ‘Well, the problem is that on one crystallographic axis this thing is going to pi-stack, and on the two others it looks like it can hydrogen-bond, so it’s probably going to have a huge melting point. If you had enough of it to grow crystals, you could probably make jewelry out of them.’ This was not the way my listener was used to thinking about molecules, as you might imagine, but I think it’s a chemist’s way. The foundations of that sort of thinking are laid by handling enough compounds in enough quantity to get a feel for how their structures influence their properties. (In case you’re wondering, my recommendation was that the solubility of the compound under discussion be checked immediately, with an eye to seeing whether it was aggregating in solution under the reported conditions and causing assay artifacts.)

I don’t want to take away from the more modern techniques of purification and characterisation. I well recall the days before walkup LC–MS instruments, just to pick one example, and I would not want to go back. One of the reasons that chemists ‘back in the day’ were so good at crystallisation was that they were forced to always work on a scale the machines could handle (what else was there?). Today, being able to analyse compounds with such small amounts of material is crucial for the kind of work that I do, because we deal with very large numbers of compounds that necessarily have to be synthesised on a relatively small scale. If all of these candidates had to be distilled or recrystallised, things would come to a shuddering halt.

That said, when a compound becomes more interesting and needs more work done on it, we get to the point where its physical properties become more apparent and can be worked with. As a compound goes on towards the clinic, it goes right back into the world that the Don Bateskys of the world recognise, because the scale-up labs would still rather crystallise a compound than subject it to column chromatography.

But clinical drug development is a long way from chemical education. Students (undergraduates and graduates alike) should use the microscale techniques that we have now. However, they should never lose the appreciation for working on that mesoscale that gives you enough compound to be easily seen and handled. Correlating compound properties with, for example, liquid chromotography retention time is fine, but nothing gives you a feel for a substance like seeing it dissolve and recrystallise (and finding the solvents that will do that well). It’s more expensive to do it that way in teaching labs, but in terms of experience gained it may be more expensive to leave it out. After all, not everything can be accomplished at the milligram scale – whether you’re in drug discovery, materials science or any other branch of chemistry, if you make something interesting, you’re going to want more of it.