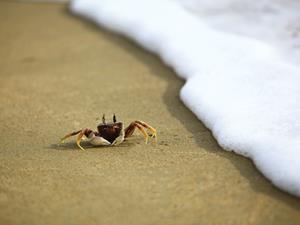 Foam is a common sight when seawater is agitated quickly

I was in Margate on a blustery day. The February wind was biting and the sea was whipped into a foam as solid-looking as that in a wash tub. This froth was blown in fragments across the sand, coating the foot of the cliffs in spume as if they had been freshly scrubbed with detergent.

It’s a familiar enough sight on the wintry beaches of northern Europe, but also puzzling. Fresh water doesn’t sustain a foamy head even when urgently agitated, and yet seawater seems capable of producing the sort of froth that normally demands a surfactant to lower the surface tension and maintain bubbles. It’s been surprisingly difficult to explain why this is so, and the answer is only now beginning to emerge.

A pinch of salt

Seawater doesn’t, in general, accumulate sufficient organic substances at its surface to act as a bubble-stabilising surfactant. The relative stability of its bubbles and froth comes instead from the dissolved salt. Yet at face value salt should have the opposite effect. This follows from the standard theory of colloidal stability – the Derjaguin–Landau–Verwey–Overbeek theory – which considers the various forces acting between colloidal particles (including bubbles).

The dispersion forces are attractive – but in ordinary water exposed to air, dissolved CO2 produces HCO3– ions that accumulate preferentially at the air–water interface. The electrostatic repulsion between the resulting negatively charged bubbles outweighs their attraction, and bubbles are slow to coalesce. However, dissolved salts screen out this charge and thereby promote bubble merging.1

On these grounds seawater ought to be less, not more, foamy than fresh water. Yet it has been known since 1929 that electrolytes may sometimes slow down bubble coalescence. What’s going on?

The difference is that bubbles approaching each other quickly – as they do in seawater whipped into a frenzy by the wind – behave quite differently from bubbles coming together at a leisurely pace. The crossover happens for approach speeds of around 10µm/s, and reflects a change in the mechanism of coalescence. Yael Katsir and Abraham Marmur at the Israel Institute of Technology have shown that for ‘quasi-static’ bubbles it all depends on the balance of surface forces described above.1 For faster, ‘dynamical’ coalescence, the barrier to bubble merging may be overcome by the kinetic energy of the bubbles themselves – much like how atomic nuclei may fuse into heavier elements when their kinetic energy exceeds the electrostatic repulsion between the positively charged nuclei. This difference explains why various experiments in bubble coalescence have given diverse and sometimes seemingly contradictory results; it all depends on the technique you’re using.

Why, in that case, does salt make bubble merging more difficult? Here it gets really complicated, although the answer clears up a question that nagged at me for the past two decades. In 1993, as an editor at Nature, I handled a curious paper from the renowned colloid-science group at the Australian National University in Canberra, which looked at the effects of salts on the rate of bubble coalescence.2 They found an odd dependence of coalescence rate on the type of salt, depending on the specific combination of anion and cation. Ions seemed to be of two types, which the researchers denoted a and ß; only aa and ßß-type electrolytes (like sodium chloride) slow down dynamical bubble coalescence; aß-type electrolytes (for example hydrochloric acid) do not. Thus the observations join a wide catalogue of ‘ion-specific’ effects on the stability of solutes and colloids, including the famous Hofmeister effect on protein solubility.

Katsir and Marmur have now offered an explanation.3 It all comes down to the degree to which the ions in question are segregated at the air–water interface: an effect long known to be ion-specific. As two bubbles are shoved together rapidly, a surface excess of ions gets pushed away laterally – and, depending on the surface concentrations, this can create a dynamical separation of positive and negative ions that might then induce electrostatic bubble repulsion. To complicate matters still more, the details depend on the geometry of the thin film of liquid separating the bubbles: whether it is largely flat, as in a foam of many bubbles, or significantly curved, as with two lone bubbles approaching one another. The upshot is that these influences can account for the ion-specificity of bubble stabilisation in agitated electrolyte solutions.

Marmur and colleagues have very recently verified that the same explanation holds for a jet of salty water squirted into a bath of the same solution, which mimics the process of breaking waves in a wind-battered sea. And it’s not just beach-strollers who should take note. Bubble formation and coalescence in wave-breaking is also central to the transfer of gases and particles between air and sea: the take-up of CO2, say, and the release of salt particles that might ultimately seed cloud formation. In other words, this is also a story about climate.