Antarctic ozone layer is on the mend

The Antarctic ozone layer is showing signs of healing, according to scientists from the US and UK. The finding marks a success for an international treaty set up to protect the ozone layer and phase out ozone-depleting chemicals. 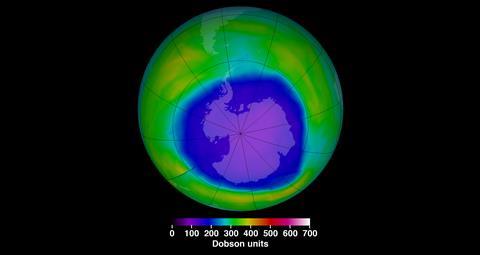 The Antarctic ozone layer goes through seasonal variations, with a hole opening up in September each year. In October 2015, scientists discovered this hole had reached a new record of 20 million km2.

Scientists first noticed in the 1980s that chlorofluorocarbons were contributing to the destruction of ozone. In 1987, world leaders drafted the Montreal Protocol to gradually phase out their production and reverse the damage wrought upon the ozone layer.

Now, Susan Solomon from the Massachusetts Institute of Technology, US, and her colleagues have found these efforts were not in vain. Using a series of weather balloons and focusing on ozone activity in September each year, the team calculated the hole has shrunk by around 4.5 million km2 over the last 15 years. The researchers also discovered the Antarctic ozone hole is opening more slowly each year.