A world from dust: how the periodic table shaped life 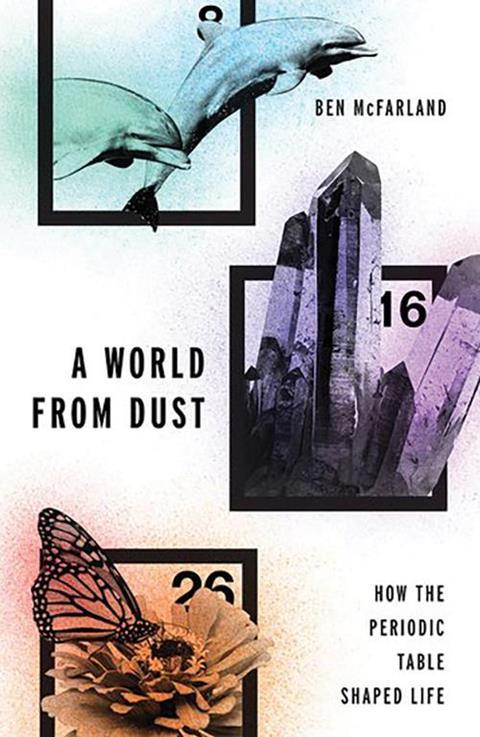 A world from dust brings together geology, chemistry and biology to explain the history of the world as we know it. The story of planet Earth – from its beginning as a dusty disc, to its present state covered in oceans, rivers, continents and living organisms – is described through the lens of basic chemical principles that have shaped the process.

Without doubt, the real star of the book is the periodic table. Ben McFarland refers to the table throughout, emphasising how the highly structured arrangement of the elements gives order to our universe.

The way in which individual elements are brought to life is fantastic. The elements required for rocks to form, or rivers to flow, or life to thrive are given personalities and histories of their own. McFarland also makes a great attempt to explain how fundamental properties such as electronegativity and atomic radius influence the types of functions that different elements have in our world. The story is packed with interesting anecdotes, analogies and light hearted quips. McFarland is not just recounting a tale, he is speaking to the reader. Unfortunately, these frequent asides often break up the flow of the narrative and at times can be exhausting. This is compounded further by a tendency to suddenly leap between different topics, with each chapter covering multiple themes.

The book itself is well produced, with beautiful hand drawn illustrations used to help describe some of the more difficult concepts. A number of figures and diagrams are also provided to explain certain topics, although occasionally these are found overleaf from the text that refers to them, which creates the slightly frustrating need to flick back and forth between pages.

While the book appears to be pitched at a wide audience, regardless of scientific background, certain sections will likely be less accessible for some readers. But for those with a deeper scientific knowledge, other parts of the book might well seem laboured and unnecessary. This adds to the slightly confused feel of a book that hasn’t quite gauged its audience.

The story told in A world from dust is a fascinating one and McFarland deserves credit for uniting several scientific fields in an imaginative way. However, taking in the creation of elements, formation of planets and the evolution of life, the subject matter covered is mind-blowingly vast, and this might well be the book’s undoing.