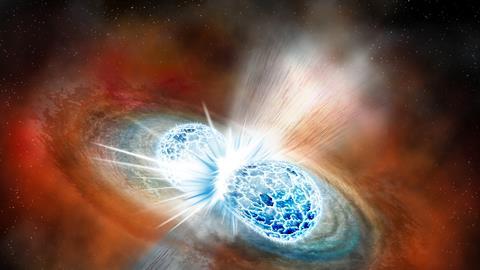 Source: Illustration by Robin Dienel courtesy of the Carnegie Institution for Science

When gravitational wave detectors started going off across Europe and the US in August, it was as if ‘a blazing neon sign saying “pay close attention”’ to one small spot in the sky had been lit up, according to astrophysicist Cole Miller of the University of Maryland, College Park, US. Within hours, astronomers had discovered a new and rapidly fading optical source later identified as the first neutron star merger ever observed. The electromagnetic radiation observed in the subsequent days and weeks has now provided new insights into how the universe’s heavy elements are made.

Atomic nuclei heavier than iron cannot be created in a star by nuclear fusion. Approximately half of the heavy nuclei found in the universe are thought to come from the rapid or r-process. The theory goes that floods of neutrons irradiate lighter elements to create neutron-rich, unstable nuclei that, before they can decay, take up further neutrons to build even more neutron-rich nuclei. These then undergo β-decay, in which neutrons turn into protons, to create stable, heavy nuclei.

An animation of the merger of two neuron stars. As the two bodies draw closer together, they circle each other hundreds of times each second until they eventually collide, producing a tremendous explosion and an expanding shell of debris. This detonation also produces gravitational waves, which travel outward at the speed of light. The collision also may create a black hold at the centre. Following the explosion, high-power jets of particles travelling nearly the speed of light quickly encounter the expanding debris, forming a cocoon of high velocity material, and then travel into interstellar space where they excite the dust and gas between the stars, producing an enduring radio ’glow’ that astronomers can study from Earth

Exactly how this happened though, has remained something of a mystery. Researchers had assumed that the only environment that could provide the required flood of neutrons would be supernovae. However, recent models have suggested mergers of two neutron stars or a neutron star and a black hole could produce some or all of the r-process nuclei. Various models of neutron star collisions have been created, but without any observations it has been hard to know which was right.

Models predict that, immediately after neutron stars merge, matter is thrown out into space at high speed. Protons and neutrons then come together within seconds and subsequently form atoms, but many of the nuclei produced are unstable, producing copious radioactive decay that keeps the mixture warm for weeks. This would explain the thermal glow of electromagnetic radiation from the binary merger detected on Earth.

The birth of the heavy hitters

In the days immediately following the merger’s detection, the strong electromagnetic signal peaked at visible wavelengths. This signal then faded quickly. Research groups all over the world agree that this matches models in which material with a moderate excess of neutrons over protons condenses into the lighter r-process elements. Stephen Smartt of Queens University Belfast and colleagues claim to have identified optical transitions from the light r-process elements caesium and tellurium in this early light.1 As this material is relatively transparent, photons escape to space quickly.

The peak in emissions subsequently shifted to infrared. This would be expected as the expanding material cooled, but several research groups have concluded that this infrared radiation – observed up to two weeks after the event – can only be explained by the production of heavier nuclei such as the lanthanides. As these atoms have complex electronic structures and numerous electronic transitions, they absorb photons far more readily. Radiation would, therefore, not escape until the material had become less dense and cooler – explaining the longer wavelength emission.

Daniel Kasen of the University of California, Berkeley, and colleagues also claim to have identified spectral lines associated with lanthanides like neodymium.2 ‘I think the definitive evidence is not just in the colours and the photometric evolution – the clearer evidence is in the infrared spectra,’ says team member Brian Metzger of Columbia University in New York, who predicted in 2014 that different parts of the ejected matter would contain different proportions of neutrons and thus synthesise different nuclei.3 Smartt is sceptical, however. ‘It’s not clear to us that there is a complete and unambiguous signal of heavy r-process elements in the later data,’ he says.

Miller, who was not involved in any of the recent crop of papers, agrees with Metzger. ‘By now, more data have been collected and, as time has gone on, there’s a rather definitive fading from blue to red that can only really be explained if you have a component that has heavier elements and higher opacity,’ he says.

All the researchers agree, however, that, regardless of which elements were synthesised in this merger, the origins of r-process elements are far from settled. ‘Right now, at the 90% credible level, there’s a factor of almost 20 uncertainty in the rate per volume of double neutron star mergers,’ says Miller. ‘In addition, we don’t know whether this single event is typical or some kind of outlier. This is a teaser.’ Smartt agrees. ‘When we’ve got a better estimate of the rates, we’ll be able to do the calculations carefully and say either that [neutron star mergers] create all the heavy elements or that they’re a contribution and there’s another channel such as supernovae that might produce them,’ he says.