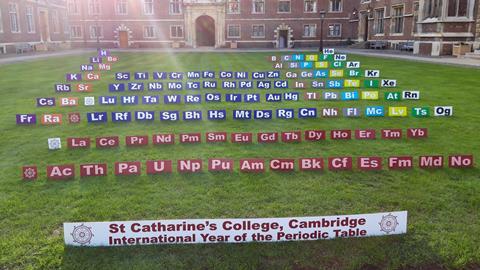 A glistering, shining spiral made of silver, gold, platinum, palladium and a diamond forms the show-stopping apex of the tribute from the University of Cambridge’s St Catharine’s college to the International Year of the Periodic Table. Commissioned to match George Schaltenbrand’s 1920 design for a helical gathering of the elements – albeit extended to all 118 current elements – and signed by Yuri Oganessian, it is almost certainly the most expensive periodic table in the world, and an easy reason for any element fan to make a pilgrimage to Cambridge. Yet for history lovers, the literal jewel in the exhibit’s crown is only one of the delights in store. 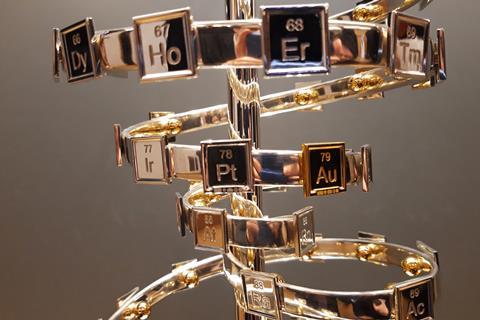 Curated by periodic table superfan Peter Wothers, the main body of the exhibition is a staggering collection of historic books that trace the creation of chemistry’s roadmap. This is an unprecedented record of the periodic table’s origins, from early alchemical texts through to original copies of Antoine Lavoisier’s 1789 Elementary Treatise of Chemistry ­– the first true list of elements – and notes on the discoveries of (among others) John Newlands, Julius Lothar Meyer through to Dmitri Mendeleev.

Taking up only a single room, the remainder of the exhibition is largely a collection of samples of elements – from borax powder to lead floats – and a selection of portraits of key element discoverers, including Marguerite Perey, Lise Meitner and Marie Curie. Far more likely to turn heads is the periodic table planted into the lawn of the college, ensuring science is writ large for the passing crowds.

Whether the public will be drawn in remains to be seen. The college is not one of Cambridge’s most visited, and the display could be easily missed. It also lacks interactivity, and the short bursts of information next to its artefacts do little to explain their importance to a layperson. But for fans interested in exploring scientific progress, this is a breathtaking treasure trove.