How to review a paper

2
The ethics of scientific publishing
Careers

The ethics of scientific publishing

Scientific publishing is a process that is based on trust and honesty, so it is perhaps unsurprising that sometimes things go wrong. Plagarism, fabrications and fake authors are all reasons a reviewer should remain vigilant. We asked experts to highlight some of the most common issues – and advice on what a reviewer should do if they encounter them. Our experts are Stuart Cantrill, chief editor at Nature Chemistry; Rob Eagling, editor-in-chief of Chem; Fiona Hutton, publisher at Cambridge University Press; and Robert Baker, assistant professor in inorganic and materials chemistry at Trinity College Dublin, Ireland and associate editor at RSC Advances.

Scientific publishing is a process that is based on trust and honesty, so it is perhaps unsurprising that sometimes things go wrong. Plagarism, fabrications and fake authors are all reasons a reviewer should remain vigilant. We asked experts to highlight some of the most common issues – and advice on what a reviewer should do if they encounter them.

‘There are quite a number of issues when you think about a scientific article,’ says Hutton. ‘There’s plagiarism, of course, [which is] picking up content from other articles and replicating it in the paper that you’ve submitted. And that’s of their own articles as well as plagiarism from other papers that are not from their own group.’ 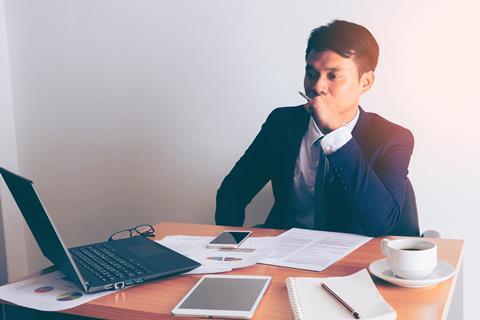 ’Hmm. Seems legit? No. No it doesn’t. I shall report this to the editor!’

Today plagiarism software allows publishers to scan submitted articles in order to cross check the text with those that have already been published. ‘We do this plagiarism check for every paper we know we’re going to publish,’ says Cantrill.

However, human intervention is still needed as software can point towards plagiarism where none exists – for example in the method or reference section. ‘You have to, as an editor, make a clear judgement between terminology that’s standard within the field and there’s no other way of saying it, or whether it’s just lifting directly passages out of previously published articles and placing them in new papers, which is not really acceptable,’ says Hutton.

Fabricated data is another issue. ‘This can be common but it’s quite difficult to spot. There’s now some tools to try and identify fabricated data but sometimes it’s down to the editor and the reviewer to try and spot that,’ says Hutton. ‘Then there’s changes in authorship throughout the course of the manuscript preparation. You need to establish who’s done what and when.’

Mostly there’s an associate editor overlooking a particular area [who] would make a decision about whether that was a biased review or not. So there’s checks and balances within the process to make sure situations like that don’t happen.’

Don’t use anything in the manuscript in your own work. It’s privileged information,’ says Cantrill. He acknowledges that many professors use peer review to train postdocs and grad students. However, if a paper is shared the editor should be informed beforehand, and you should never circulate a paper within your group or department. ‘That’s not appropriate.’

While some issues are being tackled with the help of technical solutions, can referees play a part in protecting scientific credibility?

‘Sometimes a referee will feel that they’ve seen that research somewhere before, so they often highlight it to the publisher or the editor in chief of the journal to say “I think this work has been conducted in this other paper, can you please investigate”,’ says Hutton. ‘Sometimes the reviewer’s mistaken and it’s similar but different work. But you need to investigate.’

These instances are less common that might be imagined. According to Hutton, in any journal in any given year she sees one or two instances of an issue that has to be investigated further.

But when issues do occur they can be serious, with severe repercussions, says Eagling. ‘Measures taken may include retraction of the article and other previous and future papers being more closely scrutinised, banned from publishing with certain publishers, funding being withheld, departmental investigations and so on. Most notably however it will severely tarnish your academic credibility from that point onward.’

How to review a paper