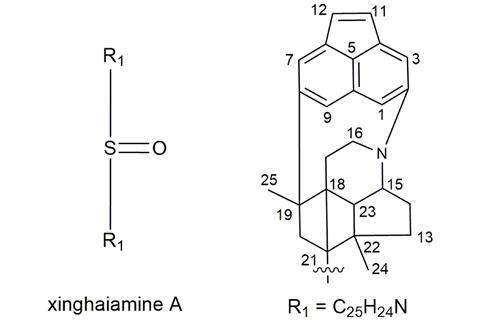 The proposed structure for xinghaiamine A raised eyebrows among chemists when it was highlighted. The paper has now been retracted

Three years after an unlikely structure first set off chemists’ alarm bells, a study describing a natural product with antibacterial properties has been retracted amid concerns over doctored images.

The paper, published in 2013 in the peer-reviewed open access journal PLoS One, was first picked up by chemistry blogger See Arr Oh in 2015. He was taken aback by the strange chemical structure Xinqing Zhao from Dalian University of Technology, China, and his team had proposed for the marine bacterial alkaloid xinghaiamine A. Among other unusual features, See Arr Oh spotted ‘a previously-unknown-to-science 4-4-5-6 ring system’. After trying – and failing – to assemble a molecular model, he wondered: ‘Can that really be correct?’

Commenters on Derek Lowe’s blog post about the unlikely structure then started digging deeper. Examining the NMR spectra, readers pointed out several problems that seemed to affect the 2D spectra in particular: some cross peaks showed up in different colours, others were surrounded by noise or had clipped edges. ‘No one competent could believe the paper’s structural assignment or vouch for the credibility of its authors,’ Lowe wrote.

Molecular model of the unusual R group of xinghaiamine A

Lowe and See Arr Oh contacted PLoS One, but the journal remained silent for three years. Now, however, PLoS One has issued a retraction ‘due to concerns about the chemical structure and spectral data reported in this article’.

According to the journal, the authors failed to provide their raw data and instead confirmed that the structure was incorrect. They requested the study be withdrawn. NMR spectra of different purification batches had been combined by accident, the authors claimed, which led to the incorrect structural assignment. However, ‘“Merging unrelated spectra” in this way is not actually a thing, though, to my knowledge,’ Lowe commented.

Since its publication in 2013, the study has been cited 15 times, most recently in a review covering antibacterial macromolecules.