The trials and tribulations of drug discovery

The many pitfalls medicinal chemists face when creating a new drug 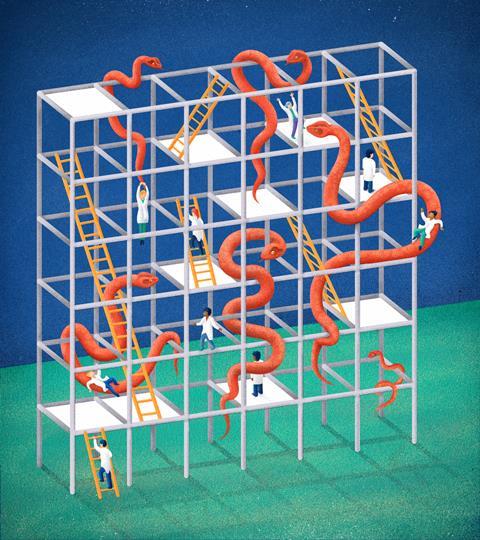 The path to a new drug is never straight and never well-marked. Many types of expertise are needed along the way, and every project has its own set of problems. But for small-molecule drugs, chemistry is always going to have a large influence, so here’s a guide to the process, with emphasis on the role(s) of the chemists involved.

Overall, you have to have an idea about what disease you’re aiming to treat, and the target you’re aiming to affect. Small startups are often quite definite about this; they’re often formed around some enabling technology that allows them (they hope) to have a new angle on a disease, or a new way to run assays that no one else can run.

A larger company, meanwhile, will be trying to balance its portfolio. It will look to make sure that all of the therapeutic areas it covers have prospective drugs moving towards the clinic; that its R&D organisation is making the most of the many opportunities for new therapies; and that certain diseases or mechanisms haven’t taken over too much of the pipeline – which could expose the company to even more risk than usual.

There are, broadly speaking, two ways to screen for new drugs: target-based and phenotypic. Target-based screening, as the name implies, aims at a particular protein or pathway that’s believed to be a key part of a disease state. Initial assays are often run in vitro against purified proteins (whose production by the molecular biologists is not always straightforward). Phenotypic screens, on the other hand, are run against cell cultures or whole organisms. These look for the desired biological effects, regardless of how they’re achieved. If an interesting ‘hit’ occurs during a phenotypic screen, usually the next step is ‘target ID’: a sometimes lengthy effort to find out just what led to the readout, and if it’s a useful avenue for research.

With either type of screening, you’re talking about looking at tens or hundreds of thousands of compounds, perhaps even into the low millions, in an effort to find hits that show the desired effects.

Curating such collections is a major chemical problem by itself: you want a diverse set of compounds, full of structures that you would be willing to start a project with. You also want to be sure that these compounds have been correctly identified and haven’t deteriorated over time. None of these criteria will be met without input (and vigilance!) from the medicinal and analytical chemists.

A high-throughput screen will yield a list of hits, which then have to be checked in several ways. A typical hit rate for such a screening campaign is well under 1% of the total number of compounds assayed – higher rates are often a sign that the screen is producing too many false positives, which can be very time-consuming to sort through. A library of 200,000 compounds, then, might produce several hundred ‘raw’ hits by the time the campaign finishes.

It’s a safe bet that not all of these hits are real. The key questions are whether the compounds are what they’re supposed to be, whether their results in the assay can be replicated and how potent they are. Once these have been established, it’s time to sort through the hits to see which ones are more desirable – a task often done by specific ‘hit-to-lead’ teams.

Here, the medicinal chemists look over the structures and make sure that there aren’t any troublesome features (structures that tend to cause false positives in the assays, or ones that have other biological activities that could cause side effects or toxicity later on). The team then clusters compounds into rough groups based on their structures.

At this point, new analogues of the compounds are synthesised for the first time, in an effort to see which seem to have a real SAR (structure–activity relationship).

All too often, almost any changes to a compound’s structure will wipe out its activity, and that’s generally a weak foundation for a drug project; it’s extremely rare for a compound to come out of a screen with everything it needs already built in, so you have to be sure that the compound can actually be improved through synthesis.

At this point you could go back to square one; some screens don’t even produce a prospective drug that makes it this far. It may seem odd to think of screening 1 million compounds just to find nothing useful, but it can (and does) happen.

The tractable compounds that are left are of real interest by this point, and at most companies this is when a full project team starts to take over. The hit-to-lead team, likely as not, moves on to the next screening effort, while more medicinal chemists are added to the project to join the various biologists who are needed to assay the new compounds.

These assays will not only include the primary assay used in the screening effort (or a refined version of it), but will also branch out to related targets that the project may need to avoid (counterscreens) as well as assays for known toxic mechanisms, such as some cardiac ion channels. As the potencies and selectivities of the compounds are improved, assays for pharmacokinetics and metabolic stability will be used to try to see how well the lead compounds will stand up to being dosed in a whole animal.

This process is called lead optimisation, and it’s a great deal of work. In a typical project, several hundred (or even a few thousand) completely new compounds will be synthesised, always with several competing optimisations in mind. Every part of a lead series’ structure is investigated to see what various changes might do to its activity profile.

This is rarely straightforward. For example, the structural changes that make a compound more potent can easily make it less metabolically stable, and changes that move the compound away from one undesired activity often send it right into another. These effects may or may not be additive as well: adding up all the beneficial changes to make a ‘greatest hits’ molecule fails as often as it succeeds.

In any event, this is where a medicinal chemist has to be imaginative and decisive, ready to try any reaction or route that might lead to a desired drug analogue.

This work leads straight to another chemical optimisation problem. When a clinical candidate is finally identified – a compound that meets the whole profile that the project team set out at the beginning – it will have to be produced in large quantities. Key toxicology assays are coming, where animals will be dosed for weeks at a time, and it’s very likely that more material will have to be produced than the medicinal chemistry team has ever had to hand.

This is where scale-up and process chemists come in. Their job is to produce key drug candidates in quantity, reproducibly and with defined purities – all at the lowest cost possible. It’s a completely different world than medicinal chemistry, where a 10mg yield is often enough. Once a compound is anointed as a clinical candidate, a scale-up group may well start off by making hundreds of grams. If the compound continues to progress down the pipeline, kilos may well be needed.

The original medicinal chemistry synthesis is almost always discarded by this time, as better routes are found. These large batches have to be produced under regulatory scrutiny, since eventually some of this material may be taken by humans in clinical trials.

At this point in a project, there’s yet another consideration: intellectual property rights. Patent applications are going to have to be filed on the compounds of interest, so your record-keeping and analytical characterisation had better have been organised along the way. It can also be the case that new compounds will need to be made to strengthen the patents, which can keep the medicinal chemists busy for a while longer.

By the time a compound enters the clinic, the bulk of the chemistry has been done on it. At this point, the big questions are finding a formulation suitable for human use, the stability and characterisation of the various forms and mixtures that will be used and, of course, whether the compound works in human trials at all. The failure rate at this stage, across the whole industry, is about 90%. If that sounds terrifying, you’ve understood the situation well.

Failures of pharmacokinetics and blood levels (Phase I trials) are relatively rare, since extrapolation to human doses can be done more accurately than ever.

Failures of efficacy in Phase II, though, are distressingly common. When this happens, it becomes clear that the entire rationale for the project has been in error: the target really isn’t suitable for treatment of the disease, and some of the assays that gave the team hope along the way might well have to be re-evaluated. In drug discovery, we are constantly reminded that we don’t know as much about human biology as we sometimes think we do.

Phase III failures can also come from poor efficacy, once a compound is tried in wider, more real-world conditions, or they can be due to the emergence of unexpected side effects under those same conditions. A failure deep in Phase III is, naturally, the most expensive and time-consuming of all.

Even when a compound makes it all the way through regulatory approval and to the market, the story isn’t necessarily over. No clinical trial can be large enough to predict everything that can happen when a compound is made available to millions of patients, so monitoring for adverse events is a never-ending process.

Step seven: starting all over again

By the time a compound is well into the clinic, the medicinal chemists on a project will have moved on to the next one (or the one after that). The entire process, from the idea for a new target to stocking the pharmacy shelves, rarely takes less than ten years (or even longer for slowly developing diseases).

Working on a project or compound that makes it all the way to the market, then, is a relatively rare event, and should be enjoyed as much as possible! This also means that medicinal chemists need to learn to take pride in their other accomplishments along the way: finding a good route into new analogues, fixing a troublesome metabolism problem, or threading through a toxicity assay. In the end, the success of a drug is not up to the chemists – but they have to make sure that it didn’t fail because of their efforts.