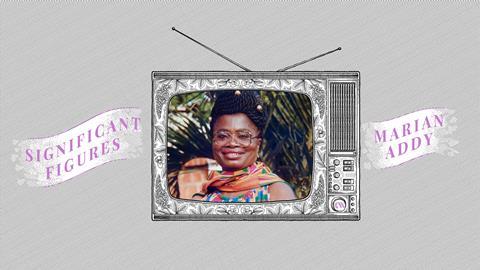 Marian Addy was the first female science professor in Ghana, who studied herbal medicine – and was a TV star

During the summer break, university student Marian Addy worked as a cashier at a fishmonger’s in Accra, the capital of Ghana. One day, a customer recognised her picture from the Sunday Mirror, a national newspaper. He couldn’t believe she was taking money for fish. The year was 1963 and Addy had just been awarded the California Prize for the University of Ghana’s best first-year chemistry student. She’d appeared on the front page of the paper.

‘We cannot be serious in Ghana,’ the man told her, incredulously. ‘In some other country, someone like you would be placed in a laboratory and challenged to work and come out with something worthwhile, instead of selling fish.’ It turns out the customer knew talent when he saw it; he would have been delighted to learn that Addy went on to become Ghana’s first female science professor. He might have recognised her face again as the TV personality who inspired young women across Ghana to pursue scientific careers. Meanwhile, Addy studied African herbal remedies, helping to usher in an era of more rigorous research on centuries-old traditional treatments.

Addy was no stranger to sales though, as she recounted in Rewards, her autobiography. During school holidays, she’d helped her mother Angelina bake bread, selling it on the streets of Kumasi with her brother. Born in 1942, Addy grew up ‘dada ba’ – from a relatively privileged family – but she was one of seven children and her railway mechanic father, Cole, worked hard to make sure his children had a good education. Cole was a stickler for tradition, and strict, calling his children from around the house with signals played on bells.

As the only female chemistry student, she initially got a lot of flak from her classmates

Aged seven, Addy stayed in Kumasi with her aunt to attend a government girls’ school, while the rest of her family moved to the capital, Accra. She’d walk barefoot to school with her cousins every day and return to her parents in the holidays, avoiding her father if she could.

Academically gifted, by the time she got to university she was already one of the country’s top students, the only girl to win a nationwide schools prize. She faced tough decisions about what to study. Her first love was chemistry but to take it as her main subject she needed a physics A-level. There had been no physics teacher at her secondary school – one of Ghana’s best – where there was also no running water and she’d had to go to a nearby stream every week to wash her clothes. Textbooks had been hard to come by too and her beloved biology teacher had done an admirable job to teach through practical experiment; lessons were spent scrabbling around the woods tracking seed dispersal.

After winning the California Prize in her first year, though, Addy was offered a place to study chemistry as her ‘special’ degree. But this would have meant an additional crash course in physics that would have upset her work–life balance. Addy had never had to study hard for her good grades, so she opted for botany instead, taking chemistry as a ‘general’ degree.

As the only female chemistry student, she initially got a lot of flak from her classmates. She and her lab partner once got mercury poisoning from their experiments, but only Addy had to stay in hospital overnight to give a morning urine sample – probably, she later realised, because her vomiting made doctors suspect she needed a pregnancy test. How many other times, she pondered, had her sex caused her to suffer needlessly?

Addy was a rare species: a woman studying science. Even as late as 2006, Ghanaian botanist Ebenezer Laing’s foreword to her book highlighted the lingering mistrust of such women: ‘Many people have entertained the view that ladies who become scientists or technologists are peculiar in some sense: perhaps strange characters who do not have the same range of interests as ordinary people.’ Far from being fixated with her studies, however, Addy filled the time vacated by her physics catch-up course with choral singing, dancing, captaining a tennis team and sewing dresses for herself and her friends.

By 1972, Addy had completed a PhD in biochemistry and was an assistant professor at Washington DC’s Howard University in the US. She later returned to the University of Ghana in Legon as a lecturer teaching biochemistry and led the Science Education Programme for Africa, devoted to reforming science education across the continent. Meanwhile, she continued with the line of research she’d been following in traditional medicines – establishing a firm scientific basis for herbal remedies. Here, the botany she’d grudgingly embraced came in handy.

In Ghana, 70% of people use herbal and other traditional medicines. African traditional medicine more generally relies on cultural knowledge, often passed down through generations without any scientific basis for its use. As a result, widely used herbal remedies are often viewed as inferior by the medical establishment, regardless of whether they work or not, and their safety can be poorly understood. ‘Professor Addy’s interest was to put [the] science into understanding claims made by herbalists regarding the efficacy of some plants in the treatment of disease,’ says Seth Gbewonyo, a biochemist at the University of Ghana and Addy’s first graduate student. It was for her depth of experience in traditional medicines that she took up the role of regional expert for the World Health Organization.

As a research scientist, she was perhaps best known for her work on Desmodium adscendens, a pretty flowering legume popular with African herbalists for making drinks to treat asthma and allergies. During the 1980s, she carried out a series of experiments with colleagues at Swedish and Canadian universities to establish a scientific basis for its use. In guinea pigs, they showed that extracts from the plant reduced the contractions of muscle and lung tissues that cause anaphylaxis. The work attracted the attentions of pharmaceutical company Merck, leading to the discovery of a new class of plant compounds called soyasaponins.

She also analysed herbal remedies for type 2 diabetes and high blood pressure, showing by example the importance of verifying these traditional medicines through animal models, extracting the active components, searching for biochemical mechanisms of action, carrying out toxicity testing and standardising formulations made from plant extracts. ‘[She] has done so much research to instil confidence in the use of medicinal plants as alternative remedies for treatment of many diseases,’ Gbewonyo says

At a time when female professors of science were a rarity in the developed world, Addy blazed a trail in Ghana

If there was one role for which Addy will be most remembered and loved, however, it was as the original host of Ghana’s National Science and Mathematics Quiz TV programme between 1994–2000. Addy’s tireless work in supporting young scientists and promoting science to the general public saw her become an icon for a generation. ‘I am so surprised that little kids, market women, policemen, everybody will wave at you or shout you down, when [you] go out,’ she once wrote in a magazine article. ‘This shows the popularity of the programme.’

For University of Ghana pharmacologist Thelma Ohene-Agyei, who now hosts the show herself, watching Addy on television was where her ‘lifelong love affair’ with science began. As a teenager, she remembers finishing all her chores early every Saturday morning so she could sit in front of the television waiting for the theme song for the quiz to start. ‘I would sit through every question, attempt to answer each one and listen carefully to the explanation Professor Addy would give,’ she says. She remembers Addy being beautifully dressed in Ghanaian attire, which she believes was ‘instrumental’ in dispelling the notion of science being foreign to Ghanaian culture. Aged 15, she was already in no doubt that she wanted to follow in the footsteps of her role model and says she has spoken to many scientists of a similar age who speak fondly of Addy and how she inspired their interest.

In 1997, at the height of her television career, Addy become Ghana’s first ever female professor of science, cementing her place in Ghanaian scientific history. Two years later, Unesco awarded her the Kalinga Prize for the Popularization of Science, the only time to date that it has been awarded to a Ghanaian, putting her in the company of greatness among (largely male) names including Arthur C. Clarke, David Attenborough and Dr Karl.

She died in 2014 and was buried in Saltpond, Ghana, near her mother’s family home. At a time when female professors of science were a rarity in the developed world, Addy blazed a trail in Ghana. She rigorously tested the traditional medicines popular in her country, collaborating with researchers and agencies internationally. Perhaps most importantly, she left a legacy of inspiring young people, especially girls, to follow her into science in Ghana.