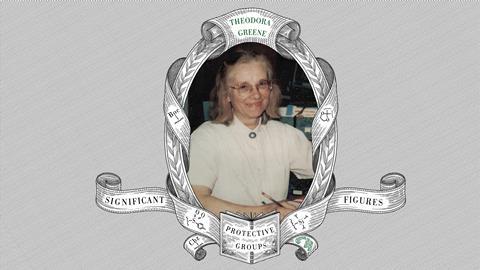 ‘When a friend gifts you a copy of this, you know it came from the heart,’ wrote chemistry PhD student Nicholas Cundy on Twitter as he proudly showed off his copy of Protective Groups in Organic Synthesis.

The book is a classic. In the discussion following Cundy’s tweet, chemists called it the ‘most useful book ever’, a ‘lab bible’ and a ‘go-to book’. Originally written in 1981 and now in its fifth edition, every synthetic chemist knows Protective Groups. Many keep a copy – often simply known as Greene’s – handy in their office or lab.

‘[Greene’s] is certainly a name that everybody knew in organic chemistry,’ comments Matthew Francis from the University of California Berkeley, US. ‘But I think no one knew much about [the author] as a person.’ Indeed, a number Twitter users replying to Cundy’s post expressed surprise that Protective Groups was written by a woman, Theodora Greene, at a time when female organic chemists were even rarer than today.

Greene started working on her PhD thesis – which would become the basis for her book – in 1975 at the age of 44, returning to research after more than two decades raising her family. As a PhD student at Harvard with E J Corey, Greene taught protecting group chemistry to the world’s first retrosynthesis computer program, and went on to write what would become the most comprehensive resource on protecting groups to this date.

Theodora Whatmough was born in Boston in 1931. At the age of eight, she fell in love with science experimenting with a chemistry set her parents had given her. In 1948, she launched into a chemistry career, first completing a bachelor’s at Radcliffe College and then a master’s degree at Harvard with Louis Fieser.

Looking back, I am astonished at what a huge project that was

In 1953, Greene married fellow chemist Frederick Greene. Their first child of four was born in the autumn of 1954. Greene had already started graduate work, but she decided her family life would be incompatible with the demands of her programme. She put research on hold to turn her full attention to growing a family.

When their youngest child entered middle school, Greene started thinking about job opportunities again. Although she had been away from research for 20 years, her interest in chemistry had never wavered. Luckily, chemistry was never far from home. ‘I was running a research group in the chemistry department at [the Massachusetts Institute of Technology] and I encouraged her to just come work in my lab,’ explains Frederick. 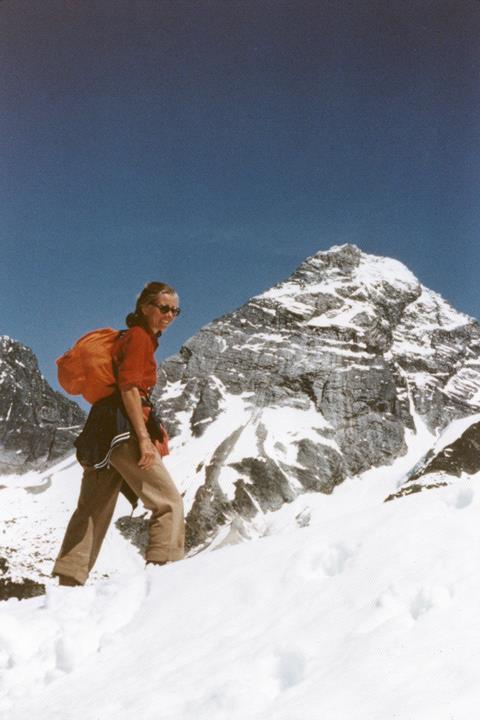 Greene immediately felt at home. ‘She was a good experimentalist and liked working in the lab,’ Frederick says. Despite having to catch up on two decades’ worth of scientific research, ‘her knowledge of chemistry was not anything other than if she had only taken one semester off’, says Dabney Dixon, a PhD student in Frederick’s lab at the time and now a professor at Georgia State University. ‘She took all these years off – and then there she is, back in the lab! I thought “This is an amazing woman.” I had such respect for her.’

Although research had progressed since Greene had last set foot into a lab, gender balance hadn’t. ‘Women didn’t do organic chemistry in my era,’ Dixon says. Although Dixon says she personally was always treated with respect, ‘I was the only woman in my class, in organic chemistry. But I really wasn’t because Theo was there. So unlike other women my age in chemistry, I never felt lonely in that way.’

Time in the library

While Greene enjoyed getting her hands on some synthesis problems, she couldn’t get the thought of earning a PhD out of her head. She reapplied to Harvard’s graduate programme and was accepted, this time under the supervision of renowned retrosynthesis researcher E J Corey.

Corey was leading a thriving research team that synthesised complex natural products, developed methodologies and created new reagents, and would win the Nobel prize in 1990. But Greene became part of another of Corey’s pioneering projects – using computers to help chemists plan synthesis routes.

With Lhasa (logic and heuristics applied to synthetic analysis), Corey had invented the first ever computer program for retrosynthesis. Lhasa contained the rules for more than 600 reactions, hand-written by chemists in over 30,000 lines of Fortran code. But what the program was missing was knowledge of protecting groups.

Chemists sometimes need to protect functional groups that would otherwise interfere with a reaction, stop it from working or mess with its chemoselectivity. Protecting groups had been around since the early days of organic synthesis; in her book, Greene cites an example from 1870. Over the decades, chemists had amassed a sizeable amount of knowledge and skill in handling protecting groups – something Corey now wanted Greene to compile in its entirety.

Although an avid experimentalist, Greene felt Corey’s suggestion of doing a PhD based on literature research would fit more easily into her schedule. ‘She had not done anything really in a way of writing before then, but she’d always liked books, so that’s what she launched into,’ says Frederick.

At a time when there were no online databases like Google Scholar or Reaxys, Greene spent hours in the library combing through the literature. Over five years, she meticulously catalogued and categorised every instance of protecting group chemistry she could find.

She also held brainstorming sessions with some of Corey’s lab team to discuss and compile what would become one of her book’s most recognisable features: the reactivity charts. ‘[They] give you a bird’s eye view for a particular protecting group and what it might be compatible with in terms of chemistry,’ explains Francis. The charts pit the most common protecting groups against more than 100 reagents, listing whether they are stable, moderately stable, labile or reactive. The lists were an exercise in chemical intuition, since many combinations had never been tried out experimentally. 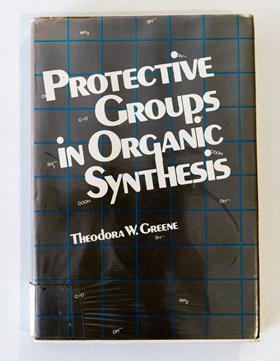 ‘Looking back, I am astonished at what a huge project that was,’ Frederick says. After five years, Greene finally received her doctorate, and published her work on teaching Lhasa protecting group chemistry.

But it was clear that the knowledge on protective groups Greene had amassed within her thesis would be of great value to chemists, far beyond its immediate application to Lhasa. With the help of her husband and a common friend, University of Delaware chemist James Moore, she started cutting down and editing the extensive thesis.

In 1981, Wiley published Protective Groups in Organic Synthesis. On 300 pages, it contained information on 500 protecting groups for alcohols, amines, thiols, carboxylic acids and carbonyls. ‘I thought “Theo, you did it! The rest of us are just running one experiment at a time, and you published a book,”’ says Dixon, who still keeps a signed copy on her shelf. ‘I was so proud of her.’

The book proved an immediate success. ‘It’s just so easy to find what you need,’ says Jenn Coggan, a chemist at the University of Waterloo in Canada. ‘You can tell it’s written by an organic chemist who knows how the mind works when you’re doing total synthesis. It’s still just as useful today as when it was when it was written.’

The book is not only treasured by organic chemists, but also by solid-state researchers working on DNA and peptide synthesis, or combinatorial library generation. ‘The ways that you attach molecules to solid supports, run those through a series of chemical reactions, and at the end do a very selective reaction to cleave that material from the polymer matrix, requires a really good understanding of protecting groups and reactions’ compatibility with those protecting groups,’ Francis explains.

Protecting groups are also used in nanotechnology, for instance when selectively functionalising nanocrystalline cellulose, Coggan adds. ‘I hope [Greene] was proud of the fact that she wrote a book with such a big impact, one that everyone uses.’

Since Protective Groups proved to be exceptionally popular, Wiley published a second edition in 1991. However, Greene had been hired by retired Polaroid founder Edwin Land in 1981, and was busy setting up and running a library at Land’s newly established scientific institute (now the Rowland Institute at Harvard). The update was therefore led by Pfizer chemist Peter Wuts, who added more than 200 new protecting groups and 1500 references. Nevertheless, Greene checked the entire manuscript as well as every single reference – a task Wuts called ‘herculean’.

Since chemists’ hunger for protecting groups seems insatiable, another update by Wuts was published in 1999. Although Greene retired in 1995 – turning her attention to volunteering at a local hospital – she again took on the arduous task of checking and rechecking the entire manuscript.

Throughout the updates, Greene’s famous reactivity charts remained untouched. Neither update tried to expand them, ‘because of the sheer magnitude of the task’, wrote Wuts.

Greene died in 2005, after a long battle with cancer. Her seminal book remains an invaluable reference work for practicing chemists, with two further editions published in 2007 and 2014. Wiley even released a Chinese translation in 2004.

Greene died in 2005, after a long battle with cancer. Her seminal book remains an invaluable reference work for practicing chemists, with four further editions published between 1991 and 2014 (all led by Pfizer chemist Peter Wuts). Wiley even released a Chinese translation in 2004.

Greene never talked about the book’s success – maybe the reason so few people know about her. ‘She was a very determined person but a very kind and “one doesn’t boast of one’s achievements” kind of person,’ says Dixon. ‘She just let those achievements stand for themselves.’

‘She just liked chemistry,’ says Frederick. ‘I think it was wonderful that somebody with such a lifelong interest in chemistry came out with something that is so useful to a lot of people.’

The Royal Society of Chemistry has published a report Re-thinking recognition: Science prizes for the modern world as part of a review into its prizes and awards portfolio