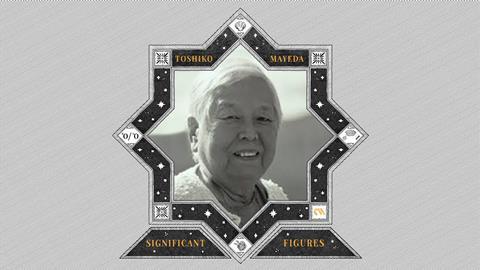 In 1946, a young Japanese-American woman named Toshiko Mayeda, along with her new husband, Harry, moved 2000 miles from Northern California to Chicago, Illinois. In the wake of world war two, the couple was seeking a new life together in a part of the country where neither had relatives. Having spent four years of the war imprisoned by their own government, they were ready for a fresh start.

The Tule Lake internment camp was one of 10 camps established in the US after the Japanese attack on the US naval base at Pearl Harbor on 7 December 1941. Mayeda was only 19 years old when the US government forcibly relocated her and her Japanese-born father, Matsusaburo Kuki. They were among the more than 100,000 US citizens of Japanese ancestry imprisoned in such facilities.

Mayeda was bright and determined, and had continued her studies as far as she could in the camp. In her new home in Chicago, a love of science drew her to chemistry, which she studied first at Wilbur Wright College before moving on to the University of Chicago. With only an undergraduate degree in chemistry, Mayeda nonetheless would go on to make a profound and lasting contribution to our chemical understanding of the Earth and the solar system.

Her chemistry degree qualified her to work as a laboratory assistant at the University of Chicago. She interviewed for a position in the lab of the Nobel prize-winning chemist, Harold Urey, and she was initially hired to wash glassware. But she soon graduated to more interesting work.

In the years after the war, Mayeda wasn’t the only one looking for a fresh start. Urey had spent the first part of his career at Columbia University in New York, where his research program focused on the physical and chemical properties of isotopes – work that won him the Nobel prize in 1934 for the discovery of a heavy isotope of hydrogen that he named deuterium. An expert in the fractionation and separation of isotopes, he had been a logical choice to head Columbia’s contributions to the US Manhattan Project to develop the first atomic bombs.

During the war, Urey had been responsible for heading up efforts to develop a method for concentrating the fissionable isotope of uranium. At the end of the war, he moved to the University of Chicago. It took Urey a while to get back to scientific work after he arrived in Chicago, participating in a public crusade to control nuclear weapons. He also found that his wartime work had sapped his enthusiasm for isotope separation. When he did at last initiate a new research programme, it was with an emphasis on the study of isotopes in nature.

When Mayeda arrived in Urey’s lab, she found a small group of researchers working to develop an ‘oxygen thermometer’. The work began with the observation that the natural process of calcium carbonate shell secretion in marine molluscs incorporates the stable isotopes of oxygen in ratios that are temperature dependent. When the temperature changes, so does the ratio. Determining the ratios of oxygen isotopes in marine fossils from dated strata could, Urey hoped, yield information about the prehistoric temperature record of the oceans.

The work Urey had in mind required mass spectrometers sensitive enough to measure the ratio of oxygen-16 and -18 with great precision. Such instruments were not available commercially, and so Urey had assembled a small team to build the instruments and develop methods of using them. A young electrical engineer, Charles McKinney, was put in charge of building the machines. McKinney had spent the war using and maintaining the mass spectrometers the Manhattan Project had built to monitor the uranium isotope separation process. McKinney built Urey a state-of-the-art mass spectrometry lab that could rival that of any lab in the world.

In one of the early papers, the researchers did not credit Mayeda as a co-author

Mayeda, confident that she could contribute more to the daily work of the lab, soon moved from cleaning glassware to mastering the mass spectrometry methods Urey and his small team had developed. The instruments, the first of which was completed less than a year before her arrival, were very large, taking up most of the laboratory, and their home-built quality required the operator to be intimately familiar with their eccentricities. Mayeda became the primary operator of these precise but finicky instruments.

Using control shells grown under known temperature conditions, the team painstakingly set and calibrated the temperatures of their oxygen thermometer. They developed methods to extract uncontaminated carbon dioxide gas samples from the calcium carbonate of fossil shells recovered from deep-sea cores. They fed these samples into the mass spectrometers and, with the results, determined the temperature variations of the Cretaceous and Pleistocene periods, tens of millions of years ago. In one of the early papers they published with their results, the researchers credited Mayeda not as a co-author or a contributor, but listed her in the acknowledgements as the person who had performed ‘a great deal of the laboratory work’.1 At other times, however, the researchers did list her as co-author.2

As members of Urey’s group moved on, the mass spectrometry work in his lab continued to take on new problems and new researchers, and Mayeda remained a principal contributor to the work. She never officially rose above the rank of laboratory assistant, nor did she pursue a PhD or a laboratory of her own. However, her contributions to the research undertaken in the lab did garner her the respect of her collaborators and a certain amount of autonomy. She continued to grow as a chemist, working with Urey and the students and postdocs who came through the lab. She ultimately became a mentor in her own right, helping to teach new arrivals the methods of mass spectrometry.

Mayeda’s work in the lab continued after Urey’s departure in 1958 for the University of California, San Diego. Cosmochemist Robert Clayton took over Urey’s lab and his mass spectrometers. Clayton had received his PhD from Caltech, where he had worked under one of Urey’s former post-docs. Hearing that Mayeda would be crucial to his research programme, Clayton convinced her to stay on and run the lab as his collaborator.

For a quarter of a century, oxygen from virtually every new type of meteorite passed through Clayton and Mayeda’s spectrometer

Clayton’s interests were drawn to the early history of the solar system, and what oxygen isotopes could reveal about this history. Mayeda and Clayton published extensively on oxygen isotope ratios in the solar system, studying every meteorite they could get their hands on, and analysed approximately 300 lunar samples, including soil returned by Nasa’s Apollo Program.3 In addition to oxygen-16 and -18, they began measuring oxygen-17 as well. Doing so, they were able to determine the temperatures at which these rocks had formed and discover that meteorites included oxygen that had predated the solar system – perhaps contributed by a supernova.4

In Clayton’s 2018 obituary, the UChicago News wrote that ‘For a quarter of a century, oxygen from virtually every new type of meteorite passed through that spectrometer as Clayton and Mayeda mapped out the isotope ratios for every class of meteorites.’ Together they developed the Clayton–Mayeda model of oxygen isotope abundances in the solar system.5 In 2002 she was awarded a medal from the Geochemical Society of Japan for her contributions to cosmochemistry.

Mayeda continued working with Clayton until her death in 2004. Her contributions to the fields of geochemistry and cosmochemistry were not unknown to the scientific community – her name appeared as co-author and collaborator beside many of the recognized pioneers of the field for 50 years. And yet she did not receive the public recognition or career advancement awarded to her colleagues. She remained the ‘indomitable’ research assistant that made the work possible.

Matthew Shindell is a space history curator at the Smithsonian’s National Air and Space Museum in Washington DC, US, and the author of The Life and Science of Harold C. Urey (University of Chicago Press, 2019) and a chapter on Mayeda in Women in Their Element (World Scientific, 2019) from which material in this article was taken