Higher than the sun

Sir Chris Llewellyn Smith, head of the UK fusion programme, would like to see viable fusion power a reality in his lifetime. To this end, he is strongly backing Iter, an international fusion project, as Katharine Sanderson finds out

Sir Chris Llewellyn Smith, head of the UK fusion programme, would like to see viable fusion power a reality in his lifetime. To this end, he is strongly backing Iter, an international fusion project, as Katharine Sanderson finds out

Nuclear fusion is big, it’s clever, and it’s going to save us from sweltering in our own carbon-stuffed atmosphere. Some would say that’s an optimistic view of a technology that has been ’just around the corner’ for 50 years, but Sir Chris Llewellyn Smith, who heads the UK’s fusion programme, is just the person to persuade sceptics to change their minds. 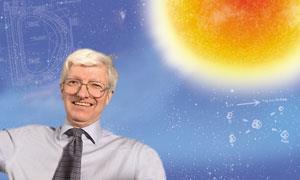 Since 2003, Llewellyn Smith has been director of the UK atomic energy authority’s (UKAEA’s) Culham division - a large, leafy science campus in the Oxfordshire countryside. Here he looks after the doughnut-shaped Joint European Torus (Jet), the largest experimental tokomak fusion reactor ever built. Jet has generated brief bursts of plasma that generate almost as much energy as they take in.

Jet is seen as the forerunner to Iter, an international project to build a working tokomak reactor that will actually deliver a positive power output. The go ahead for Iter was granted in June 2005, and building is due to begin in Cadarache, France, in 2008.

Llewellyn Smith has entered the fusion arena as a relative outsider. ’What I actually know about is the behaviour of matter on a scale of 10-18 metres,’ he says. His academic career began at Oxford University, UK, in the 1960s, just as theoretical high energy physics was getting exciting. His PhD supervisor Richard Dalitz was one of the first to show that protons and neutrons were made up of quarks. ’I was in at the birth of what is now known as the correct model of particles,’ Llewellyn Smith enthuses.

This area kept Llewellyn Smith’s interest for the next 30 years, leading him to the director general’s chair at Cern, the European organisation for nuclear research, which he occupied from 1994-1998. He was instrumental in the project to build the world’s largest particle accelerator, the Large Hadron Collider (LHC), which is due to open at Cern in November 2007.

Llewellyn Smith’s move from theoretical physicist to energy guru came at a troublesome time in his career. After leaving Cern he became provost and president of University College London (UCL) in 1999, but this was not a great success. Llewellyn Smith resigned after a number of arguments over his plans for the university, but is philosophical about his time there. ’I think I was doing quite a good job,’ he says, but adds: ’to do well at a job like that you really need to enjoy it.’

His foray into fusion is clearly more enjoyable. ’I was typical of most physicists back in the 60s,’ he says, ’I knew about fusion, but it looked incredibly difficult.’

Now Llewellyn Smith finds himself in the position of explaining fusion to others, and thinks that his newcomer status has given him a good grounding for the job. ’I understand what it is that people don’t understand,’ he says.

Fusion powers the Sun, so its energy credentials are assured. The theory behind the fusion of tritium and deuterium atoms - Jet’s fuel - has been around for decades. The tricky part is finding ways to confine incredibly hot plasma at temperatures sufficient to allow fusion reactions to happen (around 100 million ?C). There has been a lot of progress in this area, Llewellyn Smith says, and nuclear fusion experts are confident the problem is cracked.

The next step is to construct a power-station sized reactor that can work continuously. This poses big challenges for materials scientists. The walls are continuously bombarded by neutrons, and while magnetic fields hold the hot plasma in a vacuum, inevitably there are areas where the plasma touches the reactor sides. ’In Iter, down at the bottom where the really big heat loads are going to be, we’re talking about 10 MW of heat per square metre,’ says Lllewellyn Smith. 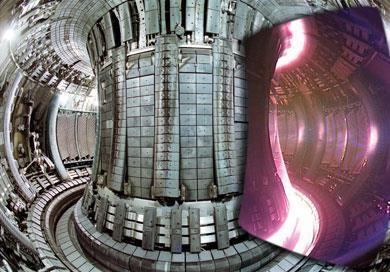 The Science Centre in Culham, UK is home to the Joint European Torus

Jet’s internal walls are lined with carbon composite tiles, similar to those found on the space shuttle’s wings. But the intense conditions can strip atoms from even the toughest materials, polluting the plasma. ’Carbon absorbs tritium in a big way - it moves around and it’s a bit of a problem,’ says Llewellyn Smith.

One option is to make most of Iter’s internal walls from beryllium, with carbon and tungsten tiles at the bottom of the reaction chamber where conditions are most severe. Whatever the solution, it will have to be a compromise, says Llewellyn Smith. ’If you have heavy metals it’s harder to blast them off the surface, so there’s less pollution getting into the plasma,’ he explains. ’However, if heavy metals do get into the plasma they can do more damage.’

This is because a heavy metal like tungsten has a tighter binding energy with its core electrons, so it won’t necessarily be fully ionised. ’If you have species of atoms in there that are not fully ionised, there are atomic transitions going on all the time and they’re radiating energy, which cools the core of the plasma.’ So while lighter beryllium atoms are more likely to enter the plasma, they are also less of an energy loss.This beryllium-tungsten combination has never been tested in a tokamak, so Jet will soon host an Iter-like wall inside the reactor, to see how it stands up to the punishing plasma.

Although the protective materials used in the walls will ultimately become very radioactive, ’the trick is to choose materials so the reactions don’t produced long lived waste,’ he says. Typical half-lives for the radioactive walls are 10 years, so that after 100 years the material is ready to be recycled.

The other materials challenge is in the superstructure holding Iter together. A ’big breakthrough’ in this area was the discovery that body centred cubic (bcc) ferritic steel will probably do the job nicely, says Llewellyn Smith, because it doesn’t swell under intense neutron irradiation like conventional steel. However, more exotic materials - such as silicon carbide - that can be used at much higher temperatures are desirable.

A special materials test facility is planned to be developed alongside Iter. This is the only way a realistic fusion power station will ever get built, Llewellyn Smith says. ’Iter is an experimental device - it’s not running round the clock. You run it for 20 minutes and then you scratch your head for two or three hours and try to find out what happened. Then you change the conditions and try again,’ he says. ’Iter itself will not provide key experimental data on the materials.’

The facility will have to mimic continuous reactor conditions, which has not been done before. ’The difficulty is there aren’t any other devices that produce the same fluxes of neutrons with the same sort of spectrum that you get in fusion,’ he says. ’You have to build a fusion power station - but you don’t want to do that until you’ve shown that you have the right materials, so it’s a chicken and egg problem,’ he adds.

The International Fusion Material Irradiating Facility (IFMIF) is building a materials testing facility.Two accelerating and very intense beams of deuterons will strike a liquid lithium target, which dissociates the deuterium to give, hopefully, a neutron flux and spectrum similar to that seen in fusion.

Operation testing of materials at IFMIF is not scheduled to start until about 2017. ’We need to persuade the world to hurry up with this materials testing facility,’ says Llewellyn Smith, who hopes that viable fusion power will become a reality in his lifetime. ’We also need to persuade the world fusion community to focus more on actually trying to build a power station.’

A commercial fusion power station is still a long way off, and although Jet is a vital stepping stone, it will have served its purpose soon. ’We won’t continue with Jet, it’s getting old. Iter will be a much better facility,’ Llewellyn Smith admits, ’but we can give Iter a flying start.’

That flying start could have happened 15 years ago, if the world’s governments had been willing to press ahead rapidly with fusion in the 1980s.

Iter could have been built in the UK if the UK government had shown more interest during the bidding process,’ he says. ’The UK government was rather negative about fusion,’ he says, ’there’s been a lot of time wasted deciding where to put the facilities.’ But Llewellyn Smith is encouraged by the current government’s position on fusion - which got a favourable mention in its recent energy review. He now wants to see investment in all possible solutions to the energy crisis, including renewables.

As he reaches retirement, Llewellyn Smith hopes to get much more involved in other energy issues. But a return to theoretical physics is not out of the question.

Llewellyn Smith is proud of the LHC at Cern, and thinks that the facility will allow some unanswered questions from the 1960s and 1970s to be addressed. ’Maybe when the LHC comes along there will be new results,’ he says, ’and I might go back. If I have the energy.’