Hydrogen gets on board

Cars that run on hydrogen still fail to compete in real terms with traditional petrol vehicles. Maciej Gutowski and Tom Autrey investigate the advances in hydrogen storage materials that could give fuel cell powered cars a strong future

Cars that run on hydrogen still fail to compete in real terms with traditional petrol vehicles. Maciej Gutowski and Tom Autrey investigate the advances in hydrogen storage materials that could give fuel cell powered cars a strong future

Last year, Honda proudly launched its new hydrogen powered fuel cell car - the FCX - which boasts a maximum speed of 93 mph and ’zero emissions’. The car, the second generation FCX, runs on compressed hydrogen and is Honda’s 26th fuel cell powered vehicle, built at a cost of around $1.5 million (?0.8 million). It is about the same size as a Honda Civic but weighs about 1000 lbs more and will only travel about 190 miles on a full tank. Many of the other automobile manufactures are also in the fuel cell building game; General Motors, US, is one of the most aggressive and has pledged to have a fuel cell car ready to go into mass production by 2010. Given the number of technological hurdles still to be overcome, this could be quite a challenge. 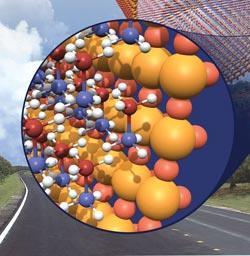 One of the biggest hurdles remains finding a material capable of storing enough on-board hydrogen for a vehicle to cover over 300 miles on a full tank without adding significant weight or volume relative to a petrol car. Specifically, 5-13 kg H2 is required to propel a highly fuel efficient automobile for 300 miles and must fit into a space comparable to a conventional petrol tank.

Because of volumetric constraints the hydrogen must be stored as a solid or liquid, either by physisorption to high surface area materials or by chemical bonding (covalent or ionic) to lightweight elements. Hydrogen stored on high surface area materials is weakly bound and generally requires low temperatures to stabilise it. Meanwhile, hydrogen covalently bound to light metals requires high temperatures to release it.

If one conservatively assumes that a vehicle’s physical system - everything needed to deliver hydrogen to the fuel cell: tanks, heaters, chillers, pumps, tubes and hoses - weighs about one third to half the weight of the storage material then the target material should approach a minimum of 12 weight per cent of hydrogen. This implies that the elements that make up materials for on-board hydrogen storage can only come from the first two rows of the periodic table. However, small amounts of higher weight elements could be tolerated at low concentrations for catalytic purposes.

Unfortunately neither highly compressed hydrogen gas nor liquefied hydrogen is likely to be capable of sufficient volumetric density to meet the mileage target. The limitation is due to simple physics, specifically the very weak intermolecular interactions between hydrogen molecules. H2’s small quadrupole and low polarisability do not provide significant binding through electrostatic, induction or dispersion interactions. Consequently, the van der Waals forces between two hydrogen molecules are negligible compared with the strength of a hydrogen bond or a chemical bond. Because of the weak intermolecular interactions, the volumes of both compressed H2(40 g l-1at 700 bar) and liquid H2(70 g l-1at 20K) fall far short of the automotive industry’s volumetric target.

One way to overcome the volumetric density challenge is to engage hydrogen in chemical or strong physical interactions with other elements: chemical hydrogen storage. This covers a broad range of materials but is defined as a process whereby the hydrogen is released by a chemical reaction which is induced by hydrolysis or thermolysis. The spent material can then be reprocessed or regenerated off-board. There is an additional constraint in this approach: the elements that interact with hydrogen have to be light because the resulting material needs to meet the hydrogen gravimetric density targets.

The hydrogen also needs to be released at relatively low temperatures, between ambient and 350K, to use the waste heat generated by the fuel cell. Add to these requirements the economics of regenerating the spent material and you get an idea of what the hydrogen storage challenge is all about. Scientifically, these challenges boil down to controlling the thermodynamics and kinetics of chemical transformations related to the release and uptake of hydrogen from materials that meet gravimetric, volumetric, and economic targets.

When facing such a challenge it is natural to adopt a ’materials by design’ approach based on state-of-the-art theoretical and experimental methods. Theory and computations provide critical insights when designing new hydrogen-rich materials. They predict the structures of new compounds and provide information about approximate thermodynamics and kinetics for elementary steps of hydrogen release and uptake. The calculated spectroscopic characteristics help to interpret experimental results. The synergistic interplay between theory and experiment has benefited the field and may serve as a model for future challenges.

Recent efforts have focused on materials with a higher volumetric density than compressed H2, a higher gravimetric density than titanium-doped sodium alanate - which is widely used in hydrogen storage research - and a lower regeneration cost than systems based on hydrolysis of metal hydrides such as sodium borohydride. Novel materials, such as metal organic frameworks and clathrates are also being considered.

Liquid hydrogen storage materials have the potential advantage of being able to use the existing pipeline transport infrastructure. Researchers at Air Products, a US-based gas company, have been using computational chemistry approaches to identify liquid phase hydrogen-rich materials that have the optimal thermodynamics for reversible hydrogen storage. 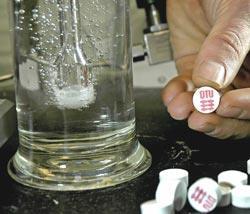 Using their computational screening approach they identified heteroatom substituted aromatic compounds as potential candidates. One of the materials that shows promise is N-ethylcarbazole. This takes up and releases hydrogen at significantly lower temperatures than conventional hydrocarbon sources.

Ammonia is another potential chemical storage medium and has the advantage, in comparison with hydrocarbons, that the thermodynamics of hydrogen release are more favourable - less endothermic - and there is no onboard CO2 emission. However, ammonia is toxic both to people and to polymer electrolyte membrane (PEM) fuel cells and various approaches have been proposed to lower its volatility. For example, Jens N?rskov and his team at the Technical University of Denmark have recently shown that ammonia can be stored as a solid in a metal ammine complex.

Heating the solid forms gaseous ammonia from which H2 can be released using conventional ammonia decomposition catalysts. N?rskov’s recent experimental data for Mg(NH3)6Cl2 demonstrate that ammonia release starts around 350K and that two thirds of the ammonia is released at 500K. The remaining one third is released before the temperature reaches 620K.

Compared with metal hydrides, the metal ammine systems are characterised by more facile kinetics. Mg(NH3)6Cl2 has a gravimetric hydrogen density of 9.1 per cent, a volumetric density of 110 g H2 per litre, a low equilibrium ammonia pressure at room temperature, and the salt can be handled safely in air at ordinary temperatures. Researchers are currently investigating other metal ammine complexes that might be even more suitable for storing ammonia.

Ammonia borane (NH3BH3) also uses ammonia’s storage potential and the borane is a good hydrogen source. It is isoelectronic with ethane yet solid at room temperature and therefore provides comparable gravimetric densities with the corresponding hydrocarbon. However, because it is a solid at standard conditions, it has a far superior volumetric density than ethane.

Gert Wolf and co-workers at the Technical University in Freiberg, Germany, have been investigating the release of hydrogen from NH3BH3 for the past few years. The Freiberg group has shown that this hydrogen-rich material releases up to 12 weight per cent hydrogen at temperatures between 370K and 470K.

Meanwhile, the research team at Pacific Northwest National Laboratory, US, together with researchers at Los Alamos National Laboratory, the University of Pennsylvania and the University of Washington, has been investigating ways to release hydrogen from ammonia borane materials at lower temperatures. In particular, the groups have looked at ways to enhance hydrogen release rates at temperatures below 350K. This would improve the efficiency of the hydrogen storage system because the waste heat generated by PEM fuel cells, which operate near this temperature, could be used to release the hydrogen from the storage media.

The Pacific Northwest team, part of the DOE Center of excellence in chemical hydrogen storage, has developed a way to deposit ammonia borane within the porous channels of mesoporous silica. The silica increases the rate of hydrogen release from the ammonia borane by two orders of magnitude compared with the release of hydrogen from ammonia borane alone. Furthermore, heating the hybrid material above 370K to release the second equivalent of hydrogen gives rise to very little borazine, a volatile impurity that needs to be minimised to avoid poisoning PEM fuel cells.

The drawback of the mesoporous scaffold is its weight. The team is now studying how the scaffold improves hydrogen release to develop a hybrid material that does not significantly add to the weight or volume of the ammonia borane systems.

In addition to carbon and nitrogen based materials there have been interesting new developments with magnesium and boron. Last year, there were two interesting reports of novel storage materials composed of binary mixtures of magnesium hydride and lithium borohydride. 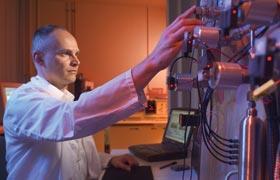 A UK team led by Peter Edwards at the University of Oxford and Paul Anderson at the University of Birmingham has discovered that small amounts of LiBH4 enhance the kinetics for hydrogen uptake and release from MgH2. Adding lithium and/or boron to the material chemically activates the hydrogen stored on MgH2 after a few rehydriding cycles. The team’s current research focuses on elucidating the factors that lead to the chemical activation.

In another study, researchers at electronics firm HRL Laboratories, US, and General Motors developed a new hydrogen storage material using MgH2 and LiBH4 at high ratios of the latter compound. A mechanically milled mixture of LiBH4 and MgH2(LiBH4:0.5 MgH2or LiH:0.5MgB2) and TiCl3 was shown to store reversibly 8-10 weight per cent of hydrogen. Neither LiBH4 nor MgH2 is suitable for a practical hydrogen storage system when used individually because in both cases the dehydrogenation step is too endothermic. In the mixture, however, MgB2 forms exothermically, which partially counterbalances the endothermic dehydrogenation steps and stabilises the dehydrogenated state. In consequence, MgH2 lowers the dehydrogenation enthalpy compared with pure LiBH4.

The dehydrogenation/rehydrogenation steps for the mixture may be viewed as coupled exo- and endothermic reactions, sometimes referred to as ’destabilisation of LiBH4’. They have also successfully extended this approach to other metal hydrides.

The grand challenge for on-board hydrogen storage will require a multi-disciplinary approach combining input from computational and experimental efforts from chemists, physicists, materials scientists, and engineers.

There is a growing interest and developing cooperation between research groups at the international level to work together to address these challenges. For example, StorHy (Hydrogen storage systems for automotive application) is a consortium involving 13 countries that is investigating the whole spectrum of hydrogen storage technologies (compressed gas, cryogenic liquid and solid materials) with a focus on automotive applications.

Last year, the International Partnership for the Hydrogen Economy called for proposals to facilitate international collaboration on critical needs for on-board hydrogen storage. Progress has been made and there are new ideas being critically evaluated but there is still a long road to hoe.