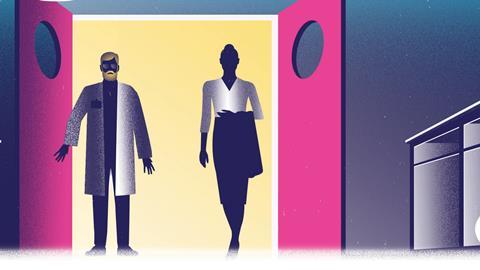 John Gilbey’s story of a world without chemistry continues

Read part one of the story

Looking at James (‘Just call me James’), I wondered whether he was one of a secret stock of clones wheeled out from a storage facility somewhere under Salisbury Plain, but it was clear he was the Voice of Government as far as the university was concerned. ‘I am here to ensure that that this facility is ready to take part in emergency activity as defined in the Public Safety (Miscellaneous Provisions) Act 2025, as amended…’ he began – before Emma stopped him. ‘This is a university, not a government department. You need to understand that.’ James blinked, apparently not used to being stopped in mid-flow. ‘A university, yes – but one which has received substantial funds to compensate for this requirement.’ It was Emma’s turn to look surprised. ‘That’s news to me – but carry on. What sort of “activity” are we talking about?’

‘If I can just check a few facts,’ James went on, ‘how many people work in the Institute?’ I couldn’t resist muttering ‘About half of them…’ under my breath, earning me a sharp jab in the ribs from Emma. ‘About 120,’ she replied. He nodded. ‘And of those, how many are chemists?’ Emma took a long breath. ‘The Institute has a broad remit, but chemistry is really only a virtual teaching area, in support of other disciplines. I guess we could find you a dozen folk with a reasonable grasp.’ James flicked back through his notes, worry lines corrugating his brow. His information, whether through executive optimism, administrative inertia or just plain error, was decades out of date. He clearly believed he was coming to a building full of colourfully bubbling flasks, Bunsen burners and starched white labcoats – a fiction whose bursting was causing him some distress.

As he drank his tea to cover the shock, Emma and I gave James a quick run-down on modern chemistry teaching. Students today do their ‘practical’ chemical work in VR – it’s cheaper, safer and cleaner, we explained. And in higher level courses they might get access to the augmented reality systems which gave an insight into the fabrication facility the Institute runs on the other side of the campus. Definitely a lights-out operation, this can assemble, build, print or otherwise churn out any collection of molecules you care to name, at whatever complexity you can afford. But, laboratories? No, they were mothballed years ago.

The concern is that this is a sophisticated terrorist act

James, his composure restored by some chocolate biscuits, now treated us to a solemn little presentation that revealed why he was so upset. Dead people, it seems, are more than just bad publicity. When you can’t explain why your citizens are dropping in their tracks, other governments get nervous. Almost a week had passed since the first deaths, yet there was still no explanation. The elaborate environmental sensor network which covers the country, including devices like Emma’s Government phone, reported no toxic material or nerve agents. Teams of big data analysts were working long, caffeine-fuelled shifts trying, without success, to find patterns of activity, travel or shopping that would link the victims. Microbiologists worked in vain to find a shared infective organism that could be aiding the Grim Reaper. All the investigations were coming up with a resounding blank, and with no answers other countries were planning to close their borders, divert flights and shipping – essentially putting the whole UK into quarantine.

Emma put into words what I was thinking. ‘So, if you haven’t found anything, what do you want from us? You’ve got much better resources elsewhere, surely?’ James stared out of the window for a moment, as though weighing up how much to tell us, then looked back at Emma. ‘Absence of evidence is not evidence of absence… The concern is that this is a sophisticated terrorist act, one we must assume has also subverted our online resources and is somehow obscuring threat data from us. The medics say this could be just classic poisoning – but they have no way of telling, as their diagnostics use the same network and our neighbours flatly refuse to let any samples out of the country. Your role is to repeat the sample observations that the sensor network reported as nulls or negatives using conventional chemistry. So – is everything ready?’ I made an involuntary choking sound, and James glanced at me oddly. After a pause, Emma said quietly, ‘It’s probably easier if you come and have a look.’

It took me a moment or two to remember the key-code for the double doors of the former teaching lab, but finally the lock clicked and I held the doors open for our visitor. The sense of desolation in the lab was profound. The ceiling grid hung forlornly, stripped of the asbestos tiles it once held along with the ancient light fittings; power cables hung in loose coils, isolated and volt free; under-bench units yawned emptily and sheets of plastic covered the moribund fume cabinets on the far wall. It was the first time I had heard a civil servant use that sort of language – but it wouldn’t be the last.

By mid-afternoon we had a better idea of what we needed to do. Emma grabbed everyone in the Institute with a decent background in chemistry and corralled them into a meeting room to brainstorm the limited available information about the victims that the government was routing through James. A couple of postgrads and I hurriedly inventoried what hardware, reagents and consumables might still be lurking in the building, while Emma assembled a shortlist of potential chemical culprits whose toxicology would match the evidence, then we started a painful assessment of which ones we actually stood a chance of detecting.

It didn’t look hopeful. The remaining instruments were either dangerously ancient or had been scavenged for components, but we did manage to cobble together a working spectrometer from several carcasses – and dispatched someone to hunt out a bottle of acetylene. Glassware was supplemented by the contents of the display cabinets in the foyer, plus oddments that sentimental types had secreted in lofts and sheds years before – and at the back of the stores we tripped over a hoard of AA lamps and some forgotten reagents. Add jury-rigged lights and power cabling, and by the time sensible people were eating dinner we had our proto-lab set up and ready to go. In the circumstances, it was slightly worrying that Emma looked so excited.

I was asleep in a corridor chair when the samples arrived with a discreet police escort. The next hours passed in a blur of half-remembered processes, bad language and the deeply retro smell of a live chemical laboratory. Lamps failed, flasks cracked, power supplies did the big firework but by very early morning we had some results – and a conference call booked with the other groups across the country who had also been dragooned into this shambles.

There is still a chance that this might be viral

Everyone crowded into the meeting room, squeezing onto desks and windowsills so that they could see the 3D tank in the centre of the table. Emma may not have been technically in charge but her evident energy made her the lead. After a round of introductions, and waves to some old friends, we pooled the findings so far. Worryingly, we were the only team to manage any positive results – and by ‘positive’ I mean an indication that a target compound was present in some of the samples. James, and his distant boss, were oddly restrained about the news. How certain were we? Could we call this causal, or was it coincidence? Emma bristled visibly. ‘Look, this is bucket chemistry – presence or absence. Not quantitative. Not an assay. Yes, the samples had some toxic load, but can we evaluate the quantity? No. But how much evidence do you need for heaven’s sake?’

Far away, James’ boss ran a hand over his bald head and sighed. ‘We need to show Europe and the US that we have a handle on this. The borders formally close at 6am – the announcement will be out shortly. At that point, we can expect social disorder, panic, looting… things are going to go downhill really fast. It will be the food riots of 2031 all over again. If – if – we can show really robust evidence that we can manage this, then we might get outside help. If not, they’ll just sit it out and watch. There is still a chance that this might be viral – they just can’t take the risk. People, I need you to go away and think how you can get good quality data. Quickly.’

As the conference links dropped out, a few people filtered out in search of coffee, while the rest of us stayed huddled round the table. Try as we might, we couldn’t figure out how to get the definitive answer we so desperately needed. Assuming (yet another assumption) that the toxin was out there in the environment, in food maybe, we would need a large scale, complex sampling strategy covering the growing number of areas where deaths had occurred. The numbers were way beyond anything we could hope to get through our mash-up of a lab – even if we could streamline the process. I found myself using bad, angry words – loudly and passionately – then realised that Becca, one of the postgrads, was holding out a mug of coffee for me. I thanked her, sheepishly, and she sat down next to me. ‘I think,’ she said conspiratorially, ‘I think I may know someone who can help…’

Read the concluding part of Testing times on Wednesday