The woman that inspired Faraday

Jane Marcet wrote what was to become one of history's most important chemistry books. Hazel Rossotti dips into her pioneering 'Conversations on Chemistry'

Jane Marcet wrote what was to become one of history’s most important chemistry books. Hazel Rossotti dips into her pioneering ’Conversations on Chemistry’ 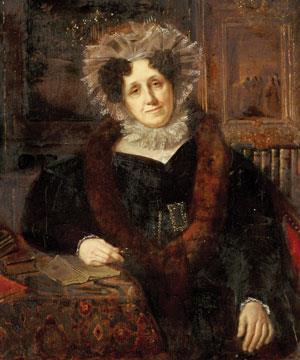 It may seem a far cry from the modern image of the subject but two centuries ago, chemistry lectures were fashionable entertainment for the London glitterati. They weren’t solely the pursuit of male intellectuals - women also subscribed to London’s Royal Institution. Contemporary prints show a number of them attending lectures by its Director, Humphry Davy. Some may have attended for social reasons, or even been attracted by the charisma of the handsome lecturer, but one woman in particular was inspired by the experimental demonstrations. Mrs Jane Marcet was a keen proponent of these events. She wanted to be able to discuss the chemistry with her husband and friends and felt that she, and perhaps other women, would find the lectures easier to assimilate if they were accompanied by some background information. Humbly conceding to being a woman and a ’recent learner’ with ’no real claims to the title of chemist’, Marcet sought to provide this background by writing her book, Conversations on chemistry, in which the elements of that science are familiarly explained and illustrated by experiments. Published anonymously in London in 1806, it became the flagship for popular chemical education during the next half-century.

From tutor to author

Marcet (born Jane Haldimand in 1769) was the eldest child of a London-based Swiss financier and an English mother, and was educated mainly at home by private tutors. Her father held progressive views about the education of both girls and boys, and her lessons, which she clearly enjoyed, included such untraditional subjects as natural philosophy, as physics was then called. When Jane was 15, her mother died and Jane became responsible for running their large household at Clapham and supervising the education of her five younger siblings. She also acted as hostess at soir?es organised by her father once or twice a week that involved dinner for about 40 guests, with more invited afterwards for dessert and discussion. The guest lists for these gatherings included notable politicians, literary figures and scientists, and gave Jane the opportunity for conversation with some of the best minds of her time.

One of the guests was her future husband, the Swiss-born medical student Alexander Marcet, who was later co-founder of what is now the Royal Society of Medicine. Their marriage in 1799 was unusual for the period, as she was 30 and slightly older than him. Alexander moved into the Haldimand household, and the famous soir?es were now attended by his own scientific friends, including Edward Jenner and Humphry Davy.

Jane had attended some earlier chemistry lectures out of general interest, but found the rapid demonstrations confusing. However, the little she had learned helped her to appreciate the ’excellent lectures delivered at the Royal Institution’, probably Davy’s series on General chemistry which started in 1802. She ’became better acquainted with the principles of that science’ by frequent conversations with her ’friend’ (in fact, her husband Alexander, as is clear from his diaries) and by repeating Davy’s experiments with him in a laboratory he had built at home for his own chemical research. She was soon hooked and decided to write a book for those women who lacked her advantage of an in-house tutor. Alexander encouraged her pursuit, as did his friend, the medic John Yelloy, who advised her that ’it is better to elevate the minds of young ladies too high, than to depress them too low’.

The process of writing was punctuated by the births of two healthy sons in 1803 and 1805; and the book went to press in the early autumn of 1805, to be published in two pocket-sized duodecimo volumes by Longman (London) at the end of the year, without any financial input from the author. Alexander wrote: ’when it was all done, we had a most large party’. 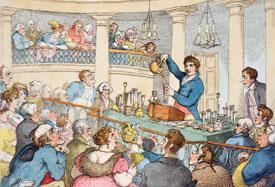 So why should a book, so apparently amateurish, be remembered and admired two centuries later? Marcet’s modesty was justified- she had made no original discovery or interpretation. She wrote simply to share her excitement of learning chemistry. The content followed Davy’s lectures, which were themselves based on Lavoisier’s system. Thus Marcet’s volume I deals with the known ’elementary bodies’ which still included, albeit tentatively, the alkalis and alkaline earths, together with heat (’caloric’) and light. Acids are discussed, together with vegetable and animal physiology, under compound bodies, in volume II.

Although the Greeks had written intellectual discourse in conversational style more than two millennia before Marcet, the use of dialogues for the scientific education of women and children is far more recent. Following Bernard de Fontenelle (1686), those introducing women to astronomy had featured female pupils who were portrayed as bright and interested, but satisfactorily ignorant of science and prone to admire the wonders of nature, intellectual thought, and their erudite tutors. Marcet herself had already written, but not yet published, Conversations on natural philosophy  for her younger siblings.

Marcet was innovative in other ways, which are implied by the two parts of her subtitle. She achieved informality of explanation by lively dialogue between plausible characters. Mrs B is a rigorous but humane tutor who is not ashamed to admit ignorance. Her two pupils are intelligent and enthusiastic, but while Emily is over-earnest and ebullient, Caroline is slap-happy, both intellectually and manually. Their conversation sounds convincing for the period, with Mrs B taking examples from everyday experience and Caroline sometimes mocking her tutor and using less-than-ladylike language. Although Mrs B keeps a tight rein on systematic learning, she makes and allows numerous brief digressions, all relevant to chemistry, and some also related to her pupils’ own interests. These introduce the reader to applied chemistry, and to the rapid socio-economic changes associated with the burgeoning chemical industry.

Mrs B presents chemistry as a subject which is advancing rapidly through exacting experimental work, with exciting discoveries just around the corner. She makes efficient use of lesson-time and expounds sensible views on disciplined study methods as well as the seemly behaviour of female chemists. Her championing of Lavoisier’s new system of chemical nomenclature, while remaining sensitive to traditionalists’ views, could be a model for present-day approach to this contentious topic.

Try this at home

The subtitle also stresses the author’s conviction that hands-on experience should form part of chemical education or, if this is impracticable, that pupils should be shown experiments using apparatus that is fully explained. The plates are engraved from elegant drawings by Marcet, who had learned painting from Joshua Reynolds and Thomas Lawrence; some show instruments being used by delicate female hands. The girls are taught to blow a glass bulb (Caroline ’blowed too hard’), to ignite soap bubbles which they had filled (after sufficient practice) with hydrogen, and to handle concentrated sulfuric acid without (in Emily’s case) getting it on clothing or hands. Their comments on the production of any light, colour, sound, smell or scientific surprise seem so appropriate that the reader almost feels a member of the group. 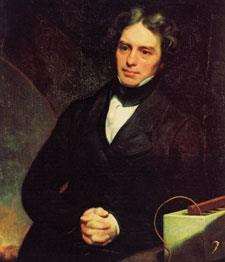 Michael Faraday referred to Marcet as his ’first instructress’

It is perhaps wiser to read about the experiments than to do them because, although Mrs B sometimes exhorts the young not to repeat the more hazardous demonstrations by themselves, a current safety officer might find her unjustifiably relaxed. But Faraday, who successfully repeated ’such little experiments as [he] could find the means to perform’ seems to have come to no harm.

One early reviewer, almost unfazed by the oddity of a chemistry book written by a woman, noted that the content was not noticeably slanted towards female readers. After a number of technical criticisms (some, but not all, of which we would now agree with) he recommends it to all those starting chemistry who ’wish to have the useful mixed with a little of the sweet’ with complimentary comments about the realistic characters and the lively dialogue. And to today’s reader, much of the book still seems fun.

Marcet tried, not always successfully, to keep up-to-date with chemical advances. She asked Faraday and others about their latest discoveries, and revised the book frequently. When the 16th London edition appeared in 1854, Marcet was 84, and the book had sold

20 000 copies in Britain. It was also widely popular in North America but with no international copyright, some transatlantic editions were published as if written by their editors or publishers, and some were substantially adapted for American use. The total American sales of the 15 or 16 American editions can only be estimated, but are thought to be about 140 000. There were also two French editions.

After Marcet’s death, Faraday wrote: ’you may imagine my delight when I came to know Mrs Marcet personally.How often when sending a paper to her as a thank offering I thought of my first instructress .’ But Faraday was not the only celebrity who admired her. When an American student asked Thomas Jefferson how he should set about learning chemistry, he replied ’Read Mrs Marcet’s book’.

One of Mrs. Marcet’s conversations

CAROLINE
To confess the truth, Mrs. B., I am not disposed to form a very favourable idea of chemistry, nor do I expect to derive much entertainment from it. I prefer those sciences which exhibit nature on a grand scale, to those which are confined to the minutiae of petty details.

MRS. B.
I rather imagine that your want of taste for chemistry proceeds from the very limited idea you entertain of its object.

.The object of chemistry is to obtain a knowledge of the intimate nature of bodies, and of their mutual action on each other. You find therefore, Caroline, that this is no narrow or confined science, which comprehends every thing material within our sphere.

CAROLINE
On the contrary, it must be inexhaustible; and I am at a loss to conceive how any proficiency can be made in a science whose objects are so numerous.

MRS. B.
If every individual substance was formed of different materials, the study of chemistry would indeed be endless; but you must observe that the various bodies in nature are composed of certain elementary principles, which are not very numerous.

CAROLINE
Yes; I know that all bodies are composed of fire, air, earth, and water; I learnt that many years ago.

MRS. B.
But you must now endeavour to forget it. I have already informed you what a great change chemistry has undergone since it has become a regular science. Within these thirty years especially, it has experienced an entire revolution, and it is now proved that neither fire, air, earth, nor water, can be called elementary bodies. For an elementary body is one that cannot be decomposed, that is to say, separated into other substance; and fire, air, earth, and water, are all of them susceptible of decomposition.

The RSC’s historical chemistry collection: including the Special and Digitised Collections.

Conversations on Chemistry by Jane Marcet

The Royal Society of Chemistry’s digitisation of the 10th edition of Mrs Marcet’s Conversations on Chemistry, first edition published in 1805.