Colloids find a new use as information storage devices

Already used in everything from paints to optical materials, colloids have found an entirely new application: as computing elements capable of high density information storage.

US collaborators Sharon Glotzer from University of Michigan and David Pine from New York University have designed a system of reconfigurable colloidal clusters which show potential for performing computational functions in unconventional environments. The team’s ‘digital colloids’ are based on specially designed dimpled particles, which, through entropic interactions, can be made to assemble onto a central sphere and explore various configurations on the sphere’s surface. 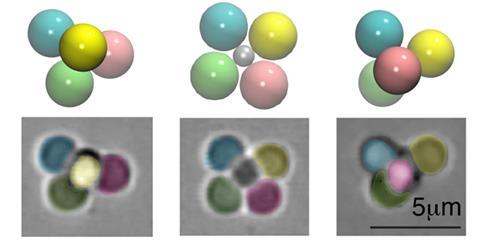 This reconfigurable cluster can store one bit of information, and represents the simplest digital colloid

Using molecular dynamics simulations, the research team explored the configurations that can be adopted by clusters with different numbers of particles. By slightly altering the size ratio of the dimpled particles to the inner sphere, the team could switch between ‘unlocked’ clusters, capable of moving freely between allowed states, and ‘locked’ clusters, where the outer particles are trapped and unable to reconfigure. This system allows information to be encoded into the colloids, simply by locking the cluster in a particular configuration.

The capacity for information storage of these assemblies is determined by the cluster size. The simplest, four-particle cluster is analogous to a computer bit: with only two distinguishable configurations it can store either 0 or 1. In experimental studies, the team assembled an ‘unlocked’ four particle cluster, and showed that it cycled between the two states, as predicted.

Adding more particles to the cluster enables a greater number of configurations to be adopted, and therefore an increased storage capability. The system also allows very compact data storage: just a teaspoon of digital colloids could potentially hold a terabyte of information.

Whilst there is still work to be done – for example in finalising methods for locking clusters and reading stored information – Glotzer sees the digital colloids having future applications in soft robotics and as a complement to traditional computing in liquid and biological systems.  ‘These objects could be made by the bucket, are ready to be encoded, and can exist inside of fluids and in places where it wouldn’t be natural to think of small, floating electronic devices.’

Orlin Velev, whose research at North Carolina State University, US, focuses on functional soft materials, believes that digital colloids address an exciting intellectual challenge: ‘The enormous potential of storing and processing information on the microscale is demonstrated by the live cells, which process an enormous amount of information in their DNA. Our present ability to store information in a similar manner is still very limited and the authors of this study take a visionary approach [to address this]’.