A new account of molecules self-assembling into neuron-like networks may enable the molecular engineering of smart materials and electronics.

In this European collaboration led by Marta Ramos at the University of Minho, Portugal, the researchers investigated the spontaneous assembly of bis-Zn(salphen) complexes into networks of rings and rods with patterns unique among self-assembled systems. Previous reports on self-assembled nanorings suggested that this network formed from vesicles deflating as solvent evaporated. However, the geometry of the assembled Zn–salphen network is inconsistent with the physical expectations of this assembly process. 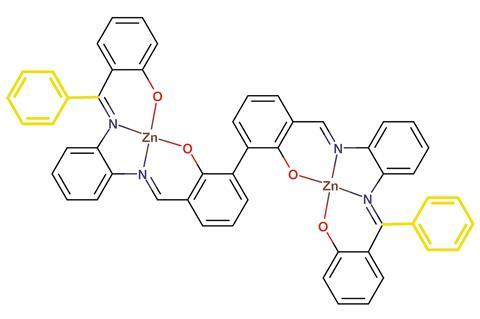 Based on all-atom computational modelling, the team proposes instead that the Zn-salphen units adopt a different conformation to that previously expected. These units form stable dimers which link together into nanorods with sufficient flexibility to form the observed networks. This model accounts for all experimentally observed effects of varying the salphen ligand functional groups, as well as the effects of different solvents on the network assembly.

Understanding and adapting this process could inform the directed self-assembly of such networks into directing agents for carbon nanotubes, with applications in polymer composites and transparent electrodes.