σ meets π for a hole lot of bonding

Researchers in India have provided experimental verification that a co-operative σ-hole and π-hole are responsible for holding the molecules of an isothiocyanate based peptide together in its crystal lattice, showcasing the importance of weak, but highly directional interactions in structure–activity relationships. 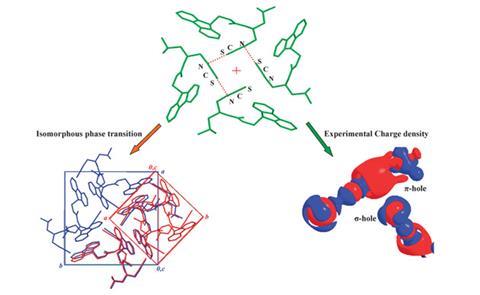 Understanding weak intermolecular interactions, like hydrogen bonding, π-stacking and ion–π-interactions, is vital to probing the relationship between structure and properties for pharmaceutically important molecules such as highly reactive organic isothiocyanates, which display anti-carcinogenic activity.

The crystal structures available for these compounds are rare, so Tayur N Guru Row and colleagues at the Institute of Science in Bangalore were excited to discover that Fmoc-Leu-ψ[CH2NCS] underwent a fascinating reversible isomorphous phase transition upon cooling to 100K. This provided a unique opportunity to probe the topology of the charge distribution and nature of the bonding in detail using experimental multipolar modelling. At this temperature, they demonstrated there was a helical –N=C=S…N=C=S chain formed with a kink at the weak S…N interaction, an interaction comprised of a σ-hole and π-hole simultaneously.

A σ-hole is a low electron density, relatively positively charged area adjacent to a σ-bonded element from groups 14–17. The positive charge lets the atoms act as Lewis acids, and bond non-covalently with electron donors, with halogen bonding perhaps the best known example. Meanwhile, a π-hole describes a similar positive region perpendicular to a portion of the molecular framework. π-holes have been studied theoretically, but until now, there has been limited experimental evidence.

Guru Row says that modelling the charge density was a difficult process as showing an electropositive region on a sulfur atom is ‘tricky and much dependent on the model used’. Initially, the experimental model indicated there was an electropositive region on the perpendicular direction of the C=N bond (the π-hole). However, additional theoretical models suggested the simultaneous presence of a σ-hole. ‘After several trials,’ Guru Row explains ‘we could get both σ-hole and π-hole features in this interaction from the experimental model as well.’

Dietmar Stalke, an expert in high resolution x-ray diffraction data at the University of Göttingen, in Germany, describes the work as ‘truly smashing’ adding that ‘this new type of bonding, experimentally verified for the first time, explains a reversible solid–solid phase transition and adds considerable scientific value to bond theory.’

Guru Row’s group aims to continue their investigations into exotic intermolecular interactions involving atoms in materials from groups 14–17 of the periodic table and hope to establish the link between molecular entities and extended solids.