Project would be BASF’s largest ever investment 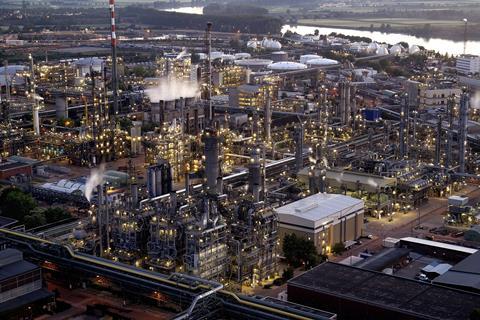 BASF is set to build a US$10 billion (£7.7 billion) chemical production site in the South Chinese province of Guangdong. This will be BASF’s largest investment and will take the form of a highly-integrated Verbund site.

The first plants are slated for completion by 2026, with the entire project to be finished around 2030. The initial phase would include petrochemical plants, notably a steam cracker with a planned capacity of one million metric tons of ethylene per year. This is a starting point for subsequent value chains.

Next, plants for more consumer-oriented products and solutions would be built on the site, for industries like automotive, high-speed railways, aviation or consumer goods. ‘Our goal is an integrated site encompassing cracker products and downstream specialties – such as surfactants and polymers, as well as engineering plastics – to supply sophisticated and demanding customers,’ said a BASF spokesperson.

China – with a world market share of around 40% – is the largest chemical market, and dominates the growth of the global chemical production. The site would ultimately be the third largest BASF site worldwide, following Ludwigshafen, Germany, and Antwerp, Belgium. BASF posted sales of €7.3 billion in 2017 to customers in Greater China, and employed 8,982 people there.

BASF says its goal is an integrated site encompassing cracker products and downstream specialties such as surfactants and polymers, as well as engineering plastics, to supply customers in sectors like adhesives, surfactants, formulation aids, cosmetics, automotive and high-speed rail in South China.

‘If you aim to be the leading chemical company, which is BASF’s ambition, you have to participate in the growth market China,’ said a BASF spokesperson. ‘In this context, our strategy is unchanged: We invest in production facilities close to where our customers are.’

‘BASF already has two such facilities in the US, and China has the largest growth potential from increased consumption per capita, making it a solid choice,’ notes James Ray, senior consultant at ICIS in Houston, US. ‘While the US is currently an advantaged feedstock region, importing crude oil is simpler than exporting hundreds of diversified products. There may be some perceived political aspect factored in due to tariff concerns, but on a $10 billion investment, decisions are made with a long-term view, and that favours China.’

However, shale oil could question the strategic rationale of such plants, according to Ray: ‘Will large mega facilities like this be practical in the distant future as more and more countries develop shale oil, or will we see more regionally based small operations pop up around the globe?’

Ineos recently announced a €2.7 billion investment in an ethane cracker and propane dehydrogenation unit in northwest Europe. The plant will benefit from US shale gas economics, Ineos notes, and is the first cracker to be built in Europe in over 20 years.