It was a mixed year for the sector 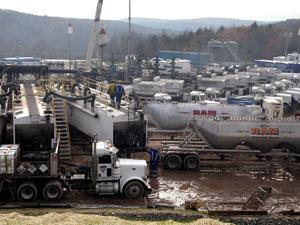 Wipespread shale gas extraction is driving manufacturing growth in the US

The chemical industry had been hoping that weak demand in the second half of 2012 would start to pick up towards the end of the year and then strengthen in the early months of 2013.

Instead, the outlook suddenly became gloomier as forecasters predicted a much deeper slowdown lasting well into 2013.  So the industry – at least in the mature markets of Europe, North America and Japan – may have to wait until the second half of 2013 for the expected revival in sales.

The European commission expects that GDP in the EU will have shrunk by 0.3% in 2012, with a 0.4% decrease across the countries using the euro, the so-called eurozone. Meanwhile, the Organisation for Economic Co-operation and Development (OECD)  predicts that, in contrast, GDP in the US will have gone up by 2.2% and in Japan by 1.6%.

The US economy will expand at a more moderate rate of 2% next year before quickening to 2.8% in 2014.  Japan’s growth, however, will decelerate to 0.7% and 0.8% in the next two years, according to the  predictions of the OECD.

‘The short-term prospects in the mature markets are not great at the moment because chemical output tends in these areas to be aligned to GDP,’ explains Alan Eastwood, senior economist at the UK Chemical Industries Association (CIA) and chair of the economic forecasting panel of the European Chemical Industry Council (Cefic).

Chemical companies in the EU, North America and Japan have tended in recent years to rely on exports to the thriving markets of the emerging economies to boost sales. But those have started to falter under the pressure of a febrile world economy. Some companies will surely continue to struggle next year.

‘The prospects for the emerging markets are better than those of the developed world, but overall they are likely to experience a brief lull in 2013,’  said Amit Sharda, chemicals analyst at Oxford Economics in the UK.

Between March and October, China’s normally rapid growth in industrial production fell for the first time below 10%. In August, it dropped to 8.9%, its lowest level for three years.  But it went up to 10.1% in November raising hopes of a rebound.

‘The slight slowdown in China — together with a very weak eurozone — has impacted trade within Asia, despite strong domestic demand in some places,’ says Sharda.  Chemical exporters in Japan, for example, have been hit by lower sales in China.

Industrial production in Hong Kong fell by 3% year-on-year, in the second quarter of 2012, while in October it went down by over 2% in Singapore.  It also dropped slightly in India in September, according to figures from Haver Analytics, based in New York.

Western European chemical producers, which have been building up export businesses in neighbouring eastern Europe, have been suffering from feeble demand in this area. Industrial output has been fluctuating in Russia with chemicals output this year going down by almost 13%, according to Oxford Economics.

Eastern European producers in the EU have in turn been hit by the poor sales in the eurozone. Chemicals output fell in Hungary and Slovakia and may even decrease this year in Poland, which was the only EU country not to go into a recession after the 2008 financial crisis.

In addition to floundering eastern European economies, multinational European chemical producers have also had to deal with ailing sales in southern EU countries – including Greece, Spain, Portugal and to a lesser extent Italy — which have been the biggest victims of the euro crisis.

The German Chemical Industry Association (VCI) said market conditions in Europe, rather than trends in the Asia Pacific and elsewhere, will have contributed to a 3% drop in chemicals output in 2012. ‘Declining demand from Europe contrasted with a strong dynamic in emerging markets,’ said Karl-Ludwig Kley, VCI president. The association expects improved demand in its key markets next year, with production predicted to go up by 1.5%.

‘Economic uncertainties have been the major cause of the 3% fall in output this year,’ explains Henrik Meincke, head of VCI’s economics department. ‘There have been worries about economic trends and market outlooks in areas like southern Europe and the US and some developing regions of the world. As a result, German companies have been reducing their inventories rather than buying more chemicals. At the same time, the decline has been accentuated by a high growth in chemicals production in Germany in the first half of 2011, when there was an acceleration in the recovery from the 2008 recession,’ he adds.

The VCI is expecting only a slow improvement in demand in the first half of 2013, with problems in the markets of some emerging economies starting to have an impact on German chemical exports.

‘In countries outside Europe, we have seen a double-digit growth in export sales [in 2012], with a 15% rise in countries like Brazil,’ said Meincke. But in some debt-burdened eurozone countries chemicals output has fallen sharply in 2012, with production in Italy, for example, dropping by almost 4%, according to Oxford Economics.  But the slump in output has not been confined to the eurozone.

In the UK, production of chemicals and pharmaceuticals has dropped by around 5% in the whole of 2012. In the three months to October, the year-on-year fall was 7.4%, according to figures from the UK Office of National Statistics (ONS).

‘A major reason for the decrease has been a fall in output of pharmaceuticals, partly  due to movement of  production to lower-cost areas,’ says Eastwood. ‘There has also been a fairly big drop in chemicals output with fluctuations in demand for bulk organics.’

Despite declines in the value of the UK pound, the country’s exports have risen more slowly than imports, which have been increasing at a rate of 1 – 2 percentage points over foreign sales. As a result the country’s traditional trade surplus in chemicals and pharmaceuticals has deteriorated.

‘Historically, we’ve been achieving an average surplus of around £500 million a month,’ says Eastwood. ‘But now we’re recording only around £300?million, and in a couple of months this year we’ve actually had a deficit.’ Cefic is expecting that European chemicals output will have contracted by 2% in 2012. But it should then expand slightly in 2013 by 0.5%. ‘The current EU economic downturn is weighing down on the chemical industry in Europe at a time when other world regions also face challenges,’ says Cefic president and BASF chair Kurt Bock. At the end of 2012, EU chemicals production was still 8% below its pre-2008 level, mainly because of the difficulties in the major customer industries, such as the construction and automotive industries, stemming from the euro crisis and related economic problems in the rest of Europe.

Strength in the US

In the US, on the other hand, there are hopes that the chemicals sector will be bolstered in the short and medium term by the surging output of shale gas, which has driven down energy costs and produced a new source of relatively inexpensive feedstock.

Chemicals output softened in the last months of 2012 because of doubts caused by the deadlock in Congress over an agreement on tax rises and spending cuts – dubbed the fiscal cliff.

‘The spectre of falling off the fiscal cliff has raised uncertainty among business leaders [who have been] throttling back capital spending,’ says Kevin Swift, chief economist at the American Chemistry Council (ACC).

The ACC expects that US chemicals output will have dropped by 0.5% in 2012, before entering a period of steadily accelerating growth driven by the shale gas boom. With the increased investment in projects, the ACC reckons that the increase in chemicals production could be as high as 2.9% in 2013 and 5.4% in 2014 before reaching a peak of 5% in 2015. ?With the help of low-cost shale gas, the US is poised to become a major force in exports of petrochemicals and other bulk chemicals not only in the emerging economies of the Asia Pacific, where it will take business away from Middle East producers, but also in mature markets like Europe.